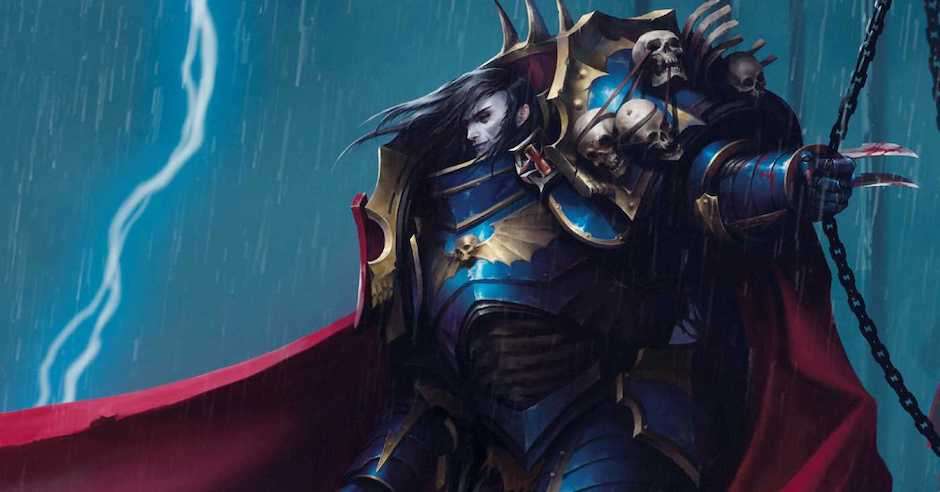 Whether you’ve been reading Warhammer 40,000 fiction for years, or are a relative tyro, you are familiar with the Space Marines. These legendary, genetically-enhanced super-soldiers turn the battle in their favor just by showing up; cutting swathes through their enemies with martial and strategic prowess. All Space Marines; Loyalist or Traitor/Chaos, can trace their roots to a Founding Chapter. Each Founding Chapter, in turn, was comprised of Astartes who were the gene-children of a Primarch; that Primarch being a son of the God Emperor of Mankind. Recently, The Black Library began a novella series dedicated to these demigods; hence, The Horus Heresy Primarchs series was born. Today, I review Konrad Curze: The Night Haunter by Guy Haley. This is the story of the Primarch of the VIII Legion, the Night Lords. Note: this is Book 12 in the Primarchs series (each book, of course, is a standalone tome, allowing you to pick and choose as interests you). 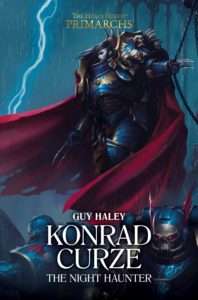 Before we start reviewing the book itself, let’s talk a bit about Primarchs, Founding Chapters, and old 40K lore. Suffice to say, over the past few decades, the lore has grown, been fleshed out, and developed a lot. Looking back on the original concepts for the Founding Chapters, you basically have “Historical Military Faction X….in Space”. Substitute any famous faction for X – Romans, Vikings, Mongols, etc. It was cool at the time; it’s near comedic in retrospect, and it’s a testimonial to the work that’s been done to create the rich, canonic lore we have today.

But what about the Night Lords? Well, you know that extra quiet kid from High School, who wore all black and sat in the back? Remember his doodles in his notebooks? All lightning, skulls, curved, talon-edged bat-wings? Wicked claws and swords? Yeah, the Night Lords were his contribution to the lore. They are the epitome of all those drawings. They are the terror in the night, they are badder than bad.

All jokes aside, the Night Lords are a faction which rules, fights, and subjugates via terror. Their Primarch, Konrad Curze, embodies all of the tenets in spades. Named for Joseph Conrad, as well as legendary antagonist Kurtz, he possesses a true heart of darkness. He is also conflicted, self-loathing, and absolutely mad. In harnessing all of these myriad personality traits (disorders?), Haley has presented us with an utterly fascinating, and overall excellent character study of the madman, his last moments, and some snapshots of what made him who he was.

Of all the Emperor’s immortal sons, the primarchs, it is Konrad Curze whose legend is the darkest. Born in the shadows of Nostramo, a world of murderers, thieves and worse, is it any surprise that he became the figure of dread known only as the Night Haunter? Heed now the tragic story of the creature Konrad Curze, master of the Night Lords Legion, of how he became a monster and a weapon of terror. He who once served the Imperium saw the truth in a maddening universe and the hypocrisy of a loveless father, and embraced the only thing that made any sense – darkness. From the blood-soaked gutters of his hiveworld upbringing, to the last days of his ill-fated existence, Curze is a primarch like no other and his tale is one to chill the very bone…

Quick note: The Primarchs novellas don’t follow strict structural guidelines; hence, they are not all ‘histories’ of the Primarchs. Different authors have chosen to focus on battles, histories, etc., stressing instances which they felt best illustrate the character of the Primarch in question.

The overarching storyline for Haley’s Curze story focuses on Curze’s last days; living in an emotional exile of sorts on the planet Tsagualsa, awaiting the arrival of the Callidus assassin M’Shen (if you are new to 40K, this is not a spoiler: Curze’s assassination is common knowledge). During this period of waiting, he delivers a testimonial of sorts; recounting his life, absolving himself of the atrocities committed by his own hands, and laying the blame for his ails and miseries squarely at the feet of his father, the Emperor of Mankind. These scenes are brilliant, and showcase Haley having a great time writing for this twisted demigod. The motif of “Daddy issues” often comes up when dealing with Primarchs; instead of trying to buck the trend, Haley gleefully picks up the ball and runs like Hell with it. In this scenes, Haley paints C