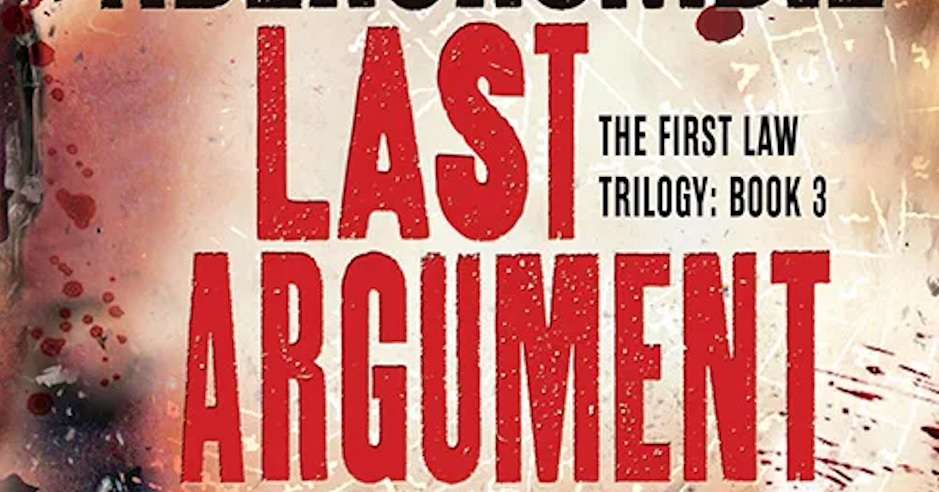 Last Argument of Kings is one of the best final books of a trilogy I’ve ever had the pleasure of reading – actually, scratch that, it’s one of the best books I have EVER read. Seriously, it had moments of laughter, scenes that were so tense I was biting my nails and shocks that had me staring into the darkness of my palms as my hands covered my face.

“I have learned all kinds of things from my many mistakes. The one thing I never learn is to stop making them.” 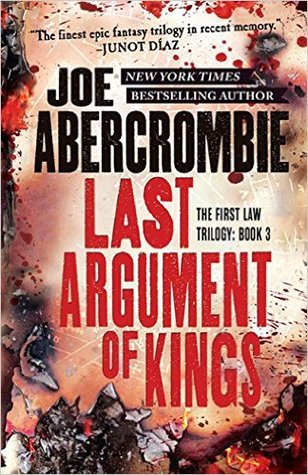 Before They Are Hanged, Book 2 of the First Law was a masterpiece, and Last Argument of Kings completes the trilogy superbly. Bethod, King of the Northmen is a constant threat and there’s only one man who prevents him from conquering the Union, yeah you guessed it, our guy Logen Ninefingers. As Logen is facing the minor task of defeating a whole army, Superior Glokta is up to his usual tricks of torture and blackmail in the capital. There is more of a personal mission for Glokta this time around as it quickly dawns on him that there’s only so many power-hungry lords he can continue to keep pleasing. Jezal dan Luthar is back in the capital seeking to let go of the life he once loved, of fame, women, gambling, to focus on beginning a family with the woman he loves, but can it really be that simple? Again I’m sure you’ve guessed the answer to that one. In true Abercrombie style, nothing is ever simple – you have to be realistic about these things. Also, book 3 brings about the true discovery of who Bayaz is, our questions are answered and he really comes into his own. I’ll leave it at that!

“It’s hard to be done a favour by a man you hate. It’s hard to hate him so much afterwards. Losing an enemy can be worse than losing a friend, if you’ve had him for long enough.”

One thing I love about Abercrombie’s writing is just how clear each distinct voice is. You really know who the POV is from just after reading one sentence and I find that rare, especially one with multiple POVs. The characters are so quotable, with fantastic lines of speech and thoughts, it’s top-quality writing. Each character has ample moments to shine which is exactly what you want in a final entry of a series, I felt so satisfied after finishing Last Argument of Kings – not to mention THAT ending. It was one of those few wide-eyed panic infusing moments that had me desperate for just one more chapter.

“The only difference between war and murder is the number of dead.”

Within Last Argument of Kings is one of the best duels ever. Abercrombie writes action so well, so brutally full of gore. I felt the cuts, the burn of muscles, the panic of battle and the euphoria of victory. The Bloody Nine has some of his best scenes to date here and they gave me the chills, as did Logen’s father’s sayings about war. What I also love about The First Law is the balance of characters. Not every character needs to be or is a legendary sword-wielding beast of a man who smashes his way to victory. Sure it’s good fun to read but there’s none of that here. The characters find their own way to take on battles, literally and metaphorically.

“Rules are for children. This is war, and in war the only crime is to lose.”

I also love how much depth there is to all of the characters even secondary ones such as The Dogman, Black Dow, Ardee, and Arch Lector Sult. There were sections of non-stop action without much pause for breath, and there were other passages of the calm, allowing us to really get into the characters and understand them even more. There were touching scenes in the Last Argument of Kings that added so much to the story and the way I felt about the characters – which I find very rare in a grimdark story.

“You can never have too many knives, his father had told him. Unless they’re pointed at you, and by people who don’t like you much.”

5/5 – I’m sure you can tell how much I loved Last Argument of Kings and The First Law. I would recommend this trilogy to anyone who likes reading. Or just everyone. If fantasy is your thing then this is a must read, and if fantasy isn’t your thing then this is a brilliant starting place to highlight just how amazing it can be when written well. Mr Abercombie, I salute you. I hope to see the likes of The First Law again.