REVIEW: Lawless Vol. 3 of Ashes to Ashes by Dan Abnett

The third volume of Lawless, Ashes to Ashes, has emerged from the mind of Dan Abnett, the world of Judge Dredd and the pages of 2000 AD. 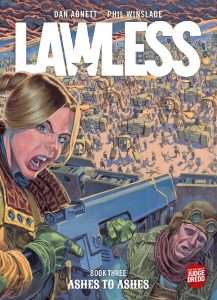 Judge Dredd is, most prominently, the story of a city: Mega-City One. Most of the numerous spin-offs have taken part in Mega-City One (Lowlife, The Simping Detective) or in other mega-cities (Armitage, Hondo City Law). But Judge Dredd has always had its extraterrestrial elements – Dredd’s visit to Luna-1 and the Judge Child Quest are old familiar storylines of this kind. Such elements have sometimes been out of focus – neither Dredd film adaption makes mention of moonbases or space travel or alien visitors. However, Abnett, together with illustrators Colin MacNeil and Phil Winslade has done much in the last decade has much to reintegrate this spacefaring vision of the future into the Dredd-verse once again.

Before Lawless, Abnett and MacNeil created Insurrection – which established resource-supplying colonies for Mega-City One, under a variant of the authoritarian regime of the Judges (‘Judge Marshals’). This was, as the name suggests, a story of civil war: a rogue colony and its renegade marshals against the SJS. MacNeil’s moody charcoal-shaded art was perfect for this, depicting mega-structures and mass violence with equal ease – and Abnett’s ending to Insurrection II was an exquisitely poised cliffhanger.

Lawless takes place after this and at a time of relative peace. Wars both alien and civil are long past; the action centres on the frontier mining town of Badrock. Winslade’s art, from the first volume (Welcome to Badrock) has, despite depicting similar elements (Judge-Marshals, war machines, sentient ape labourers), appropriately adopted a different tone from MacNeil’s with lots of very fine lines and heavily detailed crowd scenes. The future-war tone of Insurrection has been replaced with the SF-Western of Badrock – lots of blasted landscapes, long coats and wide-brimmed hats. Thankfully, this never quite reaches the point of parody.

Of course, Lawless is apt for a Western in featuring the veterans of a Civil War – one of whom is the titular Marshal Lawless, who has been keeping the peace among different settler groups in Badrock. Keeping the peace, by the time of Ashes to Ashes constitutes resistance to attempts by the ravenous Munce Corporation to destroy Badrock.

The underdog qualities and social tensions of Badrock make it a characterful location, bolstered by a likeable recurring main cast. It’s a different feel to the broadly sketched rebels of Insurrection or the irregularly present comrades-in-arms of Dredd himself: more homely, albeit on a world lightyears from Earth.

This said, the Siege of Badrock is awkwardly split over two volumes (Lawless Vol. 2-3, Long Range War and Ashes to Ashes). An immediate jump into the final act in Ashes to Ashes would be inadvisable, and makes me long for an omnibus edition. The conclusion is indecisive and compromised in relation to Insurrection, but that’s a quite deliberate decision – and, for my money, the right one – as we set noble principles against frontier realities. The web of connections Ashes to Ashes draws with Insurrection are a little cruder. While it does no harm for the mystery of Marshal Lawless’s background to be resolved, the reframing of Insurrection is less welcome.

However, the new status quo as laid out by the end of this volume offers a lot of potential for new stories, building appropriately on Insurrection and the first volumes of Lawless. I understand that there will be more Lawless to come from Abnett and Winslade – and I look forward to hearing the news from Badrock.

If taken as a single volume, Ashes to Ashes earns three stars.

Read Lawless Vol. 3 of Ashes to Ashes by Dan Abnett