In Matthew Ward’s magnificent and epic Legacy of Ash, the kingdom of Tressia is coming under attack, but the worst is happening within its own borders—the trodden down Southshires are having a fifteen year old insurrection held over their heads by the north and the governing Council and being left without a standing army in the face of invasion as punishment for the disloyalty of a generation all-but-gone. 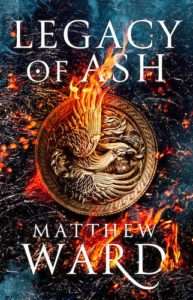 Legacy of Ash shows a world against the last two Of the Trelan family. Josiri and his sister Calenne witnessed the death of her mother and the fall of her rebellion, and are trying to keep her memory alive while simultaneously trying to not draw the might of the Council that crushed her. Josiri keeps being painted into harder and harder positions by his people. He wants the south to rebel against the north as he promised his mother, but the north is in power and the south is under the control of the man who killed his mother. To make it worse, his lowborn comrades who form his groundswell rebellious support seem to want open warfare, in contradiction of his orders for patience. And they aren’t going to wait much longer.

Council member Malachi‘s friend Kassamor is marrying Calenne Trelan, and copping a ribbing for it from his mates. The Southshire-based  Trelan’s are trouble for good northern families, and Malachi’s fellow councillor (and Kasamor’s mother) Ebigail isn’t over the moon about it. Malachi doesn’t have the spine he used to as a younger man, and feels his family has softened him somewhat–he’s going to need to develop more of a spine to manage what’s coming.

Viktor is out of his depth at the council, representing the Southshires whose rebellion he helped crush, and being far less skilled at using words as weapons than his sword or shadow. As a witch, he is hated by his own people, and struggles to balance hiding his true power from the Council against his people’s vision of him as Tressia’s towering champion and the Southshires hate of him as the murderer of Katya Trelan.

Melanna wants more than to just be a political tool her father can marry off to pump out heirs. She wants to stand in the shield wall like a prince, she wants to lead, she wants to fight and conquer the Tressians as a true child of an emperor should. And, when her father passes, she wants his crown. As she follows her father across the mountains and into the lands of Tressia, where she rails against the constraints of her people just for being born a woman, greatness rears its ugly head.

Now, take a breath. That’s a lot to take in–A Game of Thrones-level cast and enough politics and alliances and hatreds to sate even the thirstiest epic fantasy fan. There are plenty more PoVs for you to get engaged in, but if that foundation chock-full of the powerful and the powerless driving their own agendas through intrigue, betrayal, and massive bloody battles doesn’t have you licking your lips in anticipation of what is to follow in this 700-odd page epic dark fantasy, than I’ll be buggered if I know what will.

Somebody get me a cigarette and a whiskey because Matt Ward has just taken me to reading heaven. Legacy of Ash is a magnificent book, and I cannot wait to see what comes next.