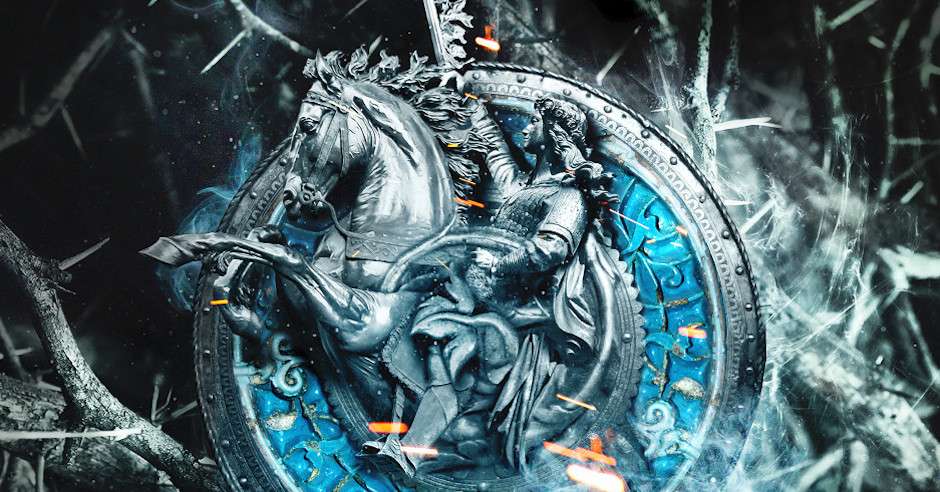 In Matthew Ward’s barnstorming and epic follow up to Legacy of Ash, the battles are bigger, the characters more epic, the stakes higher, and the payoff phenomenal. Strap yourselves in, because after Legacy of Steel you are going need a few stiff drinks to calm your nerves. 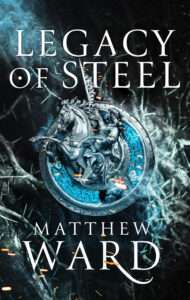 Melanna Saranal saves her father from an assassin, and in the process brings the goddess Ashana back to the Hadari lands to help her people’s emperor to glory. Unfortunately for Tressia and its inhabitants, to Melanna Saranal’s father Kai, that glory is providing his daughter with a much larger empire, and he has his eyes firmly set on Tressia. He’s struck a bargain with the goddess Ashana to break an unbreakable fortress and bring the full might of his people forth to purge the Dark from the lands of Tressia.

In Tressia, the Crow Market is getting increasingly bold. New Privy Council member Josiri Trelan is struggling with much the same problem as we saw Viktor Akadra face in book one—his nature as a doer is not working when the battles are being fought with words and temperance , as opposed to with soldiers and swords. This new Privy Council is trying to cement its standing in this new world, and Josiri is struggling to remain in its good graces. To make matters worse, head of the Privy Council, Malachi, is still under the control of the Parliament of Crows, and they are digging their claws in ever deeper.

Apara the Kernclaw (assassin) isn’t so sure about the human sacrifice offerings the Parliament of Crows is putting up to try to draw the eye of ancient gods to pull them up to their former glory, but she knows she must do what she must do for her family. But now, her loyalties are split between them and the kernel of the Dark that Viktor Akadra put into her chest that means she must attend when he calls.

Roslava Orova, the Tressian Council’s Champion, is on the border of the Tressian empire and the oddly quiet Hadari Empire (where Melanna’s father has just raised a new host). And she’s now being asked to do the hardest thing she could imagine—take two days leave and talk to people while the front is quiet. Rosa’s lover, Sevaka, having shed her Kiradin family name and taken command of a ship, has joined Rosa on the Tressian border, and has been hooked into Rosa’s talking duties. They won’t be just talking for very long.

Legacy of Steel is one long brutal battle of a book in all the best ways. Our many characters are stretched to breaking point; new characters are brought in both human and god and new conflicts built upon the old ones; and fan favourites meet their untimely demise. I’ll say it again, that if you like Game of Thrones-level casts and unexpected character deaths, then this series is for you.

Ward’s character development in Legacy of Steel is excellent, and actually one of the many reasons you just never quite know who is going to die. You find yourself invested in so many of them, that when each one dies it’s heartfelt and it matters and that, good sirs and madams, is damned fine storytelling.

Ward’s writing throughout is also beautiful to read. There are no wasted words and Ward has so much to say.

The middle of the book, for me, requires special mention. Ward just delivers hammer blow after hammer blow, chapter after chapter. It was so good at this point that I just could not put it down. The author set a brilliant foundation for the story at the start of the book, and then just crushed my expectations and hopes before rebuilding them anew as he drove towards an epic climax. The amount of times I looked over at my wife with my jaw hanging open is just magnificent.

In Legacy of Steel Ward takes everything that was good about Legacy of Ash and dials it up to 12. By the time I hit the last ~10% I was exhausted. The story just got so massive. But, true to form, Ward knows this and brought me back to a manageable pace for a short time before sticking the boot in once more. He’s brilliant at knowing how hard he can push a reader, and then how to get your guard down once more so he can deliver a final stinging riposte as you go through the last few pages.

It does leave a conundrum though, with all the epic plays happening by the end of book 2 WILL THERE BE ANYONE LEFT FOR BOOK 3!!!??? The lands must be running short on leaders, soldiers, people, probably dogs and cats, too. Ward faces a problem of having to figure out how to dial Legacy of Light up to 14.

Legacy of Steel is a massive read. It’s a brilliant book two of a trilogy, and I cannot wait to get stuck in to book three.