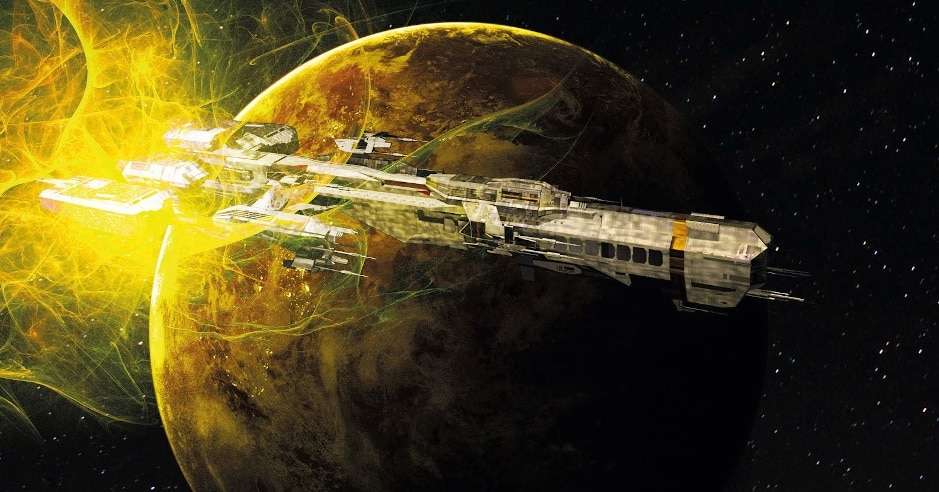 Having gleefully consumed the adventures of the Trouble Dog and her crew through Embers of War and Fleet of Knives I was very much looking forward to tackling Light of Impossible Stars to wrap up the trilogy. 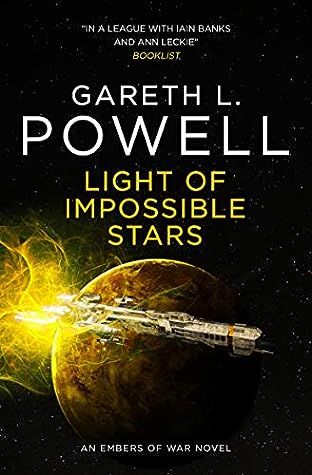 However, the story starts with a brand new character. Cordelia Pa is an orphan scavenger on City Plate Two – the Plates being another curious megastructure built by an ancient alien race – scrabbling for a living amongst the alien ruins. That is until the trading ship, Gigolo’s Aunt arrives and the crew say her dad has sent them to collect her.

Meanwhile, the Trouble Dog and it’s small flotilla of refugee ships and the Trouble Dog’s own penitent sibling Adalwolf are fleeing from the Marble Armada’s onslaught and the increasing threat of hypervoid dragons. They hope that they can seek refuge or find a way to fight back in the area known as the Intrusion.

Throughout Light of Impossible Stars, as with the rest of the Embers of War series, we see our characters torn between duty, survival, personal whim and what is probably the right thing to do and different characters respond very differently. In a universe which is coming apart and there are no good choices, this feels like the essence of grimdark to me.

Just as was the case in Fleet of Knives, Light of Impossible Stars mixes things up with a brand new point of view character in Cordelia and she is both one of the most interesting characters in the whole trilogy and the most important to the plot.

Cordelia transitions from a destitute orphan to captain of a starship and plays a significant part in the conclusion of the book, which is an arc more significant than any experienced by any other participant in the series.

Some of our returning protagonists however seem almost passive. Sal Konstanz comes across well but almost wholly reactive to events. Now, that’s a realistic place to be when you’ve lost crewmates and your civilization is collapsing and you’re probably going to die but I feel like she’s lacking as a key protagonist. Of course, that might be the point – that you don’t always get a neat resolution or to steer your path much.

Along the way, we lose a few more of our crew and just as before, they go quickly and without much fanfare. The lack of a big death scene feels a bit unfair, but it is entirely in keeping with the themes of the book. Sometimes, you don’t get to say goodbye.

That balance of grittiness and the need to refuel and rearm, along with the fight against a seemingly implacable cosmic horror puts me in mind more than a little of Warhammer 40k, even in this space opera style book.

Nod is once again a delight and the view of the Druff homeworld is a piece of glorious world-building, as is the conception of the Plates. This sort of grand space opera imagery is certainly something that Powell excels in.

I was a little disappointed that morew was not made of Lucy, who as a seemingly human child who contains the combined consciousness of two ships, had wonderful potential to be enigmatic and vital but is almost an afterthought in Light of Impossible Stars.

Powell handles some controversial issues well, using them to hammer home the point that the disruption of war affects people in more ways than just loss and dislocation, but in the curtailment of choicers and self realisation.

My main criticism of Light of Impossible Stars is one that is endemic to space opera and that is the way that the finale seems to be over too soon and comes in a somewhat deus ex fashion. This conclusion seems unearned and a tad anticlimactic but is also fitting with the general theme of the series in that war is hell, life is unforgiving and you have to make the best of what is in front of you.

I loved what feels like a slight nod to Iain M. Banks in Trouble Dog’s final chapter which teases so much and could potentially have fixed some of my issues about characters lacking resolution. Maybe that’s another series to come in the future.

All in all, Light of Impossible Stars is a solid read that will appeal to fans of Iain M. Banks and Warhammer 40k and while it didn’t light me up quite as much as it’s predecessors, it’s a solid landing for an ambitious trilogy and well worth your time.