Mass Effect 3 had an ending that could be described as ‘controversial at best.’ Mass Effect: Andromeda did fine commercially but was definitely not the shot in the arm that the franchise needed. And so, when looking at what could be done with this beloved franchise, EA opted to remaster it. It worked. Mass Effect: Legendary Edition was a huge success.

The main differences between the originals and Legendary Edition are graphics, and some improvements to gameplay. Notably, Mass Effect 1 had improved controls for the Mako, the tank that originally drove like a helium balloon on wheels. Additionally, all of the DLC (minus Pinnacle Station for ME1, which was completely corrupted in the interim between ME1 and ME:LE) was automatically included in each of the games. Loading time was also largely eliminated. The controversial endings were extended and improved upon, and the multiplayer from ME3 was cut out.

Mass Effect is a science fiction series about Commander Shepard trying to save the galaxy from the Reapers, massive technological monstrosities that come and destroy space-faring civilizations every fifty thousand years. 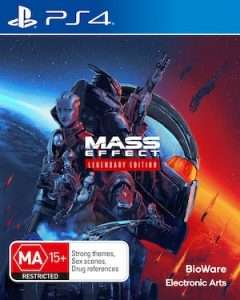 Humans are new to galactic politics. In 2148 we discovered Prothean artifacts on Mars that jumped our technology ahead drastically, and the first game takes place in 2183. There are Mass Effect Relays that let spaceships travel nearly instantaneously between two different parts of the galaxy.

In the meantime there was a war between the turians and humanity, as humanity, not knowing better, tried to open a closed Mass effect Relay.

There’s the Citadel, a massive superstructure that houses millions of aliens. It’s also the head of galactic politics and has the Council, with representatives of the three most politically powerful alien races—the Turians, a proud military race, the Salarians, who are short-lived and tend towards science, and the Asari, an all-female race who live for around a thousand years and have powerful biotics (control over gravity, mostly).

Mass Effect 1 starts with Commander Shepard being considered as the first human candidate for the Spectres, the Special Tactics and Reconnaissance agents. Spectres are given full authority to pursue their goals however they wish. His first mission, to uncover a Prothean artifact on a planet named Eden Prime, goes sideways. First, he’s exposed to the artifact, which plants alien images in his mind. Then, another Spectre named Saren shows up to take the artifact beforehand.

No one knows why Saren is doing this, and Shepard has to prove to the Council that Saren has indeed gone rogue. Then he gets his team together and they hunt out clues through the galaxy.

The first Mass Effect feels most like classic Bioware, in that the set-up is: Introductory mission, quest hub, missions able to be done in any order, and then the grand finale. The gameplay itself is still quite awkward, even in the Legendary Edition. However, the story is extremely strong. While Therum (a mine) isn’t thrilling, Feros (a human colony with a creepy secret) Noveria (science labs that have gone silent) and Virmire (Saren’s base of operations) are all excellent, and Ilos is my favorite sequence in the whole series.

The second Mass Effect is the weakest in its main story, but its characters are the best the series has ever been. Shepard is flying the Normandy when its destroyed by the new villains, the Collectors. Shepard dies, and is rebuilt by Cerberus, a human supremacist group. They want him to lead a team to destroy the Collectors.

The main plot, like ME1, has four real quests before the end. Unlike ME1, they are in a specific order. Instead, you can do ‘Dossier’ and ‘Loyalty’ missions between them in whatever order you choose.

Much of the game is devoted to getting your squad, and then earning their loyalty. These missions are almost all excellent. Gaining your squad includes plots like a prison break, curing a disease, and searching a planet with a sun so hot it kills. Of the loyalty missions, there’s a heist, there’s a pit fight with a thresher maw, and there’s a completely combat-free thriller where you offer yourself up as bait to a psychic serial killer. Only one of the loyalty quests is subpar, and luckily it’s short.

The ending of the game consists of a suicide mission to the Collector home world, in which, if the wrong decisions are made, numerous squadmates can die. In various scenarios, you need people with tech expertise, or biotics, or leadership skills, or simple firepower. If enough of them die, then so does Shepard. Despite Mass Effect 2’s popularity—it’s the highest rated of the series—no other game has tried this kind of experience again, not even its own sequel.

Mass Effect 3 opens with a Reaper attack on Earth. Shepard escapes to try and rally support of the rest of the galaxy to Earth, and soon arrives at Mars, where more Prothean knowledge has been uncovered. There are designs for an ancient weapon that may stop the reapers, and now it’s Shepard’s job to get the various alien races to join forces to slow them down while scientists work on building this new weapon.

Mass Effect 3 is the most linear of the trilogy. While there are plenty of side quests, the main quests are all in order. First, you help the turians, but the turians need the krogans before they’ll help Earth, so you need to help the krogan. Then, you need to help deal with the Quarian/Geth war. Then, the asari. Often, you’ll have to fight Cerberus. Given that twice you get top-secret, in-person briefings on sensitive materials only for Cerberus to immediately know where to attack, my headcanon is that they chipped a transmitter into Shepard when they brought him back