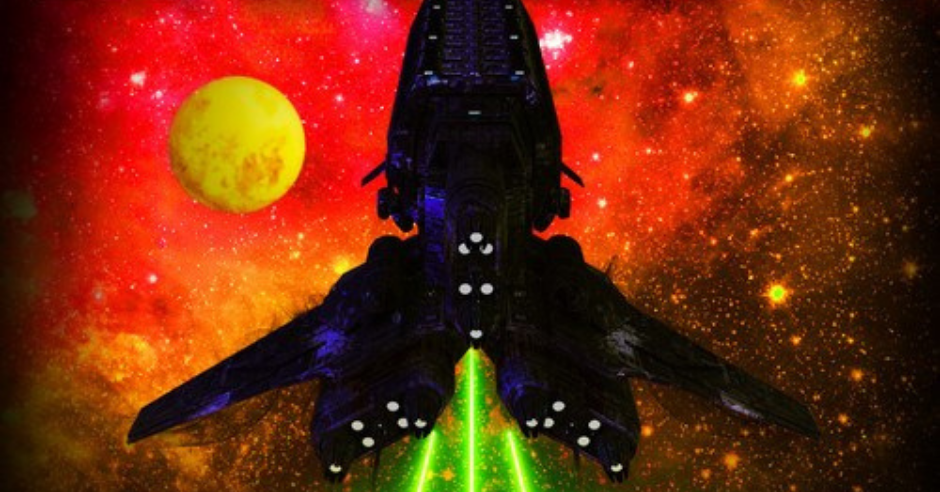 Memoria, Kristyn Merbeth’s second book of the Nova Protocol series, is another fun dive into the world of the dysfunctional Kaiser family. In the first novel, Fortuna, Kristyn Merbeth introduced us to the Kaiser family led by the reincarnation of Momma Fratelli from Goonies as the Momma. Momma reigned over her brood of thieves, swindlers, and smugglers with an iron fist. She was sparing of praise and love, no more so than with Scorpia Kaiser. In the first novel, Scorpia is the pilot of the family ship, Fortuna. She suffers from Middle child syndrome, where she feels not as good as her older and disappeared brother Corvus, nor does she get a pass on her actions like her younger siblings do. She spends a good part of the first novel drinking her problems away. 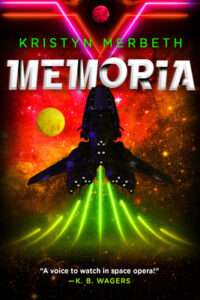 Corvus, on the other hand, was newly returned from the war in the first book. He left, against Momma’s wishes, breaking cardinal family rules by disobeying her. The dynamics between the Kaiser family’s siblings told through Scorpia and Corvus’s eyes is spectacularly chaotic but changes as they grow, learn, and come into their own. Memoria, the second book of the Nova Vita Protocol series, is releasing this month. It is a continuation of the drama from the first book, again told through Scorpia and Corvus’s eyes.

In the first novel, Fortuna came off as a character study of sibling dynamics and how people fold or grow under pressure. Memoria is a continuation of these developing characters coming into themselves set against the backdrop of war and vengeance, much out of their control, but they get swept up in it.

When I reviewed the first story, the main issue I had was that I did not empathize or care about the two dueling narratives. The worldbuilding was interesting and well done, the action was fast-paced, but when it came to reading about Corvus and Scropia, it held me back from falling into the story. In the first book, Scorpia was a mouthy caricature. She almost got her entire family killed twice, and none of it felt balanced by the other family members. I wanted to like her, and I wanted to cheer for her. But most of all, I wanted to slap some sense into her.

We have come a long way in Memoria.

Memoria’s Scorpia and Corvus had many of the same issues that plagued them in the first series. Scorpia is a mouthy alcoholic that makes stupid impetuous choices. But this time around, the gravitas of their situation as a family and how her choices directly affect her family is changing. She is becoming a wiser leader and the Captain she has always wanted to be. Scorpia is someone I can see and understand more, and throughout the book, she comes more and more into her own. I loved that, I wanted and needed a wiser Scorpia.

Much the same can be said about Corvus. Corvus had his own set of issues to deal with in Memoria. I think much of that is Corvus is learning to stand on his own. He knows what is right, even if he has to stand against those he revered and loved. It is a great thing to see, as I have liked Corvus from the start of the series, but I like him even more now.

The plot and pacing were excellent in Memoria. The action has lulls, but those pauses give the story a more realistic feel. The action scenes are well crafted; you can tell that Merbeth appreciates tight and well-done action. One of the most exciting is a prison break out scene near the beginning of the story that is breathless with excitement.

Many of the problems I had with the first book have disappeared. The idea of the dysfunctional band of smugglers is still there. A very Firefly vibe, but Merbeth is coming into her own with these characters. It felt like a fuller and rounder story. The siblings outside of Corvus and Scorpia are not flat anymore, they have more definition, and the dynamic of how they fit into this band of misfits is more apparent.

I mentioned that I did not think I would be continuing with the series in my original review for Fortuna, but I am so glad I did continue. Memoria was a treat. A solid space fantasy with fun characters and a great plot. I think that if you hadn’t read Fortuna, you could start with Memoria if you wanted to. You will miss some of the subtleties and character growth, though. So if you are interested in the Nova Vita Protocol, start with Fortuna, get introduced to Corvus and Scorpia. It will take you into Memoria, where you will have a solid foundation, and you can start loving thes