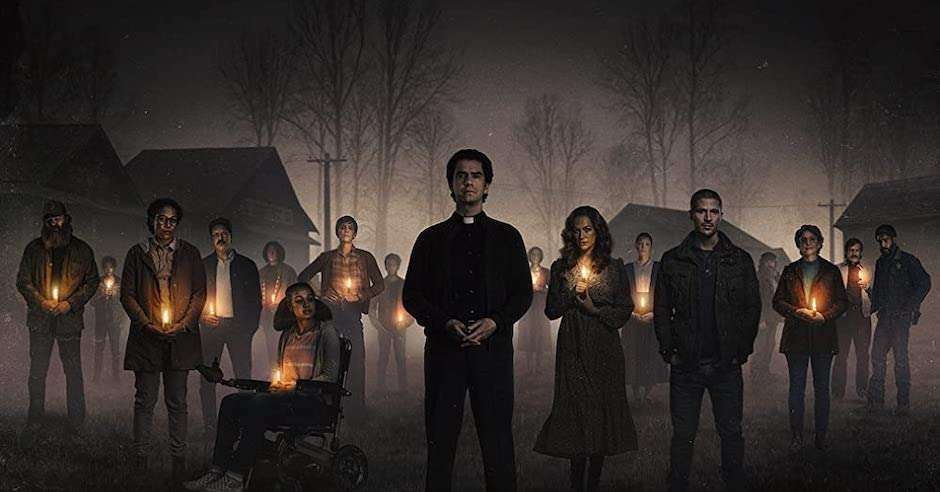 After the brilliant Haunting of Hill House and (the not as great but still good) Haunting of Bly Manor, director Mike Flanagan continues his Netflix horror streak with Midnight Mass, a slow-paced mini-series set on an isolated island where the inhabitants are forced to deal with supernatural events that follow the arrival of a charismatic priest and a young man still dealing with the demons of his past. 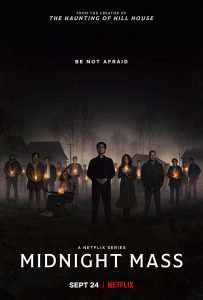 Midnight Mass is absolutely bonkers at times. It’s a show that takes risks in places and follows the predictable path in others. The setting of Crockett Island is a character in itself, as in all the great horror stories, and Flanagan – who directed Stphen King’s Doctor Sleep – displays the influence of King in creating a sinister and unsettling setting with long, slow shots and scenes that would work well on London’s West End as the actors are given time to deliver long monologues and build tenson within the important interactions between the few characters in the series. Riley Flynn (Friday Night Lights Zach Gilford) returns to Crockett Island after time spent in prison for drink-driving and killing a young woman. Drowning in self-doubt and the guilt of his actions, the atheist Riley has to contend with his own demons as the religious town suddenly finds its faith strengthened with the arrival of Father Paul, who is played with charismatic perfection by Hamish Linklater.

The religious themes in Midnight Mass aren’t exactly subtle and with that title, why should they be? Forgiveness, guilt, death, redemption: the use of Catholicism brings all these themes together and Flanagan then twists them all into a gothic, vampiric horror designed to unsettle the audience. All the characters in the show are flawed to some extent and facing demons of their own, figurative at first before the final few explosive episodes bring literal demons to fight against. Flanagan uses the series to study the purpose of religion. The characters in the show highlight both the positive and negative aspects of religion, from the strength it gives characters like Riley’s parents as they struggle to move on from their son’s actions, to the way in which devout zealot Bev Keane uses her faith to poison the town and discriminate against any who she deems unworthy. Midnight Mass isn’t afraid to ask big questions and it is Riley’s conversations with Father Paul where the show really shines. Asking things like, “Why does God allow bad things to happen to good people?” gives the series the opportunity to tackle some big ideas and Linklater and Gilford are perfect in their roles during these heavy scenes.

The horror in Midnight Mass is more akin to King’s work and the incredibly underrated Korean film Thirst. Midnight Mass makes you uncomfortable and provides a few jump scares along the way with some blood and gore dotted through before the chaos and action of the final couple of episodes. It is a thoughtful horror mini-series that tries to be something more, something profound. Whether it hits or misses in that aspect is something that will be personal to each viewer but it is clear that Flanagan is an incredibly talented director here working with a cast on top of their game as they attempt something interesting with a story that starts quietly before building to a flaming crescendo.

Midnight Mass is a slow burner that may not be for everyone. This supernatural horror mini-series is dialogue heavy with more of a brain than most series in its genre and just enough blood and gore to keep horror fans happy. Great acting, an unsettling setting, and one of the most terrifying angels you will ever see on screen, Midnight Mass is another brilliant horror from a reliable director.