After reading Beyond Redemption last year, I confess to a giddy anticipation of the sequel—The Mirror’s Truth. When GdM alumnus and friend Michael R. Fletcher offered me the opportunity to preview it, of course I jumped on it. It would have been crazy not to, right?

Readers of the first book will remember that it took place in a world gone mad, where the insanes’ delusions defined reality and where the more delusional you are, the more powerful you are. These powerful, deluded people are called Geisteskranken. One of the only sane people left in this deluded world, Bedeckt (an aging warrior), traveled the world with two powerful friends. First there was Stehlen the Kleptic who was a rogue beyond compare—stealing and killing whenever she wished without being caught. Bedeckt’s other companion was Wichtig the World’s Greatest Swordsman—as he told anyone within earshot. While Wichtig was very skilled with the sword, his particular Geisteskranken talent stemmed from his charisma and ability to convince his opponents that he truly was the greatest. 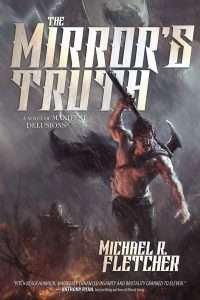 Our trio’s adventure revolved around kidnapping a godling to get a portion of his power and in classic grimdark style, Beyond Redemption ends with much killing and Bedeckt finds himself in the afterlife to end the book.

In The Mirror’s Truth, we open with Bedeckt finding a powerful mirrorist who somehow brings him back to the world of the living. His primary goal is to kill Morgen and thwart his plans for the world; however, Zukunft (the sexy, young female mirrorist who brought him back to life) has other plans setting him on a side mission to rescue a child in peril. Bedeckt has a soft spot for children having always lived his life by a certain set of rules (one of them being not to hurt women or children). Trusting in his mirrorist companion’s predictions, he allows himself to be diverted from his mission.

Meanwhile Morgen, knowing that Bedeckt is coming, has set both Stehlen and Wichtig on separate missions to find Bedeckt, telling them that Bedeckt abandoned them to the afterdeath and knowing that they will likely kill him for his betrayal.

The return to the world of the living is not easy for the three former friends as they soon discover that many years elapsed while they were in the afterlife, where time flows slower than in the world of the living. Wichtig, expecting to go find his young son—who is now a young man if he still lives—is devastated. For some reason, these lost-time storylines always hit my soft spot.

I really like what Fletcher did with this story as far as expanding on the divide between the three main protagonists established at the end of Beyond Redemption. I was intrigued by the way he explored all of their mixed feelings with each other, how they all made at least token efforts to move on and discovered that they had deeper bonds with each other than they were all able to admit to themselves. I particularly enjoyed that angle since self-deception is at the heart of the world that Fletcher has built in this series.

The Mirror’s Truth also introduces several more uber-powerful Geisteskranken who are near their pinnacle (the point at which their insanity peaks and they self-destruct in some way, shape or form) and provides some pretty insurmountable obstacles for our stalwart trio to overcome. One of them is a shape shifter who thinks he’s a huge dragon and enjoys dropping people and livestock from great heights—aiming of course for the other characters. Another of the three thinks she serves the earth goddess and bends the earth (mud and rock mostly) to devastating effect. Probably the most deviously clever Geisteskranken though is one who believes all people to be possessed by demons and kindly exorcises them—of course killing them in the process.

All of these well-adjusted people are on a collision course with destiny, the parallel storylines converging nicely at the end to provide an incredibly satisfying conclusion.

I found The Mirror’s Truth to be written well but still accessible. The plot moves quickly and so did I, finishing much quicker than I really wanted to. That is not a dig at Fletcher though, I had trouble putting it down once I was immers