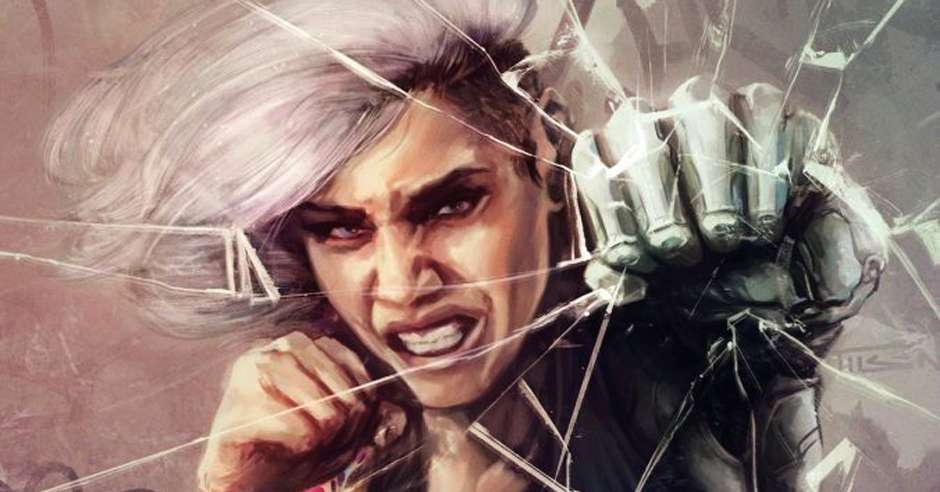 While Necrotech is ostensibly cyberpunk, its darkness and violence are enough to earn it a place in the grimdark sci-fi category. The protagonist, Riko, is a violent, vulgarity spewing “splatter specialist” in a dystopian near-future. She’s got moral ambiguity and her world is a gritty urban hellhole where the tech in your body is as likely to turn you into a monstrous abomination as it is to give you the edge on your competition. 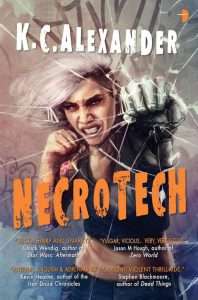 Riko earns her keep doing criminal jobs on a freelance basis. When we first meet her, she’s freshly awoken in an unfamiliar corporate laboratory, has a couple of months of missing memory, and is surrounded by armed paramilitary guards. Shortly afterwards, she sees her girlfriend, Nanji, going full “Necro”, a process where a person’s nano-enhancements go feral and turn their owner into a ravenous zombie. The evidence points at the laboratory having experimented on Nanji and caused her death.

Riko escapes and returns to the relative safety of the criminal underground. Unfortunately, one of the members of her usual team is the brother of Riko’s girlfriend, and now they think Riko is responsible for her death. And given that she woke up in a corporate lab and has a chunk of time missing, no one on the street is inclined to trust her. Needing to regain her all-important “cred”, a sort of street status that influences everything from the fee a freelancer can command to their chances of getting murdered, Riko sets about demolishing her way through all and sundry in search of answers.

Necrotech makes much of the protagonist’s snarky attitude and full-frontal approach to life. This is further pushed home by the first person point-of-view, so the narrative is all Riko all the time. Riko is independent, opinionated, violent, pervy and confrontational. While this sounds hip and cool, I have difficulty sympathizing with Riko’s character. My lack of sympathy is only in part due to her snarkiness, her constant predilection to beating people up for little reason, and the near constant stream of expletives that colours both her dialogue and internal monologue. After all, what grimdark reader doesn’t have a soft spot for a disagreeable protagonist? The deeper problem is that Riko completely lacks resourcefulness and common sense.

For example, there’s a scene where she’s awaiting airborne extraction from a city block infested with “Necros”. After the extraction team repeatedly ask her for her position so they can extract her, she takes to launching angry, smart-ass expletives at them because she doesn’t know her location. Take almost any situation in the novel and Riko charges in and does the dumbest thing imaginable. She creates conflict for no discernible reason other than it’s in her nature, and her whole personality seems the converse of the skilled operative we are expected to believe that she is. As another example, leading up to her incursion into Necro territory, we are lead to believe that time is of the essence. Riko wastes time joking around and goof balling rather than doing anything that logic demands. Details such as these are cartoonish and at odds with the gritty details and violence.

The plot logic is also wobbly at times. At one point, she obtains help from a corporate patron of sorts, a well-connected man named Malik. Malik cops an inordinate amount of snarkiness and overt threats from Riko. Yet, he is unfazed and provides her the resources on what appears to be a very sketchy payoff. She never questions the risk/reward logic of him helping her and, despite his help being essential to everything she wants, she continues to insult and threaten him at every juncture. In reality, it is difficult to imagine anyone sensible giving their time and resources to a street-level mercenary such as Riko, much less doing so when she’s behaving like a spoiled child.

It’s this lack of credibility that makes the gritty, violent aspects difficult to swallow. Riko spends so much time smart-talking that she’s impossible to accept as anything but a parody. She makes so many unsubstantiated threats that after a while it becomes comical.

I also find it weird that Riko would be totally perturbed by certain violent situations and then display completely different, nonchalant thought processes for other violent situations. In one scene, she has a shotgun held to her head and seems to think nothing of it, but later she freaks out about a slew of dismembered Necros. Or she’ll be in the middle of a desperate situation, death around every corner, and she’s eyeing her surviving team member’s cute backside. Huh?

Despite the sci-fi setting, the profanities and the level of violence, the voice itself has a very urban fantasy feel. Riko has the self-consciousness of an insecure urban fantasy protagonist, dissecting anything and everything about herself in any given moment of the day. This is especially evident at the beginning of Necrotech where, between every action, there seems to be two lines of introspection. Unfortunately, Riko’s voice isn’t engaging enough to win me