REVIEW: Nectar for the God by Patrick Samphire 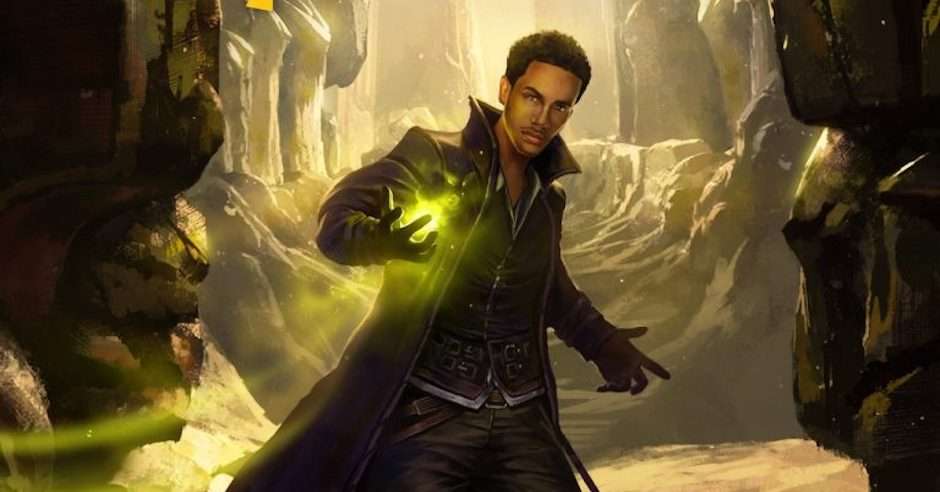 It took exactly four sentences for me to become so engrossed in Nectar for the God that I was annoyed by any interruptions to my reading. Once again, author Patrick Samphire crafted a book that is impossible to put down.

“With a smile and a nod to the other customers, Etta Mirian left the bakery, crossed Long Step Avenue, and stabbed Peyt Jyston three times in the neck. She then turned the knife on herself and, still smiling all the time, opened her throat from side to side.” 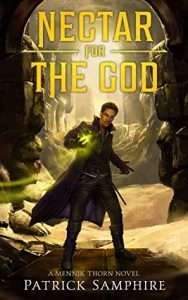 The reader finds Mennik Thorn slightly the worst for wear after the events in Shadow of a Dead God. He’s been avoiding both his mother (who has far more power, and far fewer scruples than is ever good), and her rival Wren, with varying levels of nonsuccess. While Mennik is realizing that he’s stuck between a rock and a hard place, a case drops into his lap that is far above his skill level, and much more complicated than it looks. From there, it’s a non-stop adrenaline rush which somehow manages to also have a complex and incredibly clever mystery involved.

In between traipsing through sewers and attracting the attention of something rather terrifying, Mennik’s character also continues to grow. Through his interactions with his mother, his sister, his thieving friend, Benny, and Benny’s murderous daughter, we are given a more complicated picture of who Mennik is and why he acts the way he does. He never seems to end up on top. The most he can hope for is to break even, and that’s an ambitious goal. Mennik is the sort of character who gets kicked around by life, although in many instances he walks right into trouble. This juxtaposition between the desire to survive and a complete lack of caution leads to all kinds of problems. Mennik’s slightly skewed moral compass shifts continues to intrigue and delight, and his inner dialogue is absolutely brilliant. Author Patrick Samphire takes the smallest of details and makes them fascinating with his incredibly descriptive writing.

The world is gritty and messy, teeming with the equivalent of magical gangsters, meddling gods, and–even worse–politicians. It constantly grows, tantalizing the reader with details and mysteries that have yet to be solved. The dreaded info dump is nowhere to be found, with history and mythology being given naturally throughout the book. While Mennik is juggling multiple disasters, I could see they were puzzle pieces waiting to be fit together. Watching the seemingly disparate parts of Nectar for the God meld into a complete whole is a joy, and the final product is an entertaining romp that will draw you in and captivate you.

Read Nectar for the God by Patrick Samphire