When the cover of Never Die was revealed a few months back, I was instantly hooked. It had a clearly Asian feel to it for which I have a fondness thanks to having read mangas for years to improve my English. Besides, I’m really interested in the Asian culture, especially Japanese, but somehow I hardly read books with a setting like that nowadays. All in all, I couldn’t miss the chance to read Rob J. Hayes‘ newest upcoming release, Never Die. The book is out on 29th January 2019. 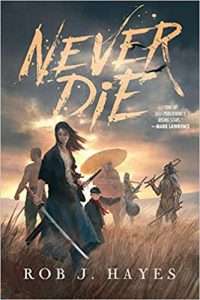 The action starts immediately as we find ourselves right in the middle of an attack on Kaishi as the infamous Flaming Fists tries to get his daughter back, no matter the consequences. The only ones who attempt to get in his way are Itami Cho and her companions, but even they can’t stop the madness. The next day Itami Cho (or Whispering Blade) finds herself alive thanks to Ein, an 8 year old boy. He is tasked by a shinigami (god of death) to kill the Emperor of Ten Kings for which he requires heroes to be bound to him in their death. Cho, not having any other chance, follows Ein, swears an oath to keep him safe and fulfil his quest. They set out to recruit fellow heroes Zhihao Cheng, The Emerald Wind; Chen Lu, Iron Gut; and Bingwei Ma The Master of the Sun Valley. The little group gets complete with Roi Astara, Dead Echo, a leper who joins Ein in the hope the boy can give him back his life once he dies because of the disease he carries.

Never Die’s story moves with a fast pace, and there is hardly a dull moment with the fighting scenes following each other either because the characters are duelling with each other or yokai (evil spirits) who try to prevent them from reaching their destination. We learn a bit of every character’s past and special powers with which they fight—what makes them memorable to the people they saved. All of the monsters or yokai are based on Asian mythological creatures and I would have liked to learn more about them.

Even though I’m sure many people will find this book a highly entertaining read, I found myself struggling with it. It is no question that Rob J. Hayes is an apt writer, who can write flowing fighting scenes without a dull moment, and interesting enough characters—on the outside. Despite Hayes’ ability, I thought the storyline was too simple and in the majority of the book the characters wandered around, duelled with each other, then fought some monster which appeared thanks to the shinigami who was trying to stop Ein and his mission.

The fight scenes were interesting enough but about halfway through I wished there was something else happening too. We learn almost nothing about the culture of Hosa whose emperor they are supposed to kill—for which we don’t really get a valid reason, except that the shinigami wants Ein to do it and that he is supposed to be an evil emperor. All this is told a few times rather than showed and it’s hard to come up with an answer to the question: why should we care about this emperor? Or the supposed heroes for that matter.

They all have their characteristics and personalities and they are distinctive from each other, but maybe because there are quite a few of them, we don’t really get to know them. We get glimpses into their lives and personalities but they remain somehow two-dimensional and not too interesting in the long run. They all have their own motivations and powers, but we don’t really learn about how they aquired them, or how these powers really work. They feel weightless, and their only motivation is the fact that they are bound to Ein. We are told that they are supposed to be heroes, but once again, that’s the problem: Hayes tries a bit too hard to put down on our throat that they are heroes but they don’t really feel like that, except maybe for Itami Cho. Their only purpose is to kill whatever or whoever gets in their way without really questioning why things happen the way they do.

There are some twists at the end of the book, one of them becomes quite obvious about 75% in, and another one isn’t as surprising either if one pays enough attention to the little hints placed in the story. Despite these flaws Never Die, which has a Mortal Kombat-like feeling to it, will be well liked by fantasy readers. It’s fast-paced, features unique monsters and tells the tale of a band of heroes on their way to glory and vengeance. Never Die is a story about gaining a second chance at life for the price of death.