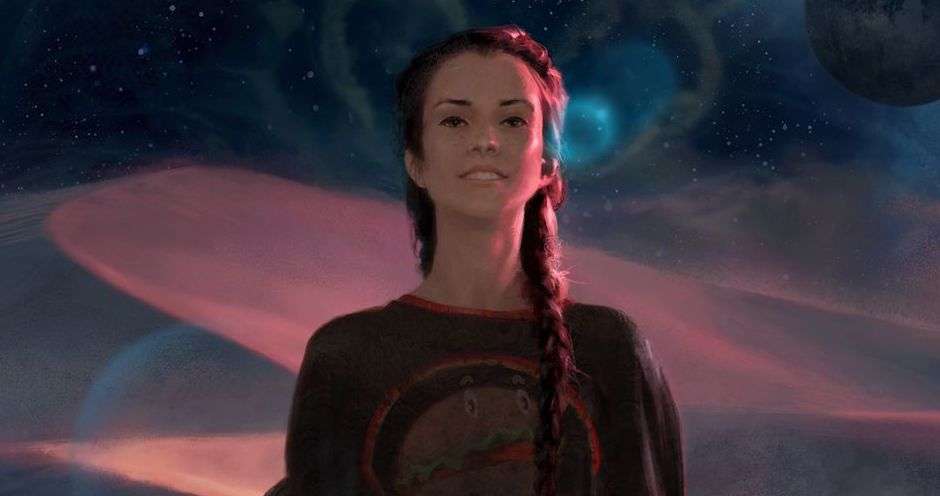 Book three in Tamsyn Muir’s brilliantly strange The Locked Tomb series was originally supposed to be Alecto the Ninth but somewhere along the way plans changed, the trilogy became a series, and Nona the Ninth came into being – another mind-bending but deeply compelling tale of necromancers, cavaliers, the Nine Houses…and a sweet-natured girl with golden eyes. Set six months after the events of Harrow the Ninth, it sees Muir double down on what now feels like her standard practice of confounding expectations and delivering something nobody expected. In this case that means Nona, who may only be six months old but inhabits a nineteen year-old body that probably doesn’t belong to her, living in a war-torn city with three people who share two bodies, and working as a Teacher’s Aide in a school full of strangely-named children (and Noodle the dog). Got all of that? 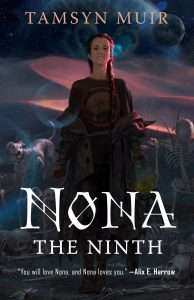 As you might expect, this isn’t a straightforward, easy book. It starts off pretty slow, contrasting Nona’s point of view with strange, revelatory dream segments, and it quickly becomes clear that while this definitely feels like a natural continuation of the series, it very much has its own tone. Nona’s voice is utterly different to Gideon’s or Harrow’s – she’s wonderfully sweet and innocent, but also strangely intense, which is unsurprising given that she’s essentially a child living in a borrowed body, who’s grown (and is in fact still growing) up in a warzone, remarkably comfortable with the violence and poverty all around her. There are, of course, rather uncomfortable parallels to be drawn with the real world in this respect, and as the book progresses it explores the history of the Locked Tomb setting in a way that links it to reality in an unexpected, but very effective fashion.

While Nona is quietly content with her life, her companions – Camilla, Palamedes and Pyrrha (it all makes sense … eventually, I promise) – have a different view of things. As the book is written from Nona’s perspective, we as readers only get to see what Nona sees, all of which is filtered through her strange level of knowledge and understanding. Muir takes her time letting details trickle through and along the way raises a lot of questions – what these characters are actually doing, where other important characters from previous books are at this point in the narrative, what that big blue light in the sky is, why Noodle (the dog) has six legs, and – most importantly – what the hell is actually going on. Much like Harrow, while not every question gets an obvious answer, it does all come together in time.

You might consider this something of a setup book, laying the groundwork for the dramatic series finale still to come, but that would be unkind to Nona the Ninth and would ignore the depth and context that Nona’s story offers to the setting and the ongoing narrative. It expands the scope of the series in a way we haven’t seen before, not only giving us a new perspective into the world, but offering an unexpected origin story of sorts – on the Nine Houses, on the Lyctors, on God/John Gaius, and more –  and providing a fair few “wait, what?!” moments that are bound to provide considerable talking points for fans. Crucially, Muir finds an effective balance between helping readers understand what’s going on and allowing the story to retain a degree of mystique.

What Nona the Ninth won’t do is change anyone’s mind on the series as a whole; readers who struggled with Harrow, for example, may not find this much easier, and Muir is unapologetic in her determination to tell this story in her own fashion. It is, in its own way, a strange and confusing book which demands trust from the reader, requiring the reader to process a lot of new names and take a lot on faith, with very little in the way of obvious narrative signposting.

Those who have loved both Gideon and Harrow will likely find a lot to enjoy in Nona though, from Nona’s weird but brilliantly drawn friends to some intriguing observations on identity, purpose, loss and sadness. Almost every character here has lost something or someone, and the different ways in which they deal with that provide a powerful emotional kick to the story alongside the eventual implications of its twisty, unexpected plot. Nona the Ninth may not be what you expected, but it might just be what you need. Just … make sure you’re really clear on what’s happened so far in the series (a re-read of the first two books is well worth it), and don’t expect any easy answers!

Huge thanks to Tordotcom and Tamsyn Muir for sending me an advance copy of Nona the Ninth in exchange for my honest opinions.</i