Not Saying Goodbye is the last of the Erast Fandorin books by Boris Akunin. It must operate thus both as a farewell and a fitting capstone for a long running series (the first book, was published in Russia as Azazel in 1998; it appeared in translation as The Winter Queen in 2003). Not Saying Goodbye was published in 2018 and translated into English by Andrew Bromfield for Weidenfeld & Nicholson in 2019. 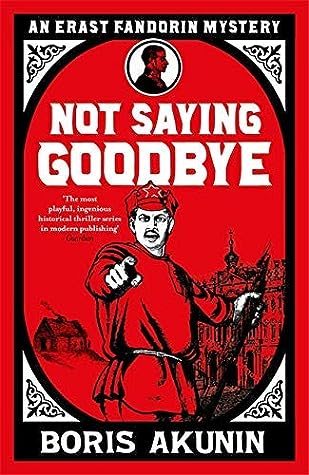 Despite a dangerous career as variously a police detective, counterintelligence agent and private investigator, Erast Fandorin has lived to the age of sixty-two. However, he has spent the last few years in a coma. It is now the year 1918 in Russia, and the Revolution has begun. Fandorin, apart from preserving his own life and safety – which is no mean feat when so many of his resources, physical or otherwise are depleted – must negotiate his way across a Russia that no longer has much use for a principled polymath detective.

The structure of Not Saying Goodbye tracks through the various factions of Revolutionary and Civil War-era Russia, each portion of the novel being named after one ‘truth’ or another: truths Red, White, Green and Black. There is a literal journey from Moscow to the Crimea through a splintered Russia, but though one might imagine that this could become didactic (every chapter, a new revolutionary faction!) it never seems so.

Part of Akunin’s success in this regard is that he does not discard Fandorin, but allows him to drift out of focus, allowing for other, younger characters to take up the role he might have taken on – or to reflect on him as a member of a previous generation. Fandorin’s milieu has always been as a creature of Tsarist, pre-Revolutionary Russia – whatever his travels or the events of Not Saying Goodbye, I am certain that this is how he will be recalled. Therefore, allowing for Alexei Parisovitch Romanov (who appears in some of Akunin’s other works) to take on a number of the more action-heavy portions of the book is beneficial. Romanov, the ironically named Bolshevik officer is an implicit successor to Fandorin, who is examining the possibilities of retirement in the face of old age and a Russia whose problems are beyond his capabilities. The more reflective, character-driven portions of Not Saying Goodbye are driven by an encounter with the passionate sculptor Elizaveta Anatolieva Turusova, known as Mona.

This is a historical novel, and one that throws out references to political factions and geography with the expectation that you have some faint familiarity with them. As with the other Erast Fandorin novels, a passing familiarity with Russian literature and customs will be useful to the reader, though one becomes used to the patronymics rapidly enough.

I was, at root, satisfied by Not Saying Goodbye. It is something of a departure from other novels, but that is exactly what one would expect from the subject matter. Erast Fandorin’s response to and exit from a changed Russia is well-staged and satisfying. As a long-time reader of these, I might give it Four Stars, though for the complete newcomer Three Stars might be more apt.