REVIEW: Of Honey and Wildfires by Sarah Chorn

Of Honey and Wildfires is a novel by Sarah Chorn (The Bookworm Blues website, Seraphina’s Lament). I was a huge fan of Seraphina’s Lament and enjoy her reviews, so this was an anticipated read. However, I was really surprised by the quality of the work and recommend this tremendously. Indeed, I will go so far as to say this is my book of the year. Is it grimdark? I don’t know but it is dark, mature, and deals with a lot of themes that are relevant even today. 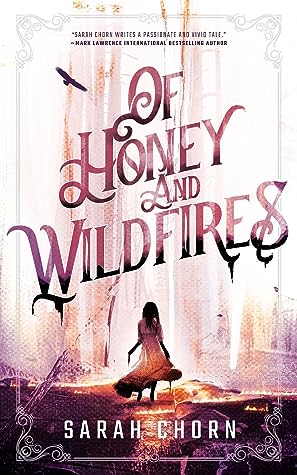 The premise is there is a region to the West where a substance called Shine can be mined. A powerful liquid substance, it can preserve rotting food and provide immense pleasure to people. It can also be used as a power source. For all intents and purposes, it’s magic, and the value of it to society is nearly incalculable. Well, not quite, the Shine Mining Company calculates every drop of Shine and its value at any given time. Any Shine mined by sources other than the company are destroyed by local law enforcement, sometimes killing whole families.

The protagonists are Cassandra and Arlen. Cassandra is the wild woman daughter of an infamous outlaw hated throughout the region for sabotaging the mines and killing a hundred workers. Arlen is the son of the Shine Mining Company’s owner and sent to become the region’s governor. Both of them will have immense difficulty fitting in due to the sins of their respective fathers.

I really enjoyed the feel of this novel that managed to successfully invoke the corporate-controlled coal mining towns that are part of my area’s regional history. The kind of atrocities done by the companies and their thugs is underdramatized and the book managed to successfully replicate that. The book also is LGBT friendly with both Cassandra and Arlen fitting on the spectrum. I was pleasantly surprised by this and it made the book feel richer.

Much of the book is about the relationships between power, wealth, legacy, and family. This isn’t a book about saving the world but the issues that capitalism and unchecked greed have brought to an impoverished area. Arlen is repulsed by the use of child labor in the area but families are literally starving that the only way they survive is by putting their youngest in dangerous situations. This is a world that is crap from top to bottom but in a very believable way.

Fans of action won’t find much of it here and this is more of a character study that deals with how the lives of each character is affected by the twin burdens of both obligation as well as need. I’d argue it’s a steampunk novel because while Shine power replaces steam, it’s the same story about how much as well as technology are intermixed to tell stories in the pseudo-19th century.

In conclusion, I very much enjoyed Of Honey and Wildfires and strongly recommend it. It’s a fairly short read but a really solid one from beginning to end. I finished it in a single day and still come back to think of its plots weeks later.

Read Of Honey and Wildfires by Sarah Chorn