Warren Ellis is a writer that asks profound questions, and that is no different in his graphic novel Orbiter. In his acclaimed series, Transmetropolitan, he talked about the role of the media and investigative reporting. In Freakangels he talks about absolute power and in Trees he writes a story about the science fiction trope of a supergod. A supergod is a being so powerful, so complete, that humanity is but a speck of dust to them. The most clever part about all this excellent writing throughout his catalog is that Ellis tells his tales in the guise of well written graphic novel stories. His books are both deep and thoughtful and exciting but also beautiful. Orbiter is no different. It might even be Ellis’s best story thus far. 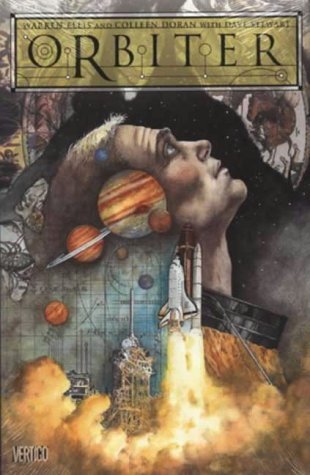 Ten years ago, Venture, a U.S. space shuttle, soared for the heavens but lasted in space only a few minutes and promptly disappeared. It left without a trace. This broke the U.S. space agency and the hearts and minds of would-be explorers the world over. Now, at present, Kennedy Space Center is a shantytown. The reader does not ever know the specifics of what happened to Venture, and why the U.S. is in such decline, so much so that people are starving and living in lean-tos. But, I could guess it has to do with the demise of NASA and of hope for the future in general. Space travel and the hope for more can be a buoying thing to society. It is the ultimate what-if. Without that, life can become long and sad and there is nothing to strive for. After a few pages describing what a shit hole life has become, the Venture comes wailing like a ball of hellfire through the air and slams into the ground liquidizing a few unfortunate souls that were in the wrong place at the wrong time.

The big question is why Venture is back. But the more significant and more interesting question is, “where has the Venture gone?”

The military step in as they are want to do. “Is the Venture a threat to the U.S.?” A military commander, Colonel Bukovic of U.S. Space Command, gathers a team of scientists to investigate. The best and brightest the U.S. has to offer have been languishing in poverty and boredom due to NASA no longer existing. Bukovic, an angry military commander trope, needs the answers yesterday on what is going on with this ship. It looks like it hasn’t aged a day, it should have run out of gas years ago, and where is the crew?

We jump from an overall exposition of the state of the U.S. to a much more intimate look at the scientists as characters. Michelle Robeson, once a prominent biologist, is now trapped on the Earth and has lost her greatest love.

“been trapped on this planet since Venture disappeared. It radiates from her. This palpable feeling of something having been stolen from her.“

Terry Marx is a young and violently brilliant engineer. He comes off at first as a little hamfisted. Wrong with girls and awkward in conversation and personality. As the story is propelled forward, he, as a character, gets a lot more solid and interesting. The great mystery of it all is what drives him. He never got the opportunity to use his intelligence to reach out to the stars, that was taken from him when NASA was closed. Now with Venture back, he can flex the mind muscles that have laid dormant for so long. The final main character is Anna Bracken. Anna was a psychologist whose primary purpose was to help and study those astronauts who have returned from space flight. “To help make sense of it all.” She knows that she will never go to space, but she can experience the sense of wonder and thrill vicariously through helping ones who had. When NASA was shuttered, she lost her chance of hope and wonder. It was taken from her as it was taken from all citizens when NASA closed. Each of the three main characters represents a viewpoint. Michelle lost her ability to experience the greatness of space, and she will always yearn for it. Terry lost his chance to dive deeper, to peel back the layers of science to find what was underneath, and Anna lost her opportunity to live vicariously.

We, as a society, lost so much when NASA closed.

Now the Venture is back and full of questions.

Ellis tackles something fundamental in Orbiter, and it is this, “if you take away the greatest thing a human can yearn for, an impossible thing, what is left? How do we go on?” Space flight is, synonymous with dreaming for a lot of people. If we shutter space flight, do we take away people’s ability to dream big? Maybe. It certainly helps to know that great things are happening. Orbiter is a science fiction story that asks the essential questions, “who are we?” And, “can we be more?” Inside of the more profound questions, Ellis writes a good character study on the three types of people as well coupled with gorgeous graphics. Layers inside of layers

It is a beautiful and deep science fiction that should be read and often.