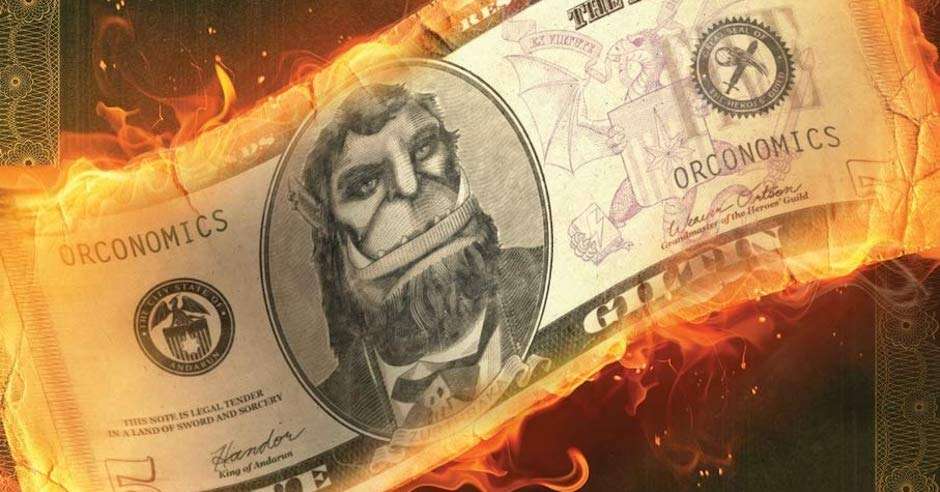 J. Zachary Pike’s Orconomics on the surface, looks like your typical fantasy story. Not bad, but nothing to write home about. The thing is five pages into the book; you know that you are entirely wrong. There is nothing standard about this exciting, hilarious story told from the multiple points of view of the “heroes.” But at its heart, Orconomics is a scathing and effective satire. It is capitalism and the dangers of, set in a magical world. 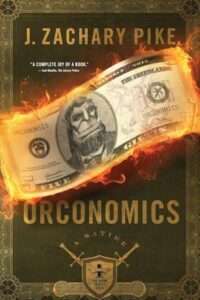 I did not see that coming.

The plot of the story, as mentioned before, is about a group of reluctant heroes. They are gathered together to go on a quest looking for treasure and finding lost relics. There are quite a few different political and economic plays by various groups around this quest. Things are not what they seem. At times the plot was a bit hard to follow, but as the story reaches its conclusions, everything becomes clear.

“Ye must be Angusss,” said Gorm, stamping up to the bar. “Anguss,” corrected the serpentine barkeep, polishing a glass. “The middle ‘s’ is silent.”

The questing party, professional heroes down on their luck, are being supported by a local religious community and a cadre of investors who invest in quests in exchange for a portion of the loot. This usually comes from non papered characters or shadowkin that are seen as fodder and regularly killed and hunted to increase hero rankings. Their only mistake is that they are a nuisance to humans and possibly have pillagable loot. The higher ranking the hero is, the better the quests. It sounds like a very familiar scenario, that of Hollywood movies. Movies get made with a well-known actor; interested parties then fund the film in exchange for a portion of the generated revenue. The actor and their following is a commoditized asset that rises and falls based on the actor’s successes and failures. Orconomics is more cutthroat in the successes and failures, literally, but the economic system is the same.

This book’s satire takes on some pretty hard-hitting ideas. Firstly, we have the whole questing system. It treats the heroes as commodities bought and sold, as I said earlier—a very Hollywood idea. Orconomics also touches on the toll of drug addiction, specifically opioid or pain killer addiction, which is rampant in cities across the world. One of the main characters, who once was a huge and well-known adventurer, had too many injuries requiring healing potions. Eventually, the healing potions become what she lived for, and addiction occurred. She then became a shell of her former self, always looking for a reason to get high. The author addresses this in a scene talking about people out on the street, cutting themselves so that they need to use a healing potion.

“Marketing is its own kind of magic, is it not?” said Zurthraka. “An illusion that men pay to be fooled by.”

Pike also touches on class system dynamics; market commoditized objects such as magic swords, religious zealotry, and the business of making money from it, and lax laws for weapon ownership. A stand-in for lax laws around gun ownership. You will read this thinking that Pike is brilliant as hell, and be a little sad that our world is so near in line with the one in Orconomics.

Firstly, the main character is a dwarf named Gorm Ingerson. Much of the story is told from his perspective. He is a tenth level hero, who, twenty years ago, “supposedly” made the mistake of running to save himself when most of his party perished. He was left shammed while another party member who stayed to fight became one of the land’s best-known heroes. The rest of the hero party is full of misfits. They all have a reason to be there and are hoping for another shot. This leads to a sense of urgency in the questing; they all need to succeed in this quest.

Because each party member has a distinct voice written well by Pike, the dynamics of interpersonal relationships between the questers and character development truly come through. We are told very early what each of the characters are facing and working with. One is a drug addict who is addicted to healing potions and alcohol. Gorm, as I mentioned earlier, is fighting his past. Another is a very skilled mage that is not useful in a fight. At the same time, the other mage is an excellent brawler but has no finely honed skills. Another is a shadowkin just trying to survive. The shadowkin’s, a goblin, and his relationship with Gorm are the book’s best parts. Best and certainly funniest. I laughed for a good two minutes after reading how Gorm found out how to say the goblin’s name. Finally, we have one who rarely speaks, and another running from a mobster—all work to play off each other and develop as characters.

“I prefer to quit while I’m ahead,” Heraldin explained. “Ye’ve a funny definition of ‘ahead,’” said Gorm. “I prefer to define words in ways that suit me,” said Heraldin.”

Man, this is a great book. And, five minutes into reading it, I understood all the love for it. It was the SPFBO4 winner, and now I can see why. The relationships, the story, and the allegory to everyday economics are so cleverly done that they might go under people’s radar. I didn’t figure out half of them until I sat down to write this review. It all started to come together, and I realized how creative Pike is. The book was funny, and heartfelt which, in the face of some pretty hard plot ideas, is important and kept the tone light. Had he not done that, this book might be too depressing to read. But, as it stands, it is a perfect balance. I am a fan of this book, obviously, and will be jumping into the next book, Son of a Liche, as soon as possible.

It is a worth it read, so check it out.