REVIEW: Papa Lucy and The Boneman by Jason Fischer 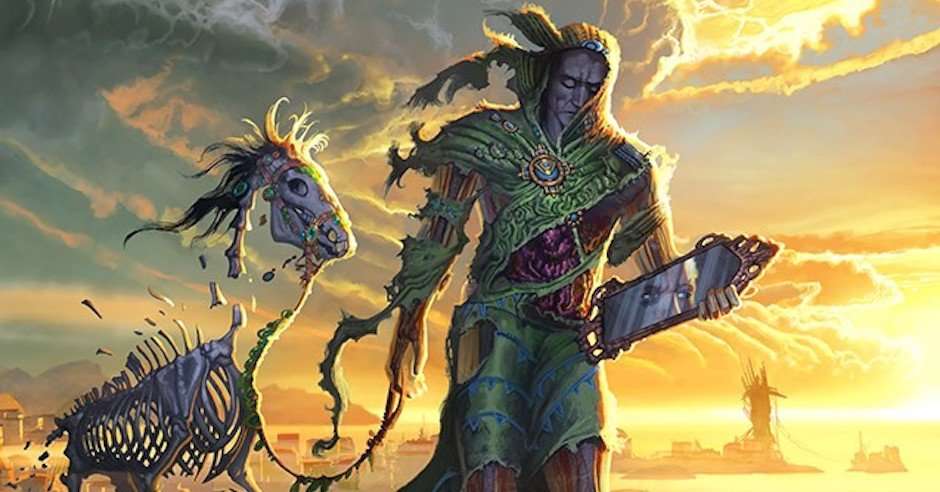 Papa Lucy and The Boneman by Jason Fischer is a novel built on grunge and violence. He depicts a multi-dimensional world equally nightmarish as it is wondrous. His characters wretched, but fanatical. If you are searching for true grimdark, this book is it. 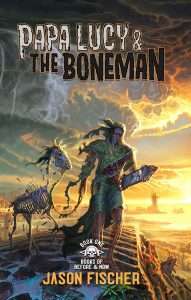 Papa Lucy and The Boneman begins with a naked man emerging from within a mountainous shrine of bones. After centuries of rebuilding a new body, the Boneman has awoken. He is a sorcerer and death belonged to him. He is a necromancer. A god. His last memories were those of war, the one he fought with his brother, Papa Lucy. Papa Lucy was once the savior of mankind, having led them through the Greygulf, a path between worlds and time, and into the new world called Now. But Now is a brutal and apocalyptic world. Something went horribly wrong while the Boneman slept. The Boneman must find his brother.

Papa Lucy and The Boneman follows the narratives of not only Gods, but also a few mortals. Lanyard Everett is the last of the Jesusmen. Once a noble calling, Jesusmen are now all outlaws. Lanyard’s ruthlessness apparent even amongst the most vile and deplorable of people. Jenny Rider is the Selector’s daughter, chosen by Papa Lucy to carry out his bidding. She carries the Cruik, a weapon powerful enough to terrify gods. It protects her vigilantly as much as it changes her. We’re also given the perspective from a few others. Jason Fischer is liberal with character perspectives. While at times, I wanted this a bit more selective, it never feels overwhelming. Each person brings their own uniquely demented point of view.

A big reason why I love Grimdark is for its crazy and wicked settings. Papa Lucy and The Boneman is the epitome of what I look for. I was thoroughly captivated by the world Jason Fischer created. He meshes grim fantasy with modern-ish technology. While surviving the Now is bleak, there is a boundary few are mad enough to travel into, the Waste. It is a land where the veil between dimensions is thin, where insanity is birthed. The Waste in Papa Lucy and The Boneman is reminiscent of the Misery in Blackwing.

Papa Lucy and The Boneman is a feast for the imagination. It includes horrifying imagery, bone-chilling magics, and grotesque creatures. It is a world I did not want to leave. I am all too eager for book two.

Read Papa Lucy and The Boneman by Jason Fischer