Persephone Station is the upcoming science fiction novel by multi-award-nominated sci-fi and fantasy author Stina Leicht (The Fay and the Fallen, The Malorum Gates). The novel tells the story of a band of mercenaries hired by a friend to a protect an indigenous village from the greedy interplanetary Serrao-Orlov Corporation. Serrao-Orlov has just purchased the planet Persephone on the outskirts of the United Republic of Worlds and seeks to profit from a secret scientific development that could change human life forever with dire consequences for everyone except the richest humans. But the secret is known only to the indigenes, the Emissaries in Ogenth, Persephone’s perilous frontier. Serrao-Orlov will destroy everything to exploit this secret. Angel and her band of misfit mercenaries must stop them. 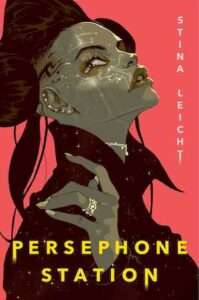 Angel’s friend Rosie is the owner of Monk’s Bar, a seedy hangout for mercenaries and other lowlifes in the corporate-run town of West Brynner on Persephone. Rosie has a special tie to the planet’s indigenous people—they saved her when she was a small child of Catholic missionaries who were trying to convert the indigenous population to their religion. When Rosie finds out that Serrao-Orlov is determined to exploit the Emissaries at any cost, she hires Angel and her band to protect Ogenth. Angel has fallen on hard times since her career as a space marine ended. And because she has just been framed for the assassination of a powerful corporate leader and needs to get out of town quick, she gathers her team of assassins and oddballs and heads out to Ogenth in her spaceship, Kurosawa.

Like many excellent novels, and like Stephen King recommends in his book On Writing, the fight to save Ogenth from Serrao-Orlov is smashed together with another main plot—the emergence of artificial intelligence in human bodies. Artificial intelligence of at least two kinds is already widely employed in the United Republic of World, including in the spaceship Kurosawa and in Angel’s combat assistant, a function of her battle suit that enhances her ability to produce adrenaline and whatnot. But transferring artificial intelligence to humans could present extraordinary challenges to human life. After she is framed for the assassination, Angel runs into mysterious off-world stranger, Kennedy Liu, who just might hold the key to stopping the proliferation of this dangerous technology. Ultimately, the two plots converge on Persephone Station, a floating space station above the planet.

Persephone Station has everything a grimdark fan could want in a science fiction novel. The characters are outcasts, heavily armed and highly flawed. They face a powerful force on a suicide mission against all odds. Though the main characters are undoubtedly on the side of good in this novel, they are assassins and mercenaries who take the job for the money and for their friend. They fight with spaceships and mech suits and rail guns and pulse rifles and bombs and all kinds of good stuff. People get injured and killed. The settings are grim and perilous. The action is tense and fast, extremely interesting, logical, and vivid.

The one thing Persephone Station doesn’t have, though, is men. Similar to Kameron Hurley’s fantastic Bel Dame Apocrypha trilogy, all the main characters in Persephone Station are women, and the novel is billed as feminist science fiction. Hold on, dudes, don’t go anywhere. For me, an old man (and a feminist—women should be treated as equals), this did not lessen my enjoyment of the novel at all. These women kick ass. And unlike Hurley’s excellent novels in which there is a clear reason why there are no men around—they are conscripted to battle for life essentially—there is no such clear explanation here. These are just some tough assassins and mercs. Angel is an ex-marine who has purchased Kurosawa with money she made as a merc. Her would-be lover best friend, Sukyi, is from Earth, Nigeria specifically, which has fallen victim to a plague that Sukyi carries around with her, knowing she does not have long to live. She likes to blow things up. Lou is the adrenalin-addicted pilot of the Kurosawa. She cannot get enough of the fight, and surprisingly, she has a boyfriend. Enid is a dry, taciturn, top-notch assassin. All these characters have secrets that will out, and Leicht handles them and their relationships beautifully, creating an emotionally gripping backdrop to the furiously fast-paced adventure.

Persephone Station is a bit of mashup of grimdark fighting fiction, space opera, and cyberpunk. It has just enough science to bring it to life without distracting from the characters and their relationships and is loaded with many interesting subplots that come together to create a very entertaining story with depth and complexity even if it is not mind-blowingly original. Leicht’s prose is crystal clear and unpretentious. And although the pace of the novel is almost recklessly fast, the book is long enough at 512 pages to be truly immersive. Fans of gritty, grimdark space opera and science fiction should enjoy it. Fans of female-centred (feminist, if you insist) SFF should definitely give it a read. Though there are many, many more female protagonists and antagonists in SFF now (as you can see from Grimdark Magazine’s top fantasy novels of 2019 list) than there were when I started reading the genre, it is still male-dominated, especially on the sci-fi side. Give this one a go for a fun read.

Persephone Station is scheduled to be released by Saga Press on 5 January 2021.