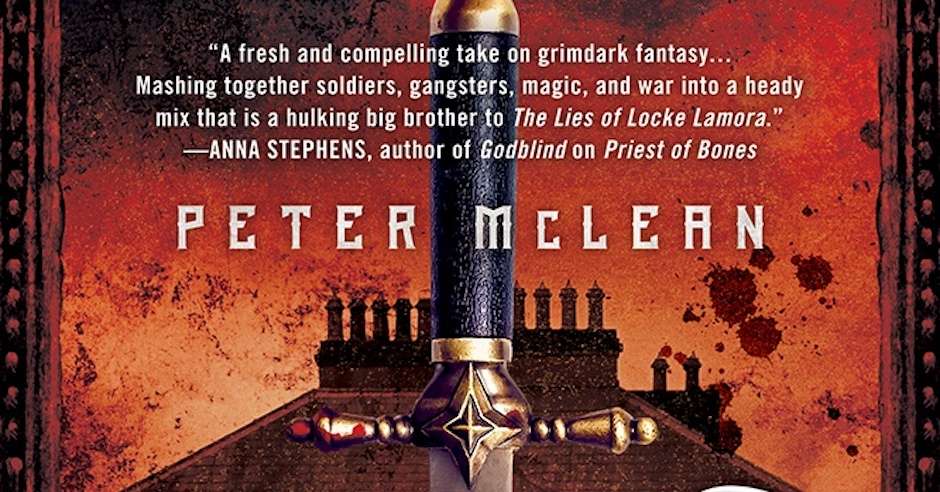 I received an uncorrected proof copy of Priest of Lies in exchange for an honest review. I would like to thank Peter McLean and Ace Books for the opportunity.

We return to Ellinburg following the first person perspective of gangster boss Thomas Piety, the head of the Pious Men. The way that McLean writes led me to feel like I was actually walking the streets of The Stink, enjoying a mug of beer in the Tanner’s Arms and that I was almost a member of the Pious Men myself. When a fantasy world has me that invested then it is difficult for an author to do much wrong. Since I read Priest of Bones I have read about 100 books so I always worry when returning to a fictional world after I’ve spent too much time away. Will I remember the characters? Political agendas? Warring factions? Etc… With Priest of Lies, I need not have worried. The reading experience at the beginning was like trying on a favourite hat that I thought I’d lost to find out that it still fitted perfectly and I still looked good in it! I fitted in with the world here again straight away and it was a great feeling.

In addition to the quality worldbuilding, which is set across two cities this time, War for the Rose Throne’s greatest asset is the characters. They are a colourful bunch featuring many different characteristics and personalities, but they gel in sublime fashion under the guidance of Tomas, that they are a family. My favourites remain Tomas himself, his second Bloody Anne, and the young magician Billy the Boy – who is Tomas’ adopted son. Some of the ensemble who were featured heavily in the first novel get less page time here but other players have real standout performances. Jochan, Tomas’ slightly deranged half brother really shines as does the role Cutter – the mysterious and perhaps even nefarious assassin – plays. A revelation regarding the latter literally made my jaw drop! To say it’s a group composed of war veterans and hard as nails mercenaries, I don’t think there is a single member of the crew that I didn’t like reading about.

Either I’ve become softer in my old age or McLean has really upped the Grimdark stakes here when compared to Priest of Bones! Deaths of likable characters. Yes. People being eaten alive by a bear? Of course. Betrayals, sedition, turpitude? Sure. And a scene featuring a grotesque ritual that showcases what happens if you betray the Pious Men from the inside. Peter McLean sees your hammer scene Anna Stephens and he raises you this!

Priest of Lies is written in a style that caused me to devour the entire novel within two days. The chapters are short and sharp each taking about ten minutes to read. Each chapter is focused, precise and keeps the plot moving and flowing expertly. Even though the narrative is quite short by fantasy standards with 368 pages the dramatis personae is overflowing with characters however none of them seemed two-dimensional filler. I even cared about more obscure individuals such as Tomas’ barber which reflects the way he truly cares for those that are under his protection. If you cross his people you cross Tomas and the consequences to that can be drastic and I don’t really fancy being buried alive.

Priest of Lies is pretty damn exceptional. The ending is stunning and I can’t wait to see what comes next. I need to see Kurt’s sword again! Both the books in this series are 9/10 standard. This is the third book I have read by McLean and I have never been disappointed at all. The only negative I have here, and it’s very minor, is that Tomas says ‘as I have written’ far too many times and it niggled me a bit. Priest of Lies is stunning low fantasy by an author who is on top of his game. Start this series if you haven’t already.

[…] Peter McLean – Priest of Lies I said: “Priest of Lies is stunning low fantasy by an author who is on top of his game.” (Full Review) […]