Every magnet has two poles, north and south, which can never be separated. The power of the magnet—indeed, the very concept of a magnet itself—necessitates a pairing of these two opposite but complementary poles. In Prince of Fools, author Mark Lawrence has personified this concept of inseparable magnetic poles with Jalan Kendeth, the fun-loving playboy prince from the southern part of the Broken Empire, and Snorri ver Snagason, the serious and honest Viking from the north. 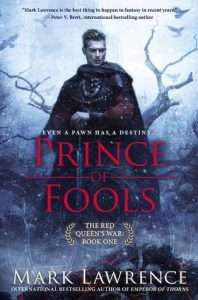 Prince Jalan is a self-admitted coward, liar, and cheat. He wants to live the good life of a royal who is tenth in line to the crown, full of wine, women, and gambling. Responsibility is overrated.

But fate deals Jalan a different hand when he meets Snorri, a hulking Norseman who has been captured and sold into slavery. Jalan and Snorri become bound together through a magic spell cast by the Silent Sister, the mysterious sibling of the Red Queen, Jalan’s grandmother, whom only Jalan and Snorri are able to see.

Jalan and Snorri set off together to the icy lands of the North on a quest that neither of them fully understands. As part of the Silent Sister’s spell, one becomes dark-sworn and the other light-sworn, two complementary forces representing the yin and yang of their relationship. Although the forces of dark and light appear as opposites, they are actually interdependent, a lesson that Jalan will need to learn throughout his journey with Snorri.

Prince of Fools is the first volume of the Red Queen’s War trilogy, which takes place in the same neo-feudal, post-apocalyptic world as Prince of Thorns and the rest of Mark Lawrence’s Broken Empire series. Utilizing the perspective of Jalan Kendeth, Lawrence has crafted a very different experience in this same dark world.

The tone of Prince of Fools is more lighthearted compared to that of Prince of Thorns, primarily due to having Jalan as narrator. Despite his many shortcomings, Jalan is a good person with a self-deprecating sense of humor. I laughed out loud several times while reading Prince of Fools.

I love the friendship that develops gradually between Jalan and Snorri, a perfect odd couple who play well off each other throughout the trilogy. Snorri always believes the best in Jalan, despite Jalan continually trying to cut himself down.

The intersecting plotlines between Prince of Fools and Prince of Thorns are another highlight. Both novels take place concurrently, and there are several overlapping characters, including the enigmatic Dr. Elias Taproot. I was particularly amused seeing Jalan’s perspective on Jorg Ancrath and his band of Road Brothers from Prince of Thorns, including one of them who is harboring a surprising secret.

Although I am emphasizing the more lighthearted elements of Prince of Fools, this is still grimdark fantasy full of violent action (cue Snorri picking out pieces of lung from his overgrown beard). Jalan Kendeth is a morally gray narrator, but much more immediately likeable than Jorg Ancrath in Prince of Thorns.

Which trilogy should be read first? There is no wrong answer to this question, since the Broken Empire and Red Queen’s War trilogies can be read in either order and provide complementary perspectives on the same world. If you want to turn the grimdark dial up to eleven, then Prince of Thorns is the better place to start. However, readers who are not yet ready to dive into the pitch-black heart of Jorg Ancrath may find Prince of Fools to be a better entry point to Mark Lawrence’s world of the Broken Empire. Prince of Fools also has a more accessible writing style and linear narrative structure compared to Prince of Thorns, making it an easier read. Overall, the Red Queen’s War trilogy also offers more expansive worldbuilding compared to the Broken Empire trilogy.

Overall, I’ve never had such a good time in a post-apocalyptic world as I did in Mark Lawrence’s Prince of Fools. Lawrence has created a gleefully fun and surprisingly complex main character in Jalan Kendeth, who provides a perfect balance to the dark world in which he inhabits.