A hard-hitting, heartbreaking second novel of The Firemane Saga. In Queen of Storms, Raymond E. Feist takes us on a wild and perilous ride with his characters. 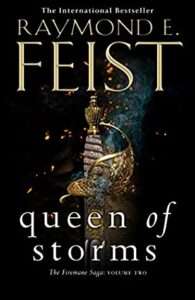 Cover of Queen of Storms by Raymon Feist

I once tried to explain where Raymond E. Feist fit into fantasy as a genre. I was talking to a gamer at the time, and the only comparison I could come up with at the time was that Raymond E. Feist is to fantasy what Final Fantasy is to gaming. Feist has been around a long time. To some, his novels are the bedrock for their love of fantasy books, much like The Final Fantasy series to gamers. To those who read fantasy and have been reading fantasy for decades, Feist is enormous. His Riftwar Cycle is 30+ books long and defines what epic fantasy can be. Not to say that Feist is the end all be all of fantasy. There are many types and flavors of fantasy out there, but if you enjoy high fantasies, he is a must-read.

The Queen of Storms picks up right where we left off in King of Ashes. A lot is going on with the four main characters and tone-wise The Queen of Storms immediately has a darker and more intense tone. The four main characters: Hatu, Hava, Declan, and Donte, are the leading players. We also have the perspective of Baron Dumarch, who will play a pivotal role in the upcoming final book of the trilogy. Although he is crucial, I don’t think he is as important as the other four characters. Hatu, however, is an incredibly important character.

You do not see much personal growth with him personality-wise in Queen of Storms as he is still very much a bratty and slightly slow to pick up on things lead character. He doesn’t engender much sympathy or interest from me as a reader. But one change we do see in Queen of Storms is that his circumstances change quickly and with finality. He finally starts to understand that he has responsibilities that he cannot shrug off. He was living a comfortable and normal life at the beginning of Queen of Storms as an innkeeper. Although he had never run an inn with Gwen, Declan’s future wife, he was getting the hang of it and rebuilding his inn. But we all know that comfort and stability is not in the future of a Sicari trained spy and the missing Firemane child.

Hava, who, along with Declan, has the most exciting narratives in Queen of Storms grows as a character. Or at least she lets out her lethality. There is a desperate and absolutism to her moral values. Whether this is an innate part of her personality or something learned from her years trained as a Sicari trained spy, she will do anything it takes to achieve her goals. You see that in spades on Queen of Storms. Nothing will stop her.

Declan, master smith and would be family man has a lot to contend with in Queen of Storms. The least of which is the loss of his forge. What is a blacksmith if they have no forge? Declan has a strong compartmentalism in his mind and personality. It is the antithesis of Hatu. Where Hatu burns with fire and rage that can consume him entirely, Declan is cold and hard. Much like the iron he forges. As a reader, it is evident that Feist is purposefully putting these two players in the plot who are entirely different but whose lives intertangle with each other. There will come a moment in the next book; I suspect where Declan’s cold fire, and Hatu’s rage will work in tandem.

Last but not certainly least is Donte. His arc in this book is confusing and slightly bewildered. He floats on a collision course with Hatu and Hava like a balloon, he bounces and drifts from one thing to the next. But without and seriousness or steadfastness. He will be an essential character in the next book, for sure. If only because of the thread of his attachment to the witches from the first story. He has the niggling mind worm of an idea planted in his mind from them, and he is seemingly okay with it. Even though it goes against everything, he values. It is strange; I feel like his min