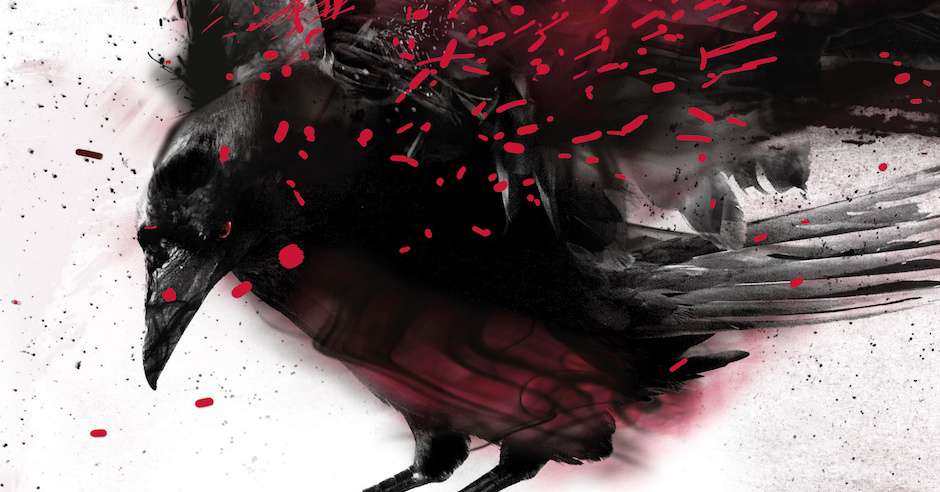 Blackwing was a hell of a lot of grimdark fun, so it’s an understatement to say I was keen to get my hands on Ravencry, the second instalment in the Raven’s Mark series. Ravencry is set four years after the end of Blackwing and continues the story of Captain Ryhalt Galharrow, the hardbitten enforcer of the wizard Crowfoot. 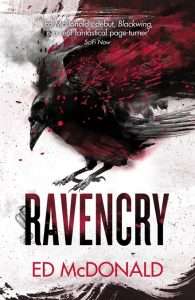 While his cynical turns-of-phrase are true to form, Galharrow’s become more of a mellow creature. No longer does he run amok with Nenn, Tnota and stalwart killers. Instead, he works out of an office with Valiya, his administrative manager, and Amaira, the servant girl who maintains his work space. His steely right-hand woman, Nenn, is still around, but now she’s a ranking soldier in the Valengrad army, although that rank seems fairly variable due to her constant demotions for slugging superiors.

Once the obligatory introductory scene of matchlock flaring, sword swinging violence is over, Ravencry settles into an initially leisurely pace. Galharrow and Nenn have segued into the fringes of respectable society and there is politicking and statecraft to be done. Also, there’s some time spent getting up to speed with his domestic/work situation and his relationships with Valiya and Amira.

However, Galharrow is soon attempting to see off multiple crises: Galharrow’s boss, Crowfoot, loses a ludicrously powerful relic that could turn the tide of the war; a new religious sect starts sowing civil unrest; the Deep Kings activate a new long-range weapon; and a man Galharrow previously killed comes back from the dead to return the favour.

Galharrow juggles political peacemaker with the role of detective as he tries to douse the civil unrest, solve the mysteries of the stolen relic and the resurrected assassin, and manage his burgeoning romantic feelings for Vailya and a fatherly sense of responsibility for Amira. As the story progresses, Galharrow’s lot only gets messier and messier, and it’s only a matter of time before everything dear in his life is at risk.

The religious sect plot line is arguably the most overt and immediate of the storylines. It concerns a new religion that worships a deity called the Bright Lady. The Bright Lady is said to be manifesting in visions around the city, and true believers have taken to wearing yellow hoods as signs of devotion. Galharrow’s not much for religion, especially as he believes the visions are echoes of his beloved Ezabeth Tanza, who died four years ago in a magical cataclysm when she helped save Valengrad. Galharrow’s also got personal history with the nominal head of the faithful, a perfumed and debonair soldier called Thierro. They used to be war buddies, but now Thierro is setting himself up for a collision course with Valengrad’s military establishment, and Galharrow’s looking like getting caught in the middle.

Naturally, Galharrow getting caught in the middle of anything means a fight, and the fight scenes are excellent. Galharrow knows how to use a sword and the authenticity in the swordplay is refreshing. Galharrow himself is also good company on the journey. His black humour keeps his internal dialogue lively. My only quibble is that occasionally his longer and more morose ruminations do detract from the pacing.

While complete in its own right, Ravencry has the feel of a bridge to more momentous (and probably bleaker) times for Galharrow. There’s a strong intimation that we’ll see much more of the Misery in later instalments. This can only be a good thing, as the magically tainted wastelands of the Misery are one of the strong points of the series. Galharrow’s visit to the Misery’s epicentre, the Endless Devoid, is the highlight of Ravencry.

Overall, I’d give Ravencry four stars out of five. It’s a satisfying read, even if it throws a softer punch than Blackwing. Granted, though, it’s still a punch stiff enough to loosen a Misery-dwelling skweam’s pearly whites.