Scott Lynch’s second novel in The Gentlemen Bastards Sequence, Red Seas Under Red Skies, picks up two years after the events at the end of The Lies of Locke Lamora. A new city brings new opportunities and trials, forcing our boys to learn quite a few new tricks. More importantly, they’ll have to rehash some old ones. 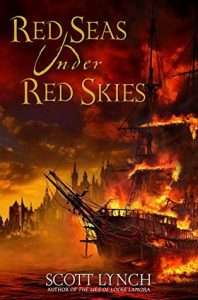 Red Seas Under Red Skies follows Locke and Jean after leaving their home in Camorr. Stuck in a deep spiral of despair, the only thing that can catch Locke’s attention is a challenge, the challenge of challenges: the Sinspire. The Sinspire is an infamous gambling house in the city state of Tal Verarr, revered for its high-class clientele, secrecy, and security. No one has ever stolen anything from the Sinspire and lived to tell the tale, making it the perfect target. There’s just one problem: before Locke and Jean can enact their deliberate and elaborate ruse, someone else requires their assistance of the most fatal kind. Led into a scheme on the high seas, our two favorite thieves will prove exactly how much they know about piracy and ships: absolutely nothing.

Although there is a time lapse between The Lies of Locke Lamora and Red Seas Under Red Skies, Lynch connects key moments from the past and the present, directly tying the books together. His prose continues to be a strength as he frames each story element from the mindset of a con man: every detail matters and creates a vivid image. The other highlight is the relationship dynamic between Locke and Jean. Where the first book set the foundation of the strong friendship between the two, the sequel shows the highs and lows that come with any meaningful relationship, especially during conflict. The level of effort Lynch puts into their bond invokes a strong sense of investment and care from the reader.

At over 600 pages, some readers might take issue with the pacing. This slow buildup combined with a large focus on a seemingly small plot point could form the mindset that Red Seas Under Red Skies is a jolly side quest. However, Lynch uses his unique affinity for master plotting to weave even the most miniscule of threads together, playing the reader just as Locke would a gullible mark. Everything comes together in the end. If anything, I wish there had been more pages to read when I finished.

From a grimdark perspective, Lynch uses his classic subtlety in Red Seas Under Red Skies. He lures you in with descriptions of food and stunning buildings before changing up the tempo with a quiet onslaught of brutality and truth: “The truth of anything we do will die with us and nobody else will ever have a bloody clue” (83). At surface level, this is not your typical blood and violence manifesto, but once you delve deeper, the book’s heart is just as black as other works found under the label, albeit shaped differently. I’m ready to see what awaits Locke next in The Republic of Thieves.