Red Sister is a classic of modern fantasy, a perfectly crafted and beautifully written opening to Mark Lawrence’s Book of the Ancestor trilogy, which centers on a cast of young novices training to become skilled warriors, spies, alchemists, and mystics under the tutelage of Abbess Glass and the sisters of Sweet Mercy Convent. 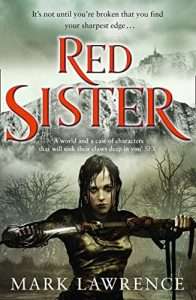 It all begins with a young peasant girl, Nona Grey, an outcast from her small village in the brutal ice-covered world of Abeth. Only a slim corridor of green encircles the planet, kept alive by a mechanical moon that focuses light from a dying sun. The moon was created by the Missing, the original settlers of Abeth who possessed technology now lost to the current population. But traces of the four original tribes remain in their blood, giving heightened powers to a select few. Nona is one of the very rare individuals exhibiting traits from more than one of these original tribes.

The four tribes, in order of decreasing prevalence, are: (1) gerant, who grow to an abnormally large size; (2) hunska, who can move and react with fantastic speed; (3) marjal, who have access to the lesser magics, including shadow-work and mastery of the elements; and (4) quantal, who can access an alternate layer of existence known as the Path, enabling them to manipulate the threads of reality itself and form entangled bonds with the minds and bodies of other quantals. Children who exhibit traits of the original tribes are often captured and sold into fight-halls. The lucky ones find their way to Sweet Mercy Convent, where they can be trained to control and develop their powers.

The worldbuilding in Red Sister is outstanding, with careful consideration for all factors related to the geography, technology, religion, politics, and culture on a planet where only a small strip of land is inhabitable. Whoever controls the mechanical moon also has the fate of the entire world in their hands.

Best of all are the characters. Red Sister introduces us to Mark Lawrence’s most compelling cast of characters from any of his series. Nona Grey is an ideal main character, struggling with the dark realities of her past and her seemingly uncontrollable violent powers. But at her core, Nona is a very kind and caring person who values honesty and friendship above all. The other novices—Ara, Zole, Clera, Hessa, Juli, et al.—are all wonderfully developed characters, as are the sisters of Sweet Mercy.

Mark Lawrence’s writing is concise but packed with details and emotional value, without ever wasting space on filler. There are so many quotable lines throughout Red Sister, including its iconic opening: “It is important, when killing a nun, to ensure that you bring an army of sufficient size.”

I especially appreciate Mark Lawrence’s attention to detail and the way he gradually reveals the truth about certain characters. Nona’s violent and heart-wrenching past is revealed after several misdirections, including her interactions with the peripatetic juggler, Amondo, and the way she saves her friend, Saida, from the brutal gerant Raymel Tacsis. We also learn about Clera’s true backstory as the copper penny she flips gradually changes to silver and then to gold over the course of the book. I also love how Mark Lawrence plays with classic fantasy tropes, such as the magic school and the notion of a Chosen One.

I really can’t recommend this series enough. With the Book of the Ancestor, Mark Lawrence has crafted the perfect fantasy trilogy, and I don’t give that praise lightly. I’ve read the series several times, and it keeps getting better each time through. Upon my first read of Red Sister, I already fell in love with the wonderful cast of characters and was blown away by the story itself. However, each time through, new layers emerged with subtle foreshadowing of future volumes in the Book of the Ancestor trilogy and Mark Lawrence’s subsequent series, the Book of the Ice.

Clever connections to Lawrence’s other trilogies also gradually reveal themselves upon careful reading. For example, those with gerant blood share a name with the abnormally large knight Sir Gerrant, who is mentioned briefly in both Prince of Thorns and Prince of Fools. In fact, the characteristics of each of the four tribes in Red Sister are connected to Mark Lawrence’s broader worldbuilding across his five trilogies, but only hinted at throughout the Book of the Ancestor.

I would advise readers who finish Red Sister to read Mark Lawrence’s excellent short story, “The Devil You Know,” before continuing to Grey Sister. You can think of “The Devil You Know” as a few extra chapters tacked onto the end of Red Sister, describing the aftermath of the final scene from that book and providing an important bridge to Grey Sister. Astute readers will also find subtle connections among all of Mark Lawrence’s trilogies buried in this short story.

Five enthusiastic stars to Mark Lawrence for Red Sister, one of his finest achievements. If you haven’t already started Book of the Ancestor, pick up a copy of Red Sister today, and Nona Grey will become your friend for life.