Rogue Trooper began life in the British comic 2000AD in the early 1980s, initially the work of Gerry Finley-Day and Dave Gibbons. Other artists in this first volume are Cam Kennedy, Brett Ewins, Colin Wilson, Mike Dorey and Eric Bradbury. Alan Moore would provide a few of the stories. 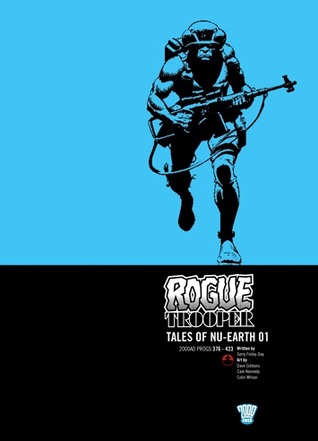 The story is set on is Nu-Earth (prepare yourself for plentiful future slang), once a paradise world at a hyperspace junction devastated by years of war between two great alliances – the Norts and the Southers. This planet is so poisoned by chemical weapons that in most places humans cannot survive without a sealed chemsuit.

Thus, the Southers created the blue-skinned GIs – Genetic Infantrymen – who can survive the poison atmosphere. But in their first action they were betrayed and massacred. One survived to hunt down the traitor outside the military chain of command – the titular Rogue Trooper. He is accompanied by his comrades, now implanted in biochips attached to his war-gear, still speaking to him as he roams the poison wastes.

Rogue’s history is revealed to the reader gradually, across a number of flashbacks. Each episode deals with another skirmish in the wastes of Nu-Earth, as Rogue and his comrades encounter another band of struggling Southers, and another part of the exotic Nort war machine. Wunderwaffe of the week, if you will – the Norts are practically copied from the pages of World War II comics of the time, complete with names like Wagner or Torpitz, yells of ‘Nain’, and a threatening lightning-cloud emblem. The Southers receive a blandly American depiction, with a scattering of references to the American Civil War (the Battle of Mek-Bull Run, Harpo’s Ferry). The reference to the war of brothers serves to suggest equivalence with the Norts – they are a half of the war machine that has killed Nu-Earth.

The image of the (practically) lone supersoldier and his quest is an arresting one, but the spread of adventures Rogue finds himself in don’t always match it. The schemes of the Norts sometimes divert from the outlandish to the camp, as do the perils of Nu-Earth. The Fort Neuropa arc is particularly out of sync in this regard.

However, when the various elements align, it can be satisfying. Gibbons’s livid, contorted faces wrenched from their gas masks are arresting. The variety of outlandish weapons works as well: hovering shrapnel mines, sentient barbed wire, hallucinogen-spraying tanks, poison saboteurs, the drop-troopers of the Nort Sun Legion apparently hang-gliding from orbit. It all adds up to a singular, nightmarish vision of future war.

Duncan Jones, known for his excellent debut Moon, is directing an adaption of the strip for the screen, so you might want to get a head start on that with this volume. The varying quality of the strips means that I am hard-pressed to give a single star rating to the material within – thus, I would brace yourself for an average of Two or Three Stars and be pleasantly surprised by the exceptions.