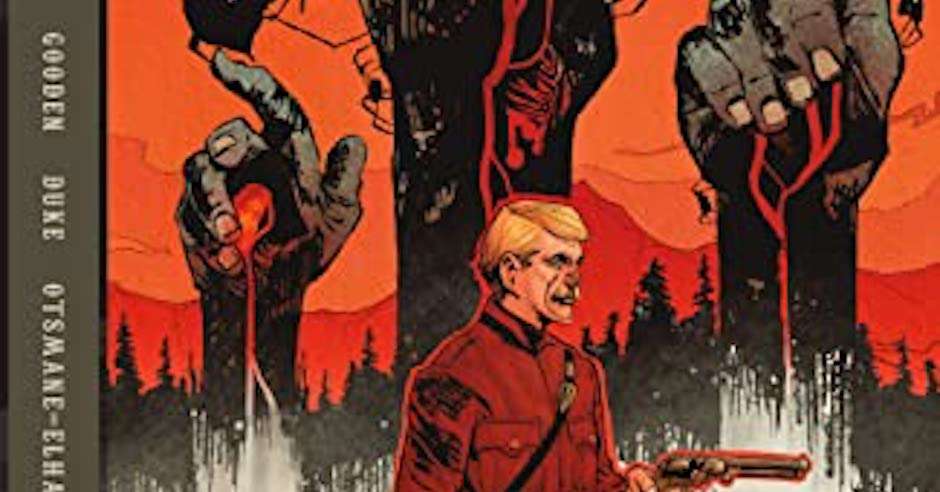 The tension gets seriously cranked up in The Rush #3 from Simon Spurrier and team. Things are going all kinds of crazy in the boomtown of Brokehoof for the intrepid Nettie as the search for her missing son heats up. After the major cliffhanger ending of the previous issue, where we were left with a heinous, spectacularly gory murder at the talons of an unspeakable and inhuman horror I couldn’t wait to crack the cover on this next chapter. And it seriously delivered. Within the mad, frozen, bloody pages of The Rush there is no shortage of danger that’s for certain and right out the gate Nettie must stare insanity square in the face—faces, actually. We find that the gold lust that sinks its claws into the treasure seekers of the north can drive them to violence at the blink of an eye, and Nettie is forced to flee for her life when it comes to light the claim her son had been working might be profitable. 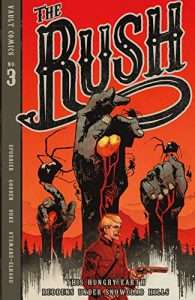 This is where things in The Rush take what could generously be considered a turn for the worse, which is saying something given how fraught with danger, violence, and madness everything has already been. But this is also the first issue of The Rush where, I suppose you could say, things stop hiding. We’ve been treated to the occasional taste of the terrible hidden things preying on the poor bastards seeking their fortune in the snow, but it’s not until here in issue three that we’re treated to some seriously stunning shots of what kinds of nightmares we’re dealing with. In particular, there’s a certain splash page near the midway point of the book that’s absolutely mind blowing.

I’ve lauded the art team of The Rush before, how they’re able to convey so much emotion. How the blood and action pops off the page. But this particular splash, it’s…I stared at it for a few minutes. It’s gripping. Beautiful, even, and maybe even a little bit unsettling. For all that, in particular here there’s a narrative device that’s been threaded throughout the previous issues but which comes to add a serious gravity to the story of The Rush here and that’s the snippets of letters Nettie is writing to her missing son Caleb. Through them her grief and heartbreak is made tangible, along with her single-minded desperation to find her child.

Combined with Simon Spurrier’s natural ability to string dialogue along, it creates a compelling read that has thoroughly sunk its hooks into me. I’ve caught the glittering gold fever for The Rush and cannot wait for the next installment, with issue three earning itself four stars like the previous—verging very close to five. Time will tell. This is shaping up to be an unforgettable story.