REVIEW: Screams from the Dark edited by Ellen Datlow 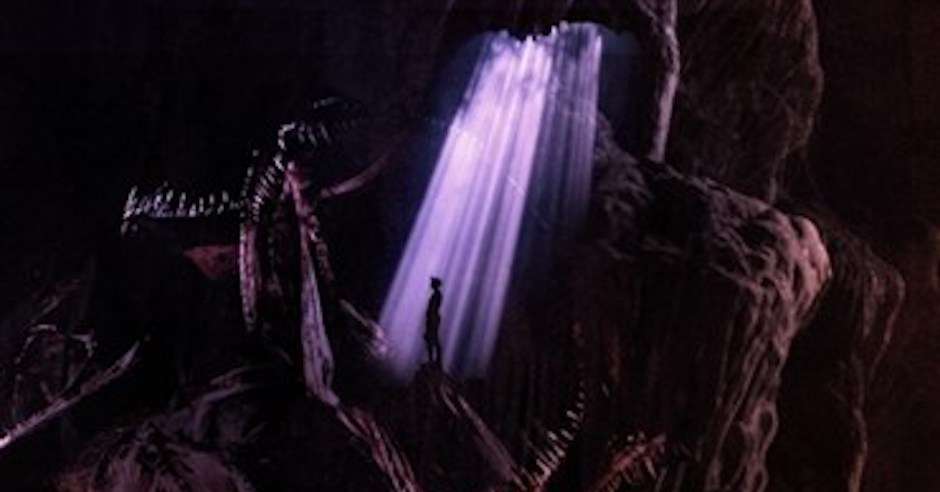 In Screams from the Dark, Ellen Datlow brings together twenty-nine of today’s boldest voices in horror to create an unflinching symphony of darkness that will haunt you long after you close the back cover. These all-original tales include stories by such established luminaries as National Book Award winner Joyce Carol Oates and two-time World Fantasy Award winner Caitlín R. Kiernan, as well as a phalanx of rising superstars in horror from across the globe. 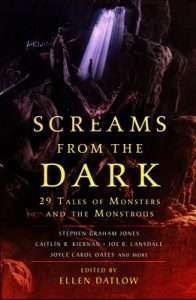 The short stories of Screams from the Dark are populated by monsters in all their twisted forms. Datlow begins Screams from the Dark with an enlightening introduction on the complicated etymology of the word “monster.” Originally interpreted as a warning for humanity about the omnipotence of God, the concept of a monster has evolved to embody anything that is grotesquely inhuman, bent on destruction and evil. Monsters are often portrayed as physically hideous or psychologically terrifying, a distorted version of ourselves. Physical manifestations of the monstrous embody the opposite of the humane, but also reveal our inner evil, helping us to understand the nature of humanity itself.

Screams from the Dark features all the standard monsters of horror literature, including vampires, skeletons, ghosts, witches, giants, sea monsters, werewolves, Bigfoot, and the requisite Cthulhu-inspired tentacle monster, here terrorizing an amusement park in “The Midway” by Fran Wide. There is also a fresh take on the Tasmanian devil, courtesy of Glen Hirshberg’s excellent story, “Devil.” More outlandish monsters appear in “The Virgin Jimmy Peck” by Daryl Gregory, where a cultist has been surgically implanted with a monster baby, and in “Sweet Potato” by Joe R. Lansdale, where a vegetable-scented succubus visits a lonely retired man who takes his newfound gardening hobby a bit too seriously.

Beyond the classic villains of horror, Screams from the Dark addresses monstrosities arising from ecological disaster in “Strandling” by Caitlín R. Kiernan and in “The Smell of Waiting” by Kaaron Warren. In a nod to current events, the impact of the COVID-19 pandemic is addressed in “Wet Red Grin” by Gemma Files, which details nursing home patients subjected to reddening of the bones, and “The Atrocity Exhibitionists” by Brian Hodge, centering on a rock star seeking pandemic-era social media fame through extreme self-harm.

My favorite story in this collection is “Crick Crack Rattle Tap” by A.C. Wise, which features a young single mother battling postpartum depression. She oscillates between wanting to be a good mother and feeling resentment toward her infant baby. The mother recites an improvised rhyme, accidentally summoning the demonic Rattle Tap, asking him to take her baby away. A.C. Wise does an outstanding job getting into the mind of a sleep-deprived mother losing control of her own mental processes in this twisted, nightmarish fairy tale, where Rattle Tap becomes an external manifestation of the beast within us all.

Another standout that brings our inner monsters to the forefront is “The Last Drop” by Carole Johnstone, which describes a 19th century murder trial. Although the story itself is fictional, all of the testimony is taken from the transcripts of real court cases published in the Dumfries and Galloway Standard and the Wigtownshire Free Press in 1862.

While I am emphasizing the heavier stories, there is also a lot of fun within the pages of Screams from the Dark. The opening story, “You Have What I Need” by Ian Rogers, features a woman who checks herself into the emergency room at Chicago Hopeless hospital after being bitten by a vampire, possibly infected with the vampire virus. During her quarantine period, the emergency room is viciously attacked by three vampires from the streets. Another dark delight is Richard Kadrey’s “What is Love but the Quiet Moments After Dinner?” which explores two lovers whose violent passions culminate in some casual…um…cannibalism.

The twenty-nine stories in Screams from the Dark masterfully examine the nature of monsters and monstrosities, both tangible and abstract. Ellen Datlow’s extensive experience as a short story editor shines throughout the entirety of this volume. Screams from the Dark earns my highest recommendation, ranking among the best compilation of short stories that I’ve read in any genre.

Read Screams from the Dark edited by Ellen Datlow