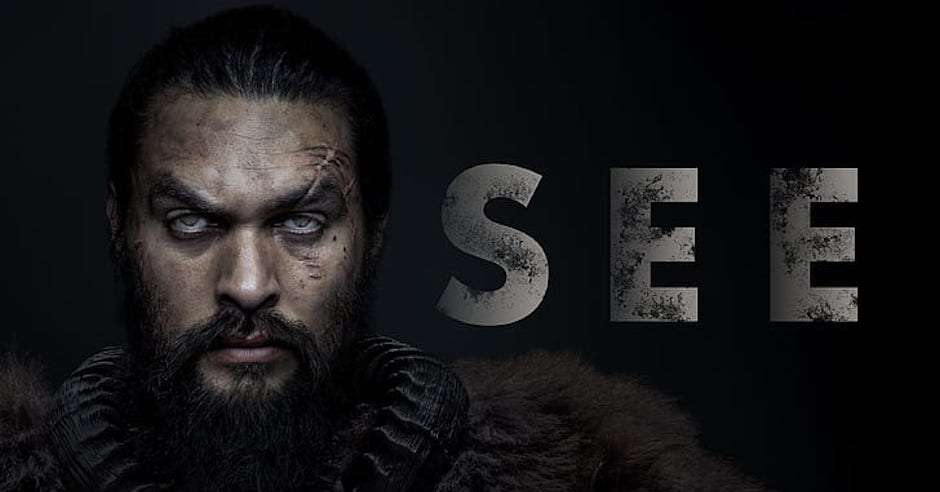 In a post-apocalyptic world where only two million humans remain and have survived without sight for five centuries, an army of witch finders hunt a woman and her twins. A warrior who has taken the woman and children as his own family will stop at nothing to protect them. In See, having sight is heresy, a forbidden myth of the past, a reason to burn whole villages, and the only hope for humanity to return to its former glory.

Jason Momoa plays Baba Voss, a brutal warrior leader, responsible for a town of mountain people, and love of Maghra, played by Hera Hilmar, mother of two children with sight. As the witch finder army attacks and burns, pursues and kills, Baba Voss must rebuild the home of his people while protecting his family from the pyre.

This series is brutal AF, and a cast of sighted actors playing blind characters is so well done: from communication, to relationships, down to the very way they move through the environment. I’m not blind or disabled, but the approach to a civilisation without sight just landed magnificently on the silver screen. There were so many small details that just seemed to be done right, and I think a special mention to Momoa needs to be made for his depiction of Baba Voss in everything from loving father of adopted children to unrestrained killer.

In addition, the post-apocalyptic scenery is magnificent, without feeling ridiculous or overdone or soaked in CGI. It becomes this dark background reminder of a time generations past when the word was full of light and not blinded. The world created for this tale is so full of background stories that it just feels magnificently realised, as if you could pick a setting or a secondary, even tertiary character and there would be plenty there to create another series about. The theme of bigotry between the sighted and unsighted is also well, if not bluntly, done. All of our current bigotries that rely so much on sight are all gone, reduced to a single question of if you have something that gives you power over others.

See was so good all the way through to the last episode. The changing allegiances, the unknown, the plot twists, were all magnificent. But to have a show finish where every person on my couch just kept looking at each other asking something that started with “but why didn’t …” just killed the ending. And this wasn’t even with the big plot twists or story arcs; it just felt like a lot of small silly errors in the last twenty or so minutes just put little stab holes into the ending of a really enjoyable show.

Overall, See was a magnificent television experience. The cast and crew absolutely nailed it. The team that came up with the blind society in all its little quirks and qualms deserve an award. There’s no scenery chewing in this blunt and brutal show; it’s gorgeous, dark, and well-realised and I cannot wait to get into season two.