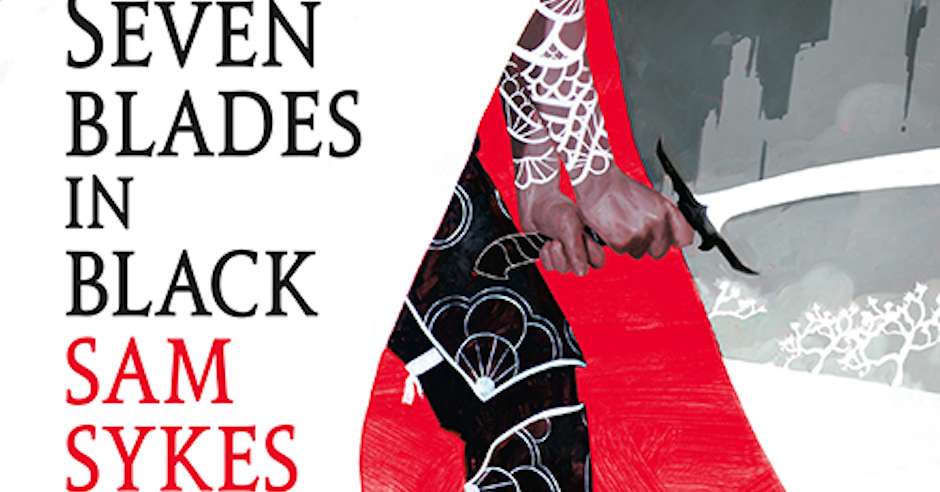 “Before you embark on a journey of vengeance,” the old adage goes, “dig two graves.” Sal the Cacophony, the protagonist of Sam Sykes’ new Seven Blades in Black, didn’t get the memo. Betrayed by those she loved and trusted most, Sal was robbed of her magic and left for dead. Armed with a sentient gun, a bottle of whiskey, and a fistful of spell-worked bullets, readers follow Sal as she carves a path of destruction across the blasted wasteland of the Scar in relentless pursuit of the thirty-three mages who took everything from her. After all, what are a paltry two graves to a woman who’s filled cemeteries? 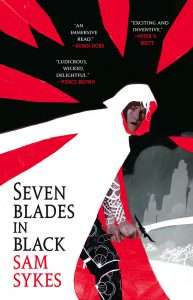 Readers receive a firsthand account of Sal’s bloody vendetta from the woman herself. In terms of structure, the majority of the novel is a first-person frame narrative with Sal recounting the events that led to her capture moments before her impending execution. As the lead character and protagonist, Sal is a fascinating dumpster fire of a human being with a drinking problem, an itchy trigger finger, and an unforgettable narrative voice. While I sometimes struggle with stories told in flashback, I felt like this slightly unconventional structure did a great job of putting readers in the interrogation room with Sal and allowed her to tell her story to best effect. On the whole, I found Sal to be a first-class antihero with all of the depth, realism, and moral complexity the archetype entails.

In her hunt for the wizards who wronged her, Sal is joined by an idealistic soldier named Cavric and Liette, a sorcerous artificer who’s smarter than everyone else and damn well knows it. While both of these characters were complex enough to stand on their own, their dynamic and interactions with Sal and each other truly made them shine. Cavric’s wide-eyed optimism, for example, paired nicely with Sal’s frank cynicism and led to some great dialogue and top-notch development for both characters. On the other side of the conflict, the mages who oppose them make for equally compelling antagonists—my personal favorite being the nightmarish Taltho the Scourge, a half-insane illusionist with slashed-off lips and dead trees tattooed up and down his arms.

At just over 700 pages, this substantial book could likely be considered a bludgeoning weapon in some countries, but solid pacing, cinematic action, and the constant tension and high stakes of Sal’s hunt keep the plot moving and pages turning at a timely clip. Among these factors, I found the fight scenes to be a real standout. On social media, Sykes has discussed the Japanese-RPG-inspired roots of this novel, and the anime-esque scale and aesthetics of every wizard Sal duels translate surprisingly well to the written word. More importantly, I thought the author did a great job of avoiding pulpy blow-by-blow action and instead offered up conflicts full of emotion—feelings of betrayal, rage, and tragedy—that really gripped me as a reader and made me care about who walked out alive.

While this book leans more toward heroic fantasy than grimdark, the sorcery-scorched wastelands of the Scar are bleak and bloody enough to satisfy any fan of the subgenre. And beyond the charred earth, impoverished Freeholds, and the flesh-stealing horrors that populate it, the factions that war over the land are little better off. The Revolution is composed primarily of brainwashed zealots and the leaders who exploit them and carelessly waste their lives. The Imperium is a nation of decadent, opera-loving wizard aristocrats where non-magical citizens (Nuls) are little more than enslaved serfs. Haven is a theocracy ruled by a horrific priesthood and the disturbing magic their god grants them. All in all, the Scar and the surrounding world provide an excellent backdrop for a protagonist as morally complex as Sal and a great sandbox for her adventure.

On the subject of worldbuilding, the novel’s magic system was one of my favorite elements. The Imperium’s mages pay a price called the Trade whenever they cast a spell, and the short and long-term costs of this bargain vary by what form of sorcery they practice. Nightmages for example, can weave illusions and beguile the senses of their foes with waking dreams. In exchange, they gradually lose their ability to sleep without horrific nightmares and become warped by chronic insomnia. Gatemages can teleport in the blink of an eye and move legions with little preparation at the cost of temporary (and eventually permanent) paralysis. While this magic system was more art than Sandersonian science with hard and fast rules, the Trade’s sense of tragic romanticism really worked for me as a reader.

Darker elements aside, this book is far from bleak. Seven Blades in Black is a fun-as-hell read, and fans of Sykes’s previous work (or his Twitter account) will recognize and enjoy his usual humor. In addition to some familiar elements (giant aerial combat birds, feuding powers turning cities into battlegrounds, etc.), Seven Blades in Black contains the same wildly inventive worldbuilding and deeply emotional stakes that made the Bring Down Heaven trilogy excellent. Overall, I can wholeheartedly give this book five stars and recommend it to any reader with an interest in sorcery, a thirst for vengeance, or the simple craving for a good novel.