REVIEW: Seven Deaths of an Empire by G. R. Matthews 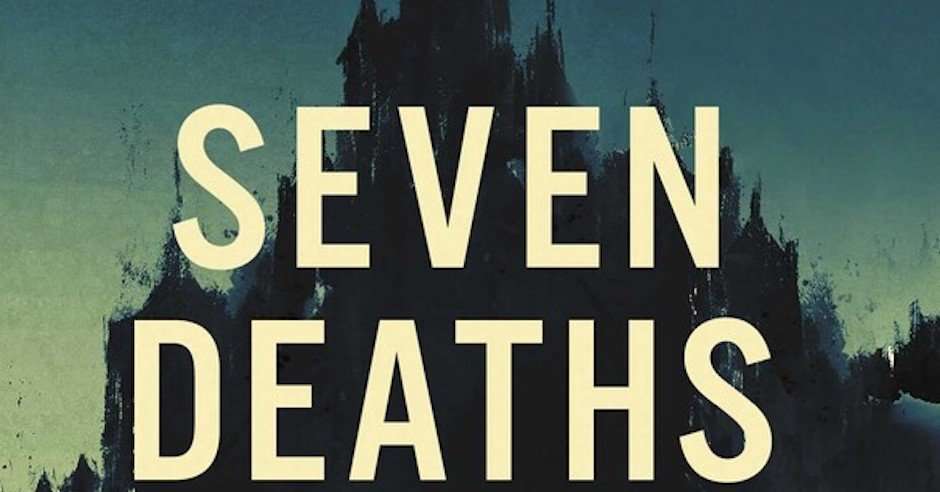 Seven Deaths of an Empire is a new story from author G. R. Matthews. Matthews weaves a tale of action and intrigue that wears its inspirations on its sleeve for all to see. A classical fantasy story wearing the blood-soaked cloak of grimdark, Seven Deaths of an Empire is a book with mass appeal that fans of Tolkien and Feist through to Joe Abercrombie and Anna Smith-Spark will all enjoy. 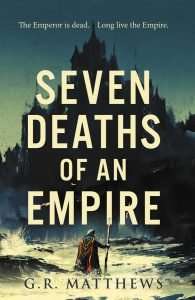 Seven Deaths of an Empire opens with the death of the emperor. This is the catalyst for a tale told through the differing perspectives of General Bordan and the magician, Kyron. Limiting the story’s perspective to these two protagonists allows Matthews to write a tight tale that really draws the reader into the mind of those characters and grow with both as they journey on their differing paths. General Bordan must deal with turmoil and chaos of life in the empire following the death of its leader and the political upheaval caused after such a lengthy period of the emperor’s rule. Enemies both in and outside of the empire look to climb the ladder of chaos caused by the emperor’s death and Bordan struggles to ensure that his beloved empire does not crumble. It is through Bordan’s eyes that the reader is able to witness the warring elements within the empire and see the struggles that face an old empire filled with many moving parts and individuals who each want to keep hold of the power they crave. He is the one who stands firm in the face of the storm whipping around him as he does everything that he can to ensure that the emperor’s body makes it back to the capital so that his Flame (soul and memories) may be passed onto the next in line.

Meanwhile, the young apprentice magician, Kyron, is part of the group tasked with ensuring that the emperor’s body makes it back to the capital in one piece. The problem: they must pass through enemy territory to make it and their numbers are dwindling with each battle. In Seven Deaths of an Empire, it is Kyron that Matthews uses to fill the reader in with the history of the empire and its relentless view of progression as it battles to against the tribes of the forest. Kyron’s ignorance and bias at the start of the story allows him to grow throughout the book and the scenes with his master Padarn, as well as forest guide Emlyn are some of the best in Seven Deaths of an Empire. Matthews’ message of growth and wanderlust and the will to open one’s eyes to a wider world are much needed at this time. Kyron views the world as black and white to begin with but as his understanding of both the empire and the tribes grows, he sees the patch of grey in the world that blurs the lines of good and bad. Not unlike Uhtred in The Last Kingdom, he starts to see both the good and bad on both sides of the line that has been drawn in between two factions.

With a title like Seven Deaths of an Empire, it was clear that this would be a bloody affair. The deaths come thick and fast and Matthews writes the battles with a keen eye on the perspective of those involved. General Bordan views the battles with a strategic slant through the eyes of an experienced yet weary soldier. Alternatively, Kyron sees the chaos of the battle and must work hard to find his place as the bodies begin to fall. Each chapter alternates between the two perspectives and due to the brevity of most chapters, it took me a bit of time to get a feel for the characters but it wasn’t long before the Seven Deaths of an Empire became a book I was unable to put down.

Seven Deaths of an Empire is the perfect blend of classical fiction and grimdark. Matthews has crafted a fast-paced novel full of so many shocking moments my jaw began to ache from dropping so often. Inspired by the masters of the fantasy genre as well periods of political upheaval throughout history (watch Netflix’s Barbarians – the Roman Empire halted by the union of Germanic tribes in a forest), this is fantasy at its finest. A magnificent, bloody beginning to the series and I cannot to read more. Five Stars.

Read Seven Deaths of an Empire by G. R. Matthews