In Shadowplay, Prince Barrick and Captain Ferras Vansen find themselves behind the Shadowline. The young prince has been assigned a task by the Qar noblewoman Yasammez, although he doesn’t yet understand what it is. Elsewhere, upon realising the treason committed by the Tolly family to the crown of Southmarch, Princess Briony and the master-of-arms Shaso try to escape the city with the aid of the young Skimmer girl Ena.

“Let us hope for your sake that you did indeed sense some of Gyir’s thoughts, Captain Vansen. Because there are other things behind the Shadowline, as you doubtless already know, that you would not want crawling around in your head, or anywhere else on you.” 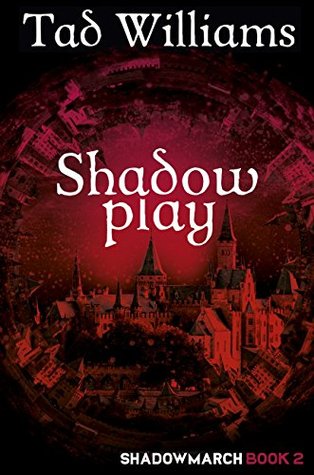 Qinnitan is finally free of the Autarch and has been residing for a month in the huge city of Hiersol as a washerwoman, whilst looking after her adopted brother, the mute boy Pigeon. Unbeknown to her, the Autarch is keen to reclaim her and has sent a mercenary spy to do his bidding. In addition to this, the Autarch, the God-on-Earth of Xis, is sending his gigantic war fleet to Hiersol as his first step into taking rule of all Eion.

The above mentioned are the main storylines that we follow but we also find out more about the court poet Matt Tinwright who is love-stricken, about the funderling Chert and the physician Chaven and how they intend to reclaim Chaven’s stolen mirror, and about a young nobel woman in Hiersol who becomes unlikely friends with the prisoner, King Olin.

Although Shadowplay is still a slow-burner, events progress more swiftly here than they did in the previous entry. We get to know the point of view players in more depth, travel to and see a vast amount of the detailed fantasy world, and are given much more information about the Gods. The latter is presented via segments at the beginning of chapters and through stories told by characters as part of the main narrative. This sheds more light on the Gods’ presence, or lack of, during current events. There are about four new point of view perspectives that are new to Shadowplay yet none of these, with the possible exception of Daikonas Vo, are yet as interesting as those that we followed previously.

There are some brilliant new characters in Shadowplay. Gyir the Storm Lantern has an exceptional role here and he’s become one of my favourite characters that I’ve read about in fantasy for some time. He’s a faceless, powerful, fairy-warrior (Qar) who hates humanity, (“sunlanders” as he refers to them), but an unlikely situation dictates that he becomes allies with two of the main players and they face some horrendous scenarios together. Another standout character is Skurn, the awesome, quite comedic talking raven. I have a soft spot for talking animals in fantasy so Skurn definitely ticks that box. Finally, the previously mentioned Daikonas Vo, who wins the respect of the Autarch in a warrior showdown, is an enticingly cunning, scheming and brutal character with many skills an assassin would kill for. (No pun intended.)

It is a welcome feeling too when likeable side characters from the previous entry return such as the rooftopper Beetledown, and Gil-the-pot-boy who I’m sure is far more important than has been revealed thus far.

There are a huge amount of standout moments in Shadowplay, far more than the first entry. A showdown versus a demigod, a dreamlike passage through another dimension, the unpredictable death of a major player, and the heroic death of another main character are just a handful of examples. Although less than a year has passed since the events presented at the beginning of Shadowmarch, so much has taken place.

“I’m tired of being lost and I’m tired of dying, so I’m going to try something different this time.”

At the novel’s finale, there are about eight different story arcs that are happening concurrently. I was extremely satisfied with the ending of the tales, especially Brionny’s, Qinnitan’s, Barrick’s, and Vansen’s. Some of the final moments were exciting and intense, others were unpredictable and surprising, but at the halfway point in the Shadowmarch saga, I am now completely engrossed. I am finding it impossible to get into any other novels at the moment as I am so gripped by, and invested in Williams’ world. I’m completely lost in this epic story like Prince Barrick is behind the Shadowline. Shadowplay is an excellent continuation of the epic, dark fantasy tale that started with Shadowmarch and I can’t see myself reading anything else until I’ve finished both Shadowrise and Shadowheart.

Check out my review for Shadowmarch here.