REVIEW: Shadows of the Short Days by Alexander Dan Vilhjálmsson 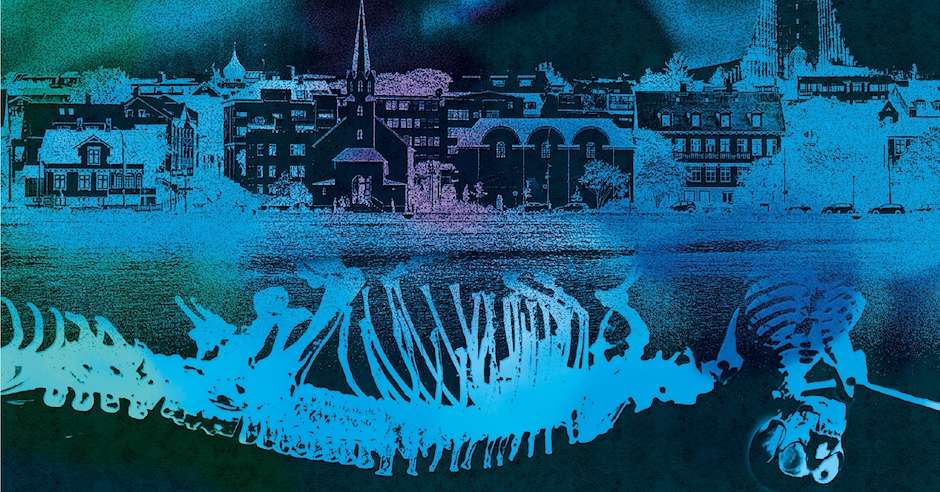 Vilhjálmsson’s debut is a masterfully crafted dark tale that fuses elements of alternative history, steampunk, science fiction, urban fantasy, and grimdark. It is a strikingly original and often complex narrative that mainly follows two well-crafted protagonists. Sæmundur is a sorcerer who has recently been expelled from the magic university of Svartiskóli for being too ambitious, being intrigued by gaining absolute knowledge of the esoteric source of magic galdur which is forbidden and borderline heresy. He has been nicknamed Sæmundur the Mad, is now a drug and alcohol-fuelled reprobate in the eyes of the majority of his peers but he wishes to prove them wrong. The other major player is Garún who is a talented graffiti artist and she wears headphones which contain a noisefiend. She is a half-breed known as a blendingur and she has a political agenda that she magically bleeds into her artwork often brainwashing people to the cause of a potential revolution. 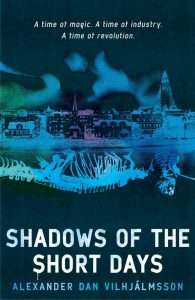 Shadows of the Short Days was a similar reading experience to the one that I enjoyed with The Gutter Prayer by Gareth Hanrahan. It takes certain fantasy tropes and turns them on their heads and breathes fresh air into the genre. This story is brimming with interesting original races, magic and monstrosities including the winged and intimidating Náskárar, the art of seiour, and a cloth-golem are examples respectively. The novel — which I believe is the first of a pair that Gollancz have commissioned — features parallel worlds, demons, jellyfish that aid breathing underwater, huge airships, rebellious factions, grotesque torture segments, mind-reading, complex incantations, and magical rituals, and a loveable pet cat amongst many other elements.

It is written in the third person following the two aforementioned main characters for the most part; however, there are a couple of chapters that are from a different perspective to add extra depth. Like many debut novels, to add weight and complexity to the characters we are treated to a few flashback scenes. These also aid in the narrative presenting the overall world, the folklore, racist views and undertones held by some, and past character relations. The supporting players were not as fully fleshed but were still interesting with their backstories and their own dilemmas. One minor criticism is that some of the characters names were confusing and I had to write notes to remember who was who. Names such as Styrhildur, Hraki, Hrolfur, Katrin, Kölski — I also occasionally forgot who was male and who was female, and when a character reappeared near the end of the story I had completely forgotten who he was so had to re-skim previous chapters to put it all into context. A good amount of the terminology here I believe is crafted specifically for this alternative worldview of Reykjavik. Fortunately, the novel includes a glossary of the more confusing/difficult words. I’m hoping that the final version will include a Dramatis Personae and a map of the city where most of the action takes place.

It was not an ‘unputdownable’ novel that I raced through in a few days but it was a book that every time I picked up I truly wanted to savour every word, event, development, and chapter. It’s superbly well written, thrilling, and the pacing is exquisite. The latter is often due to a mid-chapter point of view switch at certain times throughout to accentuate the pacing, emotion, and intensity when it was needed. The finale is complex, slightly confusing and features a major revelation. I did have to re-read it twice and I still didn’t fully understand it, especially the epilogue, but like Malazan, I think this is a story that will be much better when reading it for a second time, which I definitely will at some point. Shadows of the Short Days is 5-stars for originality, 4-stars overall, but I’m sure this could increase when I re-read this before the next book in the Hrímland saga is unleashed. Vilhjálmsson has presented us with one of the most ambitious, intense, original and thrilling debuts that I’ve read in a long time. If there was a Board of Book Classification I would give this one an 18+, some scenes out-dark some of the modern brutal grimdark and it’s not always enjoyable to read for that reason. Either way, this is highly recommened and should be a big deal in the fantasy scene. I’ve also researched that Vilhjálmsson is the vocalist of a black metal band which doesn’t surprise me following a few scenes that are featured here and the importance of sound and noise throughout. Now, if you will excuse me I am going to listen to some of his music.

I received an uncorrected proof copy of Shadows of the Short Days in exchange for an honest review. I would like to thank Alexander Dan Vilhjálmsson and Gollancz for the opportunity.