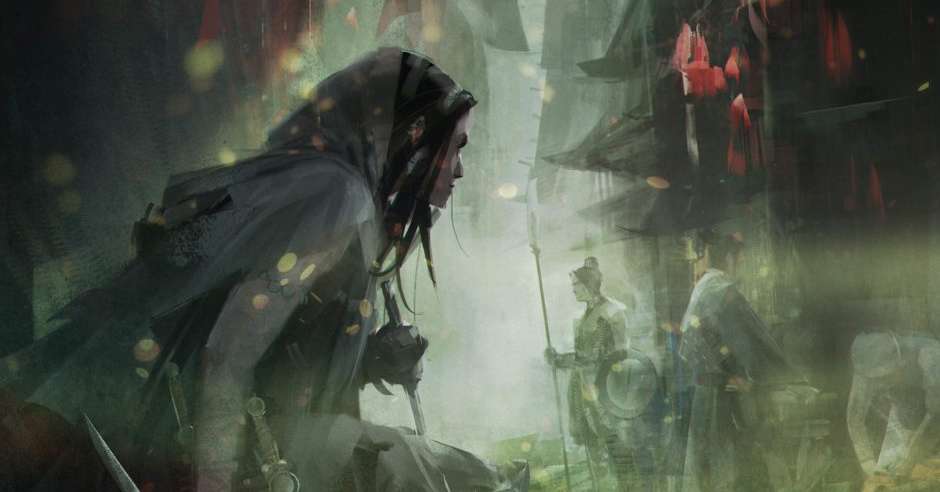 Skullsworn is Brian Staveley’s new novel set in the world of his popular and highly acclaimed The Emperor’s Blades and Chronicle of the Unhewn Throne Trilogy. When Skullsworn became available for review, I was reluctant to do it because I haven’t read any of his Chronicle of the Unhewn Throne novels. Since it is marketed as a stand-alone novel, though, I decided to give it go, knowing that I can always cast it aside if it becomes unintelligible. Well, that never became necessary since I ripped through Skullsworn in less than a week. It is one of those novels that you won’t want to put down, and when you have to, you will still think about it. I absolutely loved it. Those of you who have read the Chronicle of the Unhewn Throne will likely love it too and I hope you’ll give me a break if my obvious unfamiliarity with the trilogy becomes painfully apparent. 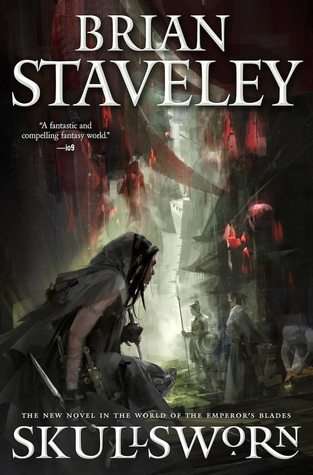 Skullsworn tells the story of Pyrre, a young woman striving to become a priestess of the death god Ananshael. To achieve this, she must pass a Trial that requires her to kill several people described in a ritualistic song, including “the one who made your mind and body sing with love”. Unfortunately for Pyrre, she has never really felt love, but she has come pretty close. It was several years ago in Dombâng, a city built over a swamp swimming with vicious creatures that are almost as treacherous as the city’s inhabitants themselves, where she met Ruc Lan Lac in a fighting pit and fell in lust. Now she needs to actually fall in love and kill the person she loves to become a priestess of death. She sees Ruc as her best bet. So off she goes from her pleasant home in Rassambur to the highly unpleasant city of Dombâng, currently under tenuous control of the Annurian Empire and its local commander, yes, Ruc Lan Lac, to find him, fall in love, and kill him. Accompanying Pyrre on this pilgrimage are a priest and priestess of Ananshael: Kossal, a near-elderly, taciturn gentleman, and Ela, a free-loving, snarky aging beauty. They must bear witness to Pyrre’s Trial. This deadly trio makes their way to Dombâng not entirely without incident as a near-calamitous bridge failure almost cuts their journey off before it has begun. This bridge incident immediately takes the reader from a pleasant stroll to grim mayhem at the outset of the story, which then never lets up on the violence and tension.

For Pyrre, however, falling in love proves much more difficult than turning an entire city on its ass and pushing it to the brink of revolution. Dombâng is beautifully depicted both in its physical structure, a ramshackle den of squalor set on stilts over a labyrinth of canals and swamp, and its tense relationship with its occupying force, Ruc Lan Lac’s Greenshirts, the military police that oversees the city’s functions as well as its beliefs. Pyrre and Ela throw themselves headfirst into the city’s turmoil while the fastidious Kossal keeps his head above the pandemonium for as long as possible. Throughout the twists and turns of the unraveling plot, this deadly trio proceeds towards the point at which Pyrre must take her fate, her future as a priestess, into her own hands and, together with Ela, Kossal and a couple other uniquely strange characters, must confront Dombâng’s ancient mythical enemy – if it actually exists – and her own past. It may seem a like a lot for a relatively short, 318-page novel, but Staveley pulls it off deftly without an ounce of flab.

The juxtaposition of love and death forms the core thematic thread of Skullsworn. Not only has Pyrre not felt love, but she does not even know what it is supposed to feel like. Complicating this is the idea that death is all-consuming, religiously paramount, and as easy to recognize as it is to create. Pyrre is a killing machine, but she must stick to her Trial which does not allow unnecessary murder. Ela and Kossal, on the other hand, make Pyrre look like an amateur. They kill at will, presumably giving Ananshael the lives of anyone they feel aren’t worthy of animated existence. Amongst all this death and the decadence and decay of Dombâng, Pyrre must find love, and Staveley does a nice job of exploring how a deadly force like Pyrre sorts this out in her mind. And, luckily for an old curmudgeon like me, who would rather bash in his skull with a George R.R. Martin hardcover than read YA fiction, Staveley deals with love in an entirely adult, mature, and only mostly tasteful way, blurring the distinction between lust and love until the final curtain is about to fall. I would love to tell you more, but nope, no spoilers.

Aside from the obvious but definitely not heavy-handed thematic content of Skullsworn, the real diamonds in this swamp are the characters. The story is told in the first-person voice of Pyrre as she undergoes her Trial. She is beautiful and intelligent and flawed, carrying a hardened exterior from her painful childhood that has kept her from knowing love. The two main secondary characters are equally compelling. Kossal is a quiet, aging man, mostly a mystery to Pyrre, who goes about his business watching over Ela and Pyrre and keeping them safe. Ela, on the other, nearly steals the show. She is absolutely hilarious, carefree, and droll. Just when things seem most dire, she comes up with a comment that had me laughing out loud several times. Staveley’s characterization of these three unique and complex individuals is subtle, deep, and vivid. I really felt like I got to know them, except for Kossal, who wouldn’t allow it. They are most responsible for my reluctance to close this book for the few days I was consumed by it.

Staveley’s prose is also extremely compelling, stripped of ornament without being the least bit boring or minimalist. The city of Dombâng comes alive under his deft hand, which not only paints a vivid picture of its rickety walkways, makeshift shanties, dive bars, swirling shit-filled canals, and murky swamp waters but also the tension and fear of its inhabitants and their tenuous existence in a remote and violent middle-of-nowhere city. Similarly, the action and plot are pushed forward relentlessly by Pyrre’s narration. The descriptions of pit fights and murders, riots and drunken mobs, deadly critters and sexy waiters thrust the reader right into the midst of a place that no one in their right mind would want to be and push forward inexorably toward the dual-threaded grand finale.

If I have to come up with one shortcoming in Skullsworn (and I don’t but I will just so I seem more professional than the fanboy that I am), it is that the stakes are not earth-shattering. This is really a personal (very personal!) story of Pyrre’s quest for love in a world of death. What’s at stake, originally, is whether or not she becomes a priestess, and I wondered for a while if this was enough to drive an entire novel. Her quest, though, lights a fire under so many different problems that, in the end, I found Skullsworn to b