Kurt Vonnegut is one of the American masters. Wry, tragicomic, simple yet constantly evocative. There are reasons for his enduring popularity, and reasons to be worried when posthumous adaptations such as Slaughterhouse Five are announced. 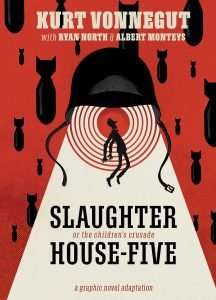 Yet the writer of the adaptation, Ryan North, has been one of my favorite writers for a long time. I’ve enjoyed his work since Dinosaur Comics was still in its infancy, and I’ve seen him get more mainstream success with Chooseable Path Shakespeare books, a mainstream Marvel comic with The Unbeatable Squirrel Girl, and his ‘How To Invent Everything: A Survival Guide for the Stranded Time Traveler.’

Adapting a famous piece of prose can be done simply, but North and Albert Monteys, the artist, wanted to make sure this graphic novel version of Slaughterhouse Five used the medium of comics to its fullest potential.

It follows Billy Pilgrim, an inept soldier, captured by the Germans, who is sent to POW camp in Dresden prior to the city’ firebombing. Billy survives when most of the city has died. But he becomes unstuck in time, leaping about through parts of his life without control. When he gets abducted by aliens, it’s really a relief. 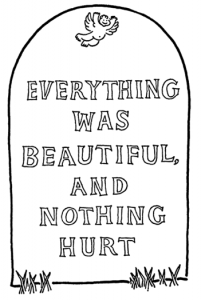 To be clear, they didn’t cause him to be unstuck in time. The Tramalfadorians explain to him that they’re always unstuck in time the same way too. They see someone at all points in their life simultaneously.