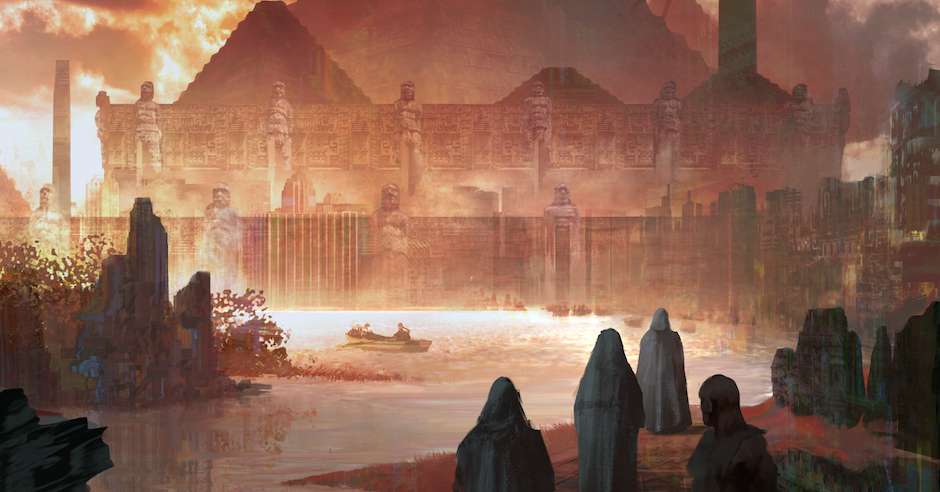 In Michael R. Fletcher’s Smoke and Stone, the entirety of mankind dwells within the city of Bastion. Surrounded by crimson sands and sculpted from a single, seamless piece of rock by the hands of the gods themselves, the city’s society is fractured by a rigid theocratic caste system. While divinely empowered guards and a series of inner walls help to maintain a brittle peace, trouble is brewing. As hungry gods prepare for war and the city’s poorest (the Growers) chafe under the yoke of lifelong slavery, Bastion’s ancient streets threaten to run red with blood. 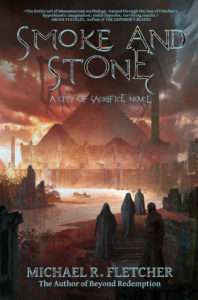 Readers experience the brutally divided reality of life in Bastion from two characters’ perspectives. The first is Akachi, a sorcerer-priest of Cloud Serpent, god of the hunt, and son of his deity’s high priest. Raised in the privileged luxury of Bastion’s highest caste, Akachi is given his first parish and a small troop of outcast guards in an impoverished Grower district full of criminals, dissidents, and heretics. The second POV character, Nuru, is an illegal street sorcerer in a struggling gang. When a mysterious scarred woman and a dark spirit from beyond Bastion’s walls offer her a chance to strike back against her oppressors, she finds herself drawn into the larger societal conflict and the brewing divine war.

Throughout the novel, Fletcher skillfully juggles these POVs and switches between them at particularly tense beats in a way that kept me turning pages like a madman. Both characters are believable and sympathetic to begin with—Akachi in his well-meaning prejudice and all-consuming drive to please his father and Nuru in her desperate need to keep her friends safe and escape her terrible circumstances. Watching them change and develop in the face of unthinkable choices and desperate situations is intensely gripping to read. The author does a great job with both character arcs, and as in all the best grimdark, some changes aren’t for the better.

While I could prattle on for ages about how much I enjoyed the narcotic-based magic system these characters use, I think Fletcher does a better job of gradually and organically revealing its practices and powers through the narrative itself. The other aspects of this novel’s worldbuilding were equally excellent. The author did a great job of using little details like Grower clothing, caste-based food, and local slurs to flesh out the city’s culture and make a setting as fantastical as Bastion feel believable and grounded in reality. Bastion’s gods aren’t your mother’s pantheon—from the eldritch chaos of Smoking Mirror (god of night and chaos), to the flayed terror of Father Death (lord of the unliving and current king of the gods)—Fletcher’s take on divinity, reality, and the power of belief are as striking and keen as ever.

Overall, one of the things I enjoyed most about Smoke and Stone is how it brings truly original concepts and elements to the table. With every novel he writes, Fletcher has a way of contributing something brilliantly twisted and utterly unique to the Fantasy (or scifi) genre, and I found Smoke and Stone to be his best work yet. All in all, this book is as grim and dark as they come, and I wouldn’t hesitate to dub it a 5-star must-read for any GDM subscriber or fan of the genre.