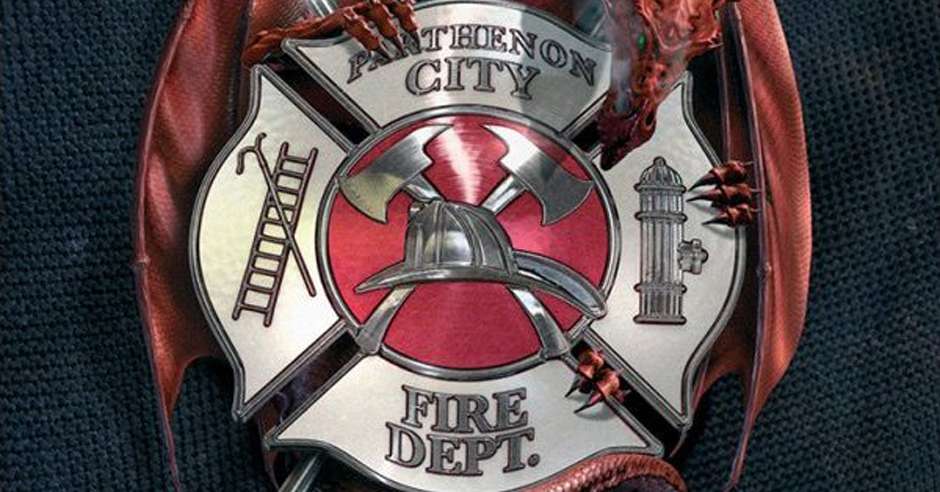 Dragons, fire-fighters, post-collapse America, powered mech suits, robots, ghosts: Smoke Eaters by Sean Grigsby is a heady mash-up of tropes and genres. The novel could loosely be described as a mix of cop drama, urban fantasy and Robotech that is, fortunately, held together by refreshingly authentic characters. And while the worldbuilding is unapologetically ludicrous, it’s a self-aware sort of ludicrous, not so farcical that it fails to provide the necessary conflict and tension for the characters. 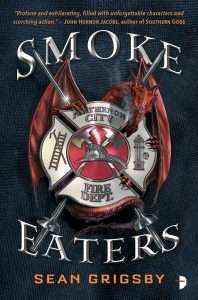 Smoke Eaters is not grimdark fiction, but it borrows from enough genres to defy classification. The setting, for example, is an almost even split between fantasy and SF: a future America besieged by hordes of dragons. These beasties first emerged from hidden subterranean burrows on the fateful occasion known as E-Day and have continued to pillage and burn the countryside ever since. In a strange quirk, people killed by the dragons become homicidal wraiths that attract even more dragons. Thinking too hard about the logic of the premise will only result in a headache. Best to go with the flow. Trust me.

Our hero, Cole Brannigan, is a rank-and-file firefighter just shy of retirement, looking forward to all the things retired guys look forward to. (Actually Brannigan dreams about spending his days having great sex and learning how to oil paint, so he’s perhaps more optimistic than the average near-retiree.) However, in a world teeming with dragons, firefighting is a particularly hazardous business, and during one of his final call outs Brannigan gets trapped in a burning house with a dragon. In the course of trying to save his similarly trapped colleague, Brannigan discovers that he is a smoke eater, a person immune to dragon smoke and gifted with supernatural tolerance to heat. Only a cursory hand-waving attempt involving dragon DNA or some such silliness is made later in the novel to explain why some people possess these gifts, but as with much of the novel’s world-building it’s best to just go with it.

His talents revealed, Brannigan is inducted, or more precisely press-ganged, into the service of the Smoke Eaters, the arm of public service specifically tasked with neutralising the dragon threat. It’s the standard fish-out-of-water scenario, and Brannigan’s grizzled fire fighter’s cynicism and less-than-youthful age make him particularly out of place as a raw recruit.

His classmates are Afu, an affable Samoan chap; Thomlin, the requisite pain-in-the-ass young gun wanting nothing better than to put the “old man” in his place; and Williams, who in a similar though more understated fashion than Thomlin, is dismissive of Brannigan. Captain Jendal and Sergeant Puck, the recruits’ direct supervisors, round out the Smoke Eater roll call.

As for the brass higher in the chain, you probably know the script for how Brannigan gets along with them: he fast establishes himself as someone who acts first and does paperwork later, a trait generally frowned upon in public service. For example, when a bunch of expensive droids financed out of the Mayor’s budget block Brannigan’s way, he’s got no problem lopping them into scrap. Cue the obligatory chewing out in front of the Smoke Eaters’ boss, Chief Donahue.

If you’ve watched your share of cop dramas, then you know how that dynamic works. Part of Brannigan’s struggle is the need to win over his classmates and supervisors so that they’ll back him up with the boss. Of course, we know that it’s only a matter of time before his firefighting experience and brash mettle impress his classmates and immediate superiors as they trudge through basic training. Sure enough, he begins to prove his worth during a forest fire after dragons set fire to the brush around them and he uses his fire fighter’s wisdom to save his colleagues from being roasted alive. Slowly, the other recruits come to respect him, although it is a rocky road with plenty of failures.

Bundled alongside this narrative of Brannigan’s struggles is a deceptively innocuous mystery. Brannigan is haunted by what he believes he saw at the house when his smoke eater talents first became apparent: a white fire that attracted the dragon to the house. He suspects someone is manipulating the dragons for their own ends, and as the novel progresses this plot-line begins to assume precedence.

By now it’s probably obvious that rigorous logic testing isn’t this novel’s strength. There are times when the fantasy rubs uncomfortably against the science-fiction, and I really had to suspend my disbelief when there were wraiths, dragons, and laser sword wielding mechs all crowding the same page. The science-fiction world building also felt hurriedly conceived. I struggled at times to reconcile the discrepancies in how different types of technology had advanced. For example, robotic droids able to perform the functions of firefighters and police are on the horizon, but these advances in technology didn’t feel consistent across the whole world. The firefighting equipment, for example, is decidedly archaic. Fortunately, the setting as a whole is tongue-in-cheek, so it is a forgivable shortfall. For the most part the logic holes don’t get in the way of the story.

Brannigan’s humanity carries the narrative, so no matter how ridiculous his surrounds, his character comes across as authentic. Never mind the mash-up of firefight