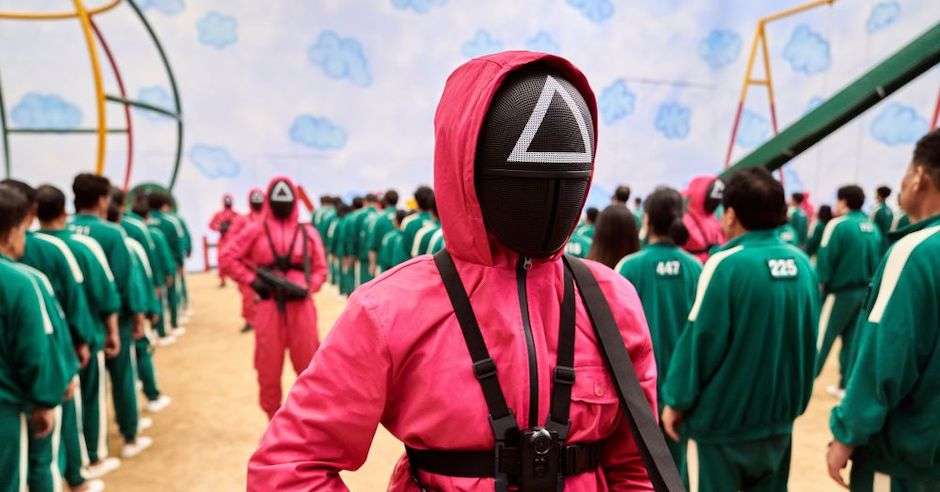 In Squid Game, the latest piece of brilliant Asian games-based deadly horror TV translated to English by Netflix, a group of people up to their eyeballs in debt join a deadly game to win riches. They just have to survive six childhood Korean games, and they are deadly and bloody as all hell.

Seong Gi-hun and Cho Sang-woo are childhood friends. They would play the squid Game, a mixture of physical handicap, physical prowess, and team sport. Both seemingly at opposite ends of South Korea’s socio economic scale with Seong Gi-hun a destitute ex-factory worker with a gambling addiction stealing money from his elderly mother, and Cho Sang-Woo a high flying securities investor travelling the world, it is a surprise to one but not the other that they both end up in such horrors.

With our two key protagonists, four hundred and fifty six debt-strangled players are brought into the game. There are gangsters, math teachers, married couples; people from all walks of South Korean life. The games are simple and straight forward, and it’s a black and white, win or be eliminated situation. Once they start to understand what being “eliminated” means, however, terror begins to take hold.

The story between Seong Gi-hun and Cho Sang-woo is really well done. As is the growth of the surrounding cast as they build up and are then torn down. A favourite character of mine was Kang Sae-byeok, a North Korean defector trying to buy the safety of her family. In Australia, we rarely get much of a nuanced view into the differences of the north and south–it’s pretty much just articles about the hermit nation’s media’s big dick swinging, the population’s impoverished existence to pay for that big dick, and memes about the country’s dictator–so even just seeing a North Korean character through a South Korean cast’s eyes was interesting for me.

As with a lot of SFF/ horror from the vast and diverse Asia region, the scenery is chewed to absolute hell, at times it’s ridiculous as balls, there are plot holes the Wallabies forward pack could power through, and there are plenty of jaw-on-the-floor moments that I absolutely loved. Just pure, magnificent, gory fun.

Asian nations continue to pump out amazing television and film (eg. Alice in Borderland), and Netflix keeps translating them and giving us all access to them. Asia is probably one of the most diverse regions on the planets, and I am getting more and more into their crazy style of storytelling.

You can check out Squid Game on Netflix.