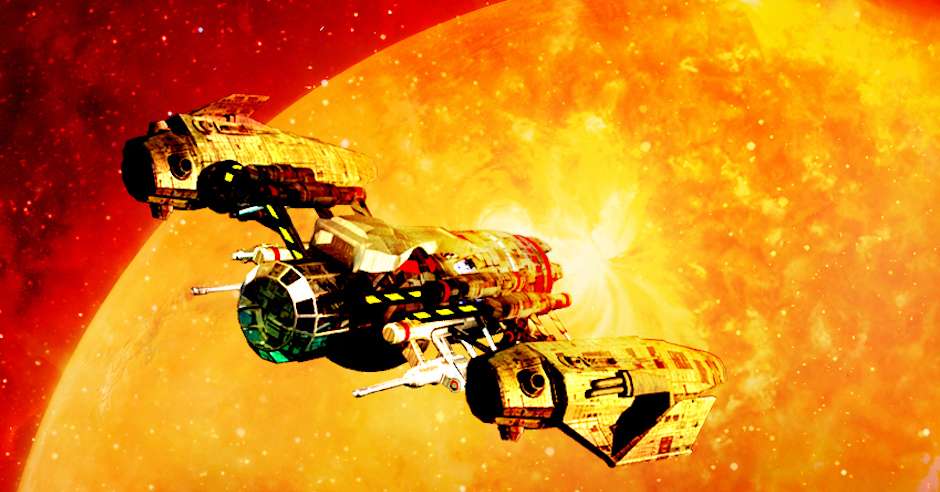 Gareth Powell has built a reputation for delivering well crafted and emotionally investing space opera with a fair share of humour, from Embers of War to Ack-Ack Macaque and his latest offering, Stars and Bones maintains that high standard. 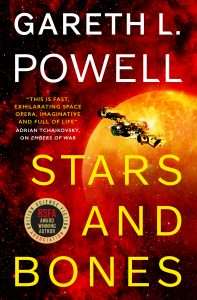 The story kicks off with a terrifying first contact situation with a malevolent lifeform that results in a ship & crew being lost and sets up the search & rescue effort that introduces us to our core character, Eryn – who’s sister Shay was on the ship that’s gone missing

Stars and Bones then skips back in time to explain how humanity made it to the stars and it’s one of the bleakest, most cosmic horror inducing but weirdly hopeful versions of that trope I’ve found. It also includes a pretty direct criticism of the current UK government which is extra chilling given current world events.

Suffice to say that humanity – or ‘the Continuance’ now travel the stars in a fleet of sentient and characterful ark ships having been simultaneously saved from self destruction, then evicted from Earth by a higher power. The only problem is that now their scouts have encountered a hostile alien grey goo and the whole human race is in danger.

That’s a pretty epic set up and an interesting setting with humanity evicted but comfortable, space faring but not really deserving to be and under threat because we poked under the wrong rock.

So far, so space opera for Stars and Bones, with extra grimdark points for the visceral terror of the alien threat that Powell describes so eloquently that there were a few times I really should have put the book down to get some sleep, but couldn’t because I needed to get to the end to make sure these things weren’t still out there.

As with most quality space opera, the core of Stars and Bones is more human-scale, with Eryn looking to first find her niece Maddison and then keep her safe, while dealing with a potential romantic relationship amidst this end-of-the-world scenario. Eryn’s grief for her sister and determination to protect her family are the bedrock of this story and it really anchors the high concept elements.

Maddison is a well realised, feisty yet traumatised teen; Li Chen is a nuanced romantic interest and most of the other characters fill their roles adequately but are really stage dressing for the antics of the core. It’s also worth paying credit to the Furious Ocelot, Eryn’s sentient ship that she’s dream-linked to as it’s navigator. The Ocelot, via it’s blue-skinned avatar is a constant companion and protector throughout Stars and Bones and shows genuine humour and character. I don’t love it quite as much as I loved Trouble Dog from the Embers of War series, but it’s close.

Powell is an eloquent and engaging writer who manages to balance epic exposition, jaw dropping action (or horror) and introspective personal moments without ever losing control of the pace. Stars and Bones never drags, I found myself always caring about the outcome – even more for Eryn and company than the notional destruction of the human race.

All in all, Stars and Bones is a grand read, full of action and emotion and if you’ve liked Powell’s previous work, you’ll like this. Fans of Iain M. Banks and Stephen Baxter or stuff like Alien or The Expanse will enjoy it too.