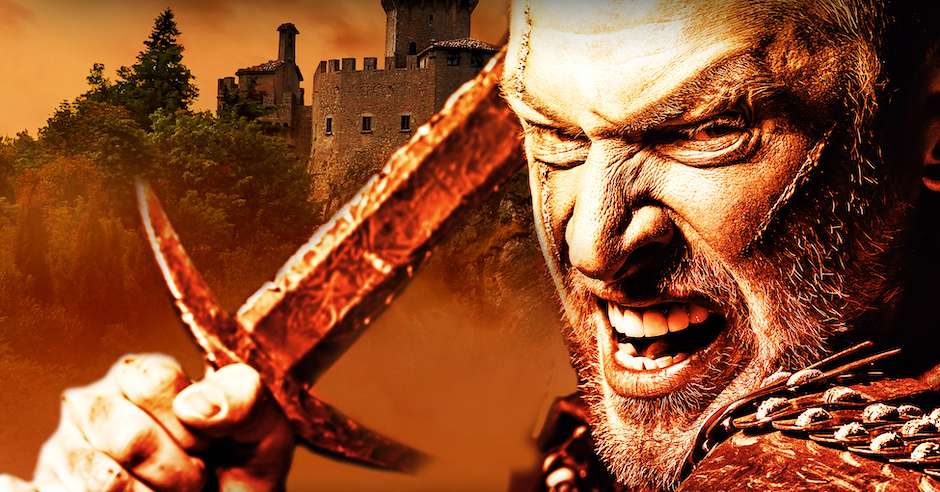 I like my fantasy pitch black and unapologetically adult. It’s a subgenre that has favored stalwart artists like Joe Abercrombie, Mark Lawrence, and Richard K. Morgan. It has also provided opportunities for newcomers like M.L. Spencer, Rob J. Hayes, and Richard Nell. Now a new name can be added to the latter with Allan Batchelder’s Steel, Blood, and Fire. 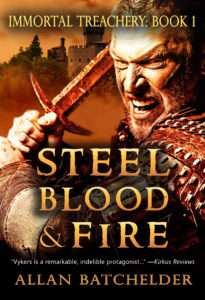 Steel, Blood, and Fire is about a Conan: The Barbarian-esque hero who gets hired by a corrupt old queen to take down a genocidal warlord whose armies are marching through her lands like a swarm of locusts. No one in this trio is a good person but whoever brings the conflict to an end swiftest will get to bear the mantle of hero.

Vylers is a once-great warrior who is a little past his prime and only going to go downhill from here. It’s a sorry fate for a warrior and he is less than pleased about it. However, younger heroes and villains have risen that threaten to dwarf his legend. One of these is the “End of All Things” who is a madman possessed of mystical powers that allows him to ravage across the land, recruiting the survivors into his ever-growing army.

The End of All Things has no desire other than to plunder and forge an ever greater brutal legend for himself. Vykers is no saint and is more confused at this genocidal campaign than repulsed but finds himself recruited by the “Virgin Queen” (a bitter old crone) to eliminate him–because what else is he going to do with his remaining years? It helps that he has a ghost in his head forcing him to act to his quest (or he will lose the one thing he has left: his fighting prowess).

This is not a book primarily centered about Vykers, though, but a story told from multiple points of view in a fantasy war. The End of All Things is a somewhat one-dimensional madman but everyone else is kind of an asshole too. Vykers is more Logen Nine Fingers than heroic paladin but there’s an entire company of peasant warriors just trying to survive the war and make a bit of money on the side. I’m also a fan of Aoife as a young nun-like witch is forced from one trauma to another due to the evil afflicting her brother.

Allan Batchelder is a master of combining the hilarious with the horrifying. One of the earliest scenes in the book is a young boy being told he’s the Chosen One in order for the aforementioned peasants to impress him and send him off to the war. They’re terrible at it but their mark is dumber than a sackfull of rats. Hypocrisy and greed are the primary attributes of his characters and it just makes them all the more enjoyable.

I’m a fan of the characters who manage to be distinct and entertaining throughout. The mercenaries are a bumbling band of fools who are, probably, going to get themselves killed but that isn’t something they worry about since they might get paid before it happens. Vykers is also an arrogant blowhard who, despite suffering recent injuries, is eager to get back to doing the very things which got him in trouble in the first place. He’s also stuck with a moralizing ghost in his head which doesn’t want to share his form when he goes whoring about. Arune is wise but frequently exasperated with his barbarian “partner.” I’m also a fan of Aoife as a young nun-like witch is forced from one trauma to another due to the evil afflicting her brother.

The world-building is consistent but minimalist. This book doesn’t waste time with descriptions of ancient histories, Gondor’s relationships with Numenor, and other tidbits. Instead, we meet the queen, we meet her rivals, and we find out about ancient lost cities when they need to be visiting. This isn’t a bad thing, though, because the world maintains some mystery and it has enough character so as not to be a generic setting either. The book has a lot of show, don’t tell, which I appreciated. We get insight into how the people live by having characters talk about it and that works far better than trying to describe the details. It’s a dirty, smelly, sleazy sort of kingdom and that comes across through the characters.

The action in the book is great with the fights being quick, brutal, and unromantic. Vykers is reputed to be a legendary warrior who could kill two hundred men but he’s “only” able to kill about six at a time. There’s a sort of Howardian feel to things that is mixed with an unromantic working class sensibility to the heroes. One of them is a gigolo, for example, and he discusses (at length) how his business works in a Medieval fantasy world. Magic is shown to be useful but not overwhelming, allowing armies and regular warriors to be relevant.

In conclusion, this book is just fun and I’m eager to read the rest of the books in the series. The humor, action, and cynical world are all things which made it an enjoyable reading experience. People should definitely check this out as a great example of indie grimdark. You won’t regret picking it up.