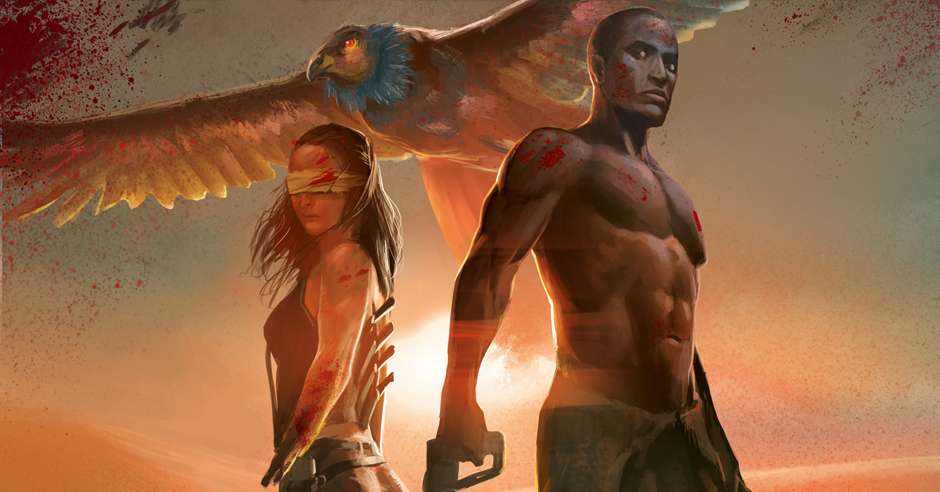 Swarm and Steel, Michael R. Fletcher’s new standalone novel in his Manifest Delusions world, is a horrific book. I don’t mean that in a negative way, quite the opposite. It is one of the grimmest, darkest books I’ve read, and I loved it. The story is a heartfelt tale about two lost souls, who’ve never truly had anyone they cared about, finding solace in each other. It just so happens that one of these characters is a rotting corpse, and the other is an insatiable cannibal.

The plot revolves around a church that worships suffering and two unlikely protagonists’ relentless desire to destroy it. Our main protagonist, Zerfall, wakes up in an alleyway with the back of her head caved in. With no memory of her past, she sets off to escape the strange people who pursue her by fleeing into the desert, armed with nothing but a few knives, a book of terrible poetry and a banknote. Meanwhile, Jateko is a teenage warrior of the Basamortuan tribes, who spends his days being rejected for raids due to his weakness and small stature. The lives of Zerfall and Jateko become bloodily intertwined and things swiftly go downhill. Way, way downhill. Zerfall and Jateko are the main point of view characters, but we also see through the eyes of Aas, an intelligent yet repulsive shape-shifter who is hunting them down, and Hölle, the wounded leader of a pain-worshipping Church that seeks to send all of humanity into the Swarm, a hell of endless, naked humanity. All of them are broken, insane people, but after gaining insight into their backstories, it’s easy to understand why they are the way they are, and how they are victims themselves.  Fletcher has developed a deft hand at creating essentially grimdark characters, it’s hard not to like these protagonists, despite the fact that they are, objectively, more ‘evil’ than most of the protagonists in the earlier Manifest Delusions books. Fletcher’s narration is a very close third-person limited, and much of the writing is about the internal conflicts of the characters, which is fitting for a book about insanity. It’s easy to read, which, given the heavy content, is a relief. 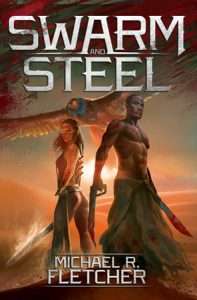 The world is just as messed up as the characters, as you’d expect from a place shaped by the beliefs of a society of grimdark characters. One of the characters, Hölle, even remarks upon this, musing that “filth and depredation — deceit and violence — lay at the core of every human soul; reality offered irrefutable proof of this. This could be utopia and instead we make it our hell.” Garbage and corpses line the streets of the city-states, and everything is bleak and gray. Reality twists at the whims of the deluded, warping space, time and perception. The internal logics of insane people, and the nuances of their delusions, are well expressed. One nice addition in this book is that about a third of the book takes place in a desert, among the Basamortuan tribes, providing contrasting light beyond the relentless gray. The city-states that form the core setting of the Manifest Delusions world fit the tone of the books well, but after three books set in them, a shake-up was definitely needed, and Fletcher provides it with an equally-bleak yet totally different setting. One area in the desert is even filled with thousands of undead corpses embedded in cacti. It’s also interesting to see how other cultures rationalise the insane world they find themselves in, and Jateko’s perspective on the world is completely different from any other character in any of the books.

However, one complaint I have is that most of the character and place names are German words that relate to the nature of that character. For example, the banking city that the plot centres around is called ‘Geld’, which means ‘money’ in German. As someone who speaks a bit of German, this threw me out of the story every now and then, since it seems unlikely that, for example, Aas (‘carrion’), would be given such a name at birth, as seems to be implied, when he only developed the ability to shapeshift into a carrion-eating condor in his late childhood. Fletcher also uses Basque words for the names of the Basamortuan tribes (Basamortua means ‘desert’), but this wasn’t distracting to me since I don’t speak Basque. On the whole, I’m conflicted about this use of language, since on one level it’s immersion-breaking, but on another, the German words suit the dreary world of Manifest Delusions so damn well. Overall, it didn’t really hinder my enjoyment of the book, and is only an issue of you speak one of those languages, and Fletcher even expresses an awareness of this in a tongue-in-cheek note at the beginning of the book, where he apologizes to German speakers for his ‘horrendous borrowing of their language’.

The pace  of Swarm and Steel is quick, and I once found myself late for work because I’d lost track of time reading it. It’s easy to get sucked in to Zerfall and Jateko’s journey, and more specifically, their brilliant character arcs. Each of them is unrecognisable by the end of the novel, a completely different person, and this is handled so deftly that it creeps up on you.

Fletcher dials the grimdark notch up to eleven, and when you find yourself laughing over a funny moment of light-hearted banter between the protagonists as one of them is cracking ribs open to get at a deliciously still-warm human heart, you know the author is doing grimdark right. As one character remarks, “’Evil is doing the right thing no matter what the cost.’ She laughed without humour, tears spilling free. ‘Evil is thinking you know what the right thing even is.’”.

Personally, I had great fun with the book, and found it to be my favourite of Fletcher’s work yet. Zerfall and Jateko are a good duo, the world is explored in more depth than ever, and there’s real thematic depth that stuck with me after finishing. Fletcher is clearly staking out turf on the dark end of grimdark, and he’s publishing books with pleasing regularity. This book is proof to any doubters of grimdark out there, that a book can be absolutely, unrelentingly dark and still not be ‘gratuitously’ so, if handled b