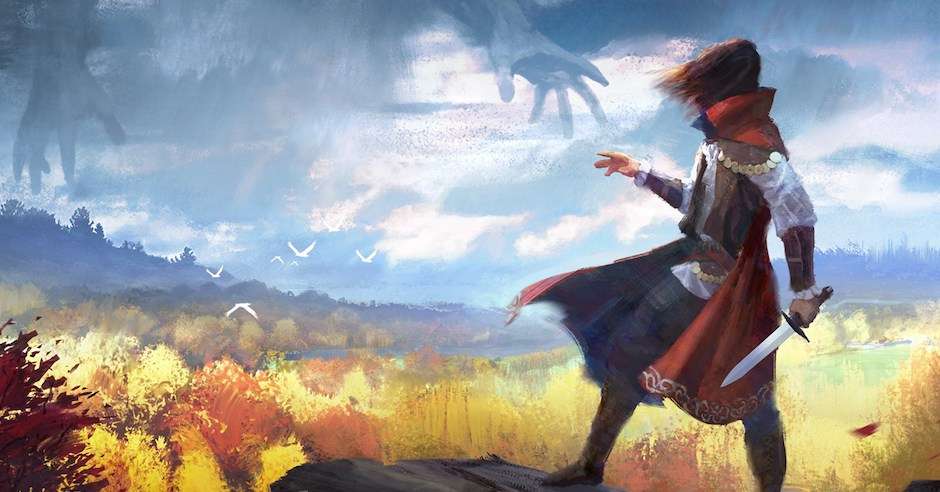 I received an advanced review copy of The Bard’s Blade in exchange for an honest review. I would like to thank Brian D. Anderson and TOR for the opportunity. 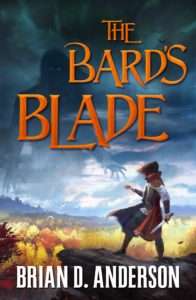 Vylari is hospitable and picturesque although quite mundane environment where we are introduced to the two point of view characters that we follow throughout the narrative. Lem is an extremely talented musician, arguably the greatest in Vylari despite his relatively young age, and he plays a balisar. Anytime he plays he takes audiences through a whole plethora of emotions with his exquisite musicianship and will always be the reason that town squares are filled to the brim everywhere he frequents. The second main character is Mariyah, Lem’s betrothed and the daughter of a winemaker. She’s strong-willed, extremely good with numbers and her’s and Lem’s relationship seems perfect. Lem travels as a musician so they aren’t together that often but when they are with each other they fall back to place together comfortably and in perfect harmony.

All seems pleasant. That is until one evening a stranger crosses the barrier. The barrier is constructed by magical powers that are beyond the capabilities and understanding of anyone currently alive. It was constructed to keep the fabled magic, evils, and monsters from the land of Lamoria away. The stranger prophecises that an envisioned shadowy character could lead the whole world, and all that Lem holds dear, to utter annihilation. After being advised of the part he must play to withstand and confront the predicted and foretold destruction, Lem crosses the barrier alone with very little other than a few coins and his trusty musical instrument to try and save those he cares about.

The majority of the story takes place in the mysterious Lomaria. As it transpires Lem and Mariyah both cross the barrier but not together. They both have intriguing, unpredictable and very different escapades in this world that they know nothing about. They are both extremely likable characters. It was never going to be as simple as the good guys get what they want and get married though. Many of the ensemble members are schemers, betrayers, brutes, and at the same time extremely religious. I’d hate to know what would happen to people who didn’t know/understand/follow their religion! (I’m joking, I know and the punishments aren’t nice.) If we add the religious sect with the monarchy, assassin orders, an obscure magic cult and touring theatre groups… There is a lot going on for our young heroes this side of the barrier. It’s going to be difficult enough for them to survive a single day. Let alone save the world from some shadowy being who’s looking to escape from his prison and wreck havoc.

Anderson’s prose flows effortlessly and the world-building is of picture-perfect top quality. To learn more about the history, religions, and laws of Lamoria, we are introduced to them as the characters are for the first time which accentuates the affinity we feel for the main players. In addition to the main characters, the narrative is littered with colourful and well-crafted individuals throughout. Personal favourites were the psychotic pub-owner Zara, mysterious troupe-leader Farley, and good ol’ hundred plus year old uncle Shemi. The latter is one of the only people either Lem or Mariyah truly trust.

The Bard’s Blade is an engrossing and stimulating modern fantasy epic that features magic, music, assassinations and betrayal every step of the way. It’s the first step in what I predict will be an incredibly impressive fantasy trilogy. This narrative seemed to be a successful mix of some of the finest elements of James Islington’s The Shadow of What Was Lost, Patrick Rothfuss’ The Name of the Wind, and Anderson’s own The Vale: Behind the Vale. Like the majority of The Bard’s Blade, the ending is unpredictable and it truly pulls at the heartstrings. (No music pun intended.) I read the last couple of scenes numerous times as I thought they were outstanding. This tale works expertly as a standalone which is always good news when potential readers are considering their next big fantasy undertaking. That being said, it sets up more than enough intrigue and drama of what could occur next in Lem and Mariyah’s stories. I’ll definitely be picking up the next entry as soon as it’s available. The Bard’s Blade has everything fans of epic fantasy will be looking for on their next big adventure. Highly recommended.

[…] Brian D. Anderson – The Bard’s Blade I said: “Magic, music, assassinations, and betrayal . . . a successful mix of some of the finest elements of James Islington’s The Shadow of What Was Lost, Patrick Rothfuss’s The Name of the Wind, and Anderson’s own Behind the Vale . . . everything fans of epic fantasy will be looking for on their next big adventure. Highly recommended.” (Full Review) […]