I came across The Book of Dragons anthology, edited by prolific, award-winning editor Jonathan Strahan, while I was looking for a good upcoming book to review. Of course, I always look for something grim and, well, dark because that is what I and our readers enjoy. I was wary, of course; I didn’t want to accidentally stumble into any high fantasy noblebright nonsense. (Kidding! Nothing wrong with that stuff, just not my cup of ale.) But I felt myself yearning nostalgically for a battle or two with a dragon. To be honest, I miss Wiglaf, and I wanted to see if I could find him here. I did not. However, I did find many extremely well-written, if somewhat unconventional, dragon stories and poems, and best of all, a new story by Grimdark Magazine favourite author (and extreme recluse these days) Scott Lynch, which is almost itself worth the cover price (of the Kindle version at least). 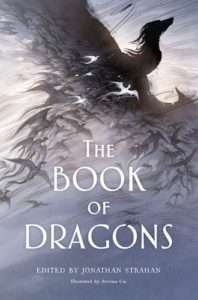 I never read reviews that just run down the plot blurbs of each story, so I won’t do that here. Nevertheless, in this diverse and extensive anthology you will find stories about a girl who sells her dragon for tuition money, dragon domestic squabbling, a society that uses dragon energy, a beautiful poem by everything-award-winner Jo Walton about the Norse dragon Nidhog, a dragon spirit summoned by a mobster, the son of a knight who captures a dragon for his father to battle, a girl who loves Le Guin’s Earthsea novels visits San Francisco’s Chinatown for the first time, a girl who sacrifices her younger sister to mollify dragons, an exile sentenced to prepare a new planet with a dragon, a guy who falls in love with a dragon at the University of California Berkeley, a school bus chased by a dragon, a society that sacrifices destitute widows to demon-eating dragons, a dragon procured for a puppet show, a dragon woman who hoards foster children, a girl and a demon boy who want to become dragons, a woman who gives up being a lawyer to live with dragons, and more and more. By now, you can tell that this is not an anthology of conventional dragon tales, which I found both good, since many, many clichés are avoided, and not-so-good, I was hoping for more real, old-school dragons.  There are, however, some very good and fairly grimdark stories here, which for me, made a well-written, surprising anthology all the better, so that’s what I’ll focus on.

One of my favourites stories in the anthology is “Where the River Turns to Concrete” by Brooke Bolander. It’s a contemporary tale about a river dragon summoned to work for a mobster. Aside from the violence and the grim urban setting, this one falls squarely into the grimdark realm thanks to the moral ambiguity of its main character, Joe. Joe is a hired goon for mobster Raymond Sturges’s gang. He’s not sure how he became a mob thug, but the pay is good, he can’t remember ever doing anything else, and he’s suited for role both physically—he’s huge—and psychologically (or perhaps spiritually)—he feels no compunction about hurting and killing people. He was found by Sturges huddled and completely naked in the corner of a parking garage. He is grateful Sturges gave him something to do to support himself. However, when a meets a young woman and her young son at the apartment complex where he stays, he finds himself feeling other human emotions that he doesn’t know what to do with. In the end, of course, his two natures must clash violently and terminally. “Where the River Turns to Concrete” is not only grimdark (IMHO), but it contains the emotional intensity of the best shorties. Yes, it has plenty of action, but the emotional engagement is what makes this story special. You’ll have to read it to find out where the dragon fits in.

Another emotionally compelling story, which is both grim and dark, is “The Long Walk” by prolific fantasy novelist Kate Elliot. In this beautifully told story, a new widow, Asvi, is spared her social duty of taking the long walk to sacrifice herself to demon-eating dragons because her deceased husband has left her enough to subsist on. Less-well-off women must walk to the mountains to sacrifice themselves to the dragons, not only so the dragons will keep the demons away but also to avoid becoming a burden on society. However, when her family moves her from the big upstairs bedroom with a distant view of the dragon mountains into a lower level room with a view of the garden wall, she begins to question how much she really wants to live in her new role. Aside from being a grim tale of aging and women’s role in society, this story gives a penetrating psychological insight into the roles of family members, their relationships, and also a look at class stratification in society. Even more compelling, perhaps, is that it is exquisitely and vividly told, tense with emotion, and full of surprises. It is probably my favourite of the many excellent stories in this anthology.

I would be remiss here, I think, if I did not discuss Scott Lynch’s excellent story, “Maybe Just Go Up There and Talk to It,” since he is a favourite of our staff and our readers. Don’t worry, I won’t spoil it. The story begins after the nuclear explosions of World War II. (Yes, it is way out of the Gentleman Bastard’s world.) Soon after the war, strange grey clouds appear all over the world, and people soon discover that the clouds are leaving dragons on earth wherever they appear. At first a few hunters arm themselves against the dragons—an elephant gun proves to be a powerful weapon against them—but even when they’ve killed a few dragons, many more take their place. A down-and-out American veteran of the Pacific War, Emery Blackburn, is given the job of rural deputy sheriff as the police try to bulk up, but as the years progress, society finds they cannot control the dragon invasion, and the government writes off rural communities, including Blackburn’s own, as lost,. “Maybe Just Go Up There and Talk to It” shows that Lynch’s writing is as dense, vivid, and beautiful as ever. The story is full of human compassion, which perhaps its most compelling draw, but Lynch’s writing brings his dragons to life as frightening, deadly beasts. The dragons in the story are the most vividly and beautifully detailed in the anthology, and at the same time are probably the most vicious.  For me, though, Lynch’s writing is the grabber. His prose is dense and fast-moving, animated and eloquent, and full of wry humour and surprises. Yes, it made me pine for another Gentleman Bastard book. Please, Scott, you can do it!

All the stories and poems in The Book of Dragons are high quality, well written, and engaging. Although I enjoyed some more than others, I think most readers who enjoy reading about dragons and who enjoy diverse contemporary fantasy short stories will want to add this to their collections. Yes, I would rather be reviewing the next Gentleman Bastard novel, and though The Book of Dragons might not be ideal for readers who strictly read grimdark, it should definitely satisfy general fantasy readers and should serve as an excellent model for good short-story writing.

It was not what I expected, not what I’d hoped for, and not at all bad. I pretty much gobbled it up like Smaug at a harvest festival.