In The Burning Land, the fifth entry in The Saxon Stories, we follow the escapades of a 35 or 36-year-old Uhtred of Bebbanburg. He’s still Alfred’s oathman and has been residing in Lundune. The Danish warrior, and Uhtred’s ex-servant Haesten is an everpresent nuisance, but in this novel, we are introduced to the leader and lover of another force of Danes who are being problematic and threatening Alfred’s peace. Harald Bloodhair and Skade. Haesten informs Uhtred that Skade is Bloodhair’s woman, bitch, lover, and sorceress. He also kindly warns Uhtred that “if you see her, my friend, you’ll want her. But she’ll nail your skull to her hall gable if she can.” The Burning Land is about these Danish threats to Wessex and Mercia and the importance of oaths. 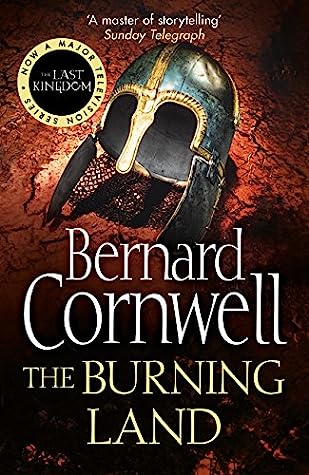 Recently The Saxon Stories series has been my go-to choice when I couldn’t decide between other books to read next. I find myself drifting back to them every 3rd or 4th book. My experiences with all of the stories so far have been 4 or 5-star reads and at approximately 300-pages I tend to race through these in under a week. The chapters here take about half an hour to read and I tended to devour 2 or 3 in a sitting. The Burning Land is more of the same of what has come before yet the series is nowhere near becoming stale, in fact, I’d say that as Uhtred is ageing his life experience and intelligence lead to really clever moments that are great to read. Such as a moment including bees and another with ships’ sails.

We still have battles, war councils, friendships, loyalty, and omens but, however much I have enjoyed the previous novels, I think this entry has been the perfect example of Cornwell’s strengths as a writer put on display. There is still humour featured in The Burning Land when the scenarios permit it, as there is dread, fear, and hatred. Uhtred’s utter loathing of Christianity is known throughout at least three nations and he doesn’t let that up in this entry either, as can be seen in quotes such as the below:

Folk tell their children that success lies in working hard and being thrifty, but that is as much nonsense as supposing that a badger, a fox and a wolf could build a church. The way to wealth is to become a Christian bishop or a monastery’s abbot and thus be imbued with heaven’s permission to lie, cheat and steal your way to luxury.

‘Æthelflæd remains your wife,’ I told him quietly, ‘but if she dies mysteriously, or if she sickens, or if I hear rumours of a spell cast against her, then I shall find you, cousin, and I shall suck the eyeballs out of your skull and spit them down your throat so you choke to death.’ I smiled. ‘Send your men to Lundene and keep your country.’

If I hadn’t received a review copy of one of my most anticipated reads of the year (R. F. Kuang’s The Burning God) then I more than likely would have just carried on with this series. At this rate, I will have finished the books that are already out before the release of the final novel, Wolf Lord, on the 15th of October. My fellow reviewer Edward Gwynne‘s reviews of the later novels remain extremely positive so it looks like I am in for more fine reading experiences with Uhtred, Finan, Osferth et al. Uhtred is 35-36 during this novel, not much older than me, and he is still in the front row of the shield wall or the first over the palisades. I’m intrigued to see if, and how, that changes as he ages further, yet I predict his importance will not be diminished. I really can’t wait to continue with Uhtred’s adventure and know for sure that I will be back very soon.