REVIEW: The Complete Chronicles of Conan

For sword-swinging, camel-punching action, there’s no protagonist who looms quite as large in the history of fantasy as Conan the Barbarian. Of course, he’s quite different in the books than the films—more cunning, more aware of deception. While I love the film, it’s a shame it looms so large in the public imagination compared to the fiction. 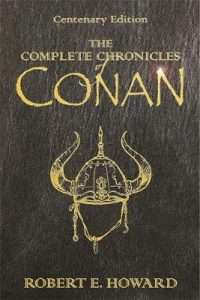 Every scrap, poem, and paper has been put into The Complete Chronicles of Conan. It takes the publication order of these stories, instead of the chronological approach that had been tried by L. Sprague de Camp.

This gives the whole book a feeling of sitting around listening to someone tell stories. It’s rare for someone to tell their life story in one long methodical rush, and this less methodical approach feels far more evocative for someone like Conan. We get stories of Conan being the King of Aquilonia, we get stories of Conan as a youth. We see him as a pirate with Belit, and a thief, all out of order but fitting together regardless.

Robert E. Howard’s writing style was crisp and vibrant. His mastery of action scenes is well-discussed, but he made even the smaller scenes strong. Background description made his Hyborean Age come alive. He was an absolute master of pacing, and even his longer works maintained a constant momentum throughout. His characters were never complex, but they were stark and bold.

With the exception of The Hour of the Dragon, they’re all short stories. In addition, The Complete Chronicles of Conan has three stories—Drums of Tombalku, Wolves Beyond the Border, and The Snout in the Dark—that are drafts, The Hall of the Dead, which is just a synopsis, and The Hand of Nergal, which is just a fragment of a never-finished story.

Of all the Conan stories, The Tower of the Elephant is one of the most famous, and feels the most like the ur-text for all other Conan stories. Conan and a thief team up to rob a wealthy wizard of his treasure, and that wizard has powers, and victims, greater than expected.

“’Take your sword, man, and cut out my heart; then squeeze it so that the blood will flow over the red stone. Then go you down these stairs and enter the ebony chamber where Yara sits wrapped in lotus-dreams of evil. Speak his name and he will awaken. Then lay this gem before him, and say, “Yag-kosha gives you a last gift and a last enchantment.” Then get you from the tower quickly; fear not, your way shall be made clear. The life of man is not the life of Yag, nor is human death the death of Yag. Let me be free of this cage of broken blind flesh, and I will once more be Yogah of Yag, morning-crowned and shining, with wings to fly, and feet to dance, and eyes to see, and hands to break.”

I am also a fan of the very similar story Rogues in the House, which adds in the twist of an angry and intelligent ape. Red Nails, another classic, has both a dragon and an ongoing blood feud between two factions in a secret city.

Read The Complete Chronicles of Conan by Robert E. Howard

If you liked this, you should try: 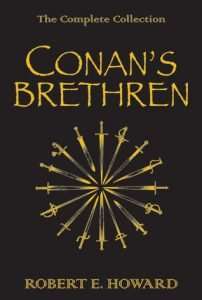 My absolute favorite story that Robert E Howard ever wrote is Worms of the Earth, a Bran Mak Morn story about how far the leader of a dying people should go for revenge. After a couple of his people are crucified by Romans, Bran Mak Morn embarks on a quest to see revenge through, including making a deal with a terrifying witch.

“There was a stir, a seething in the writhing shadows, and from the darkness crept, like a four-legg