REVIEW: The Damnation of Pythos by David Annandale 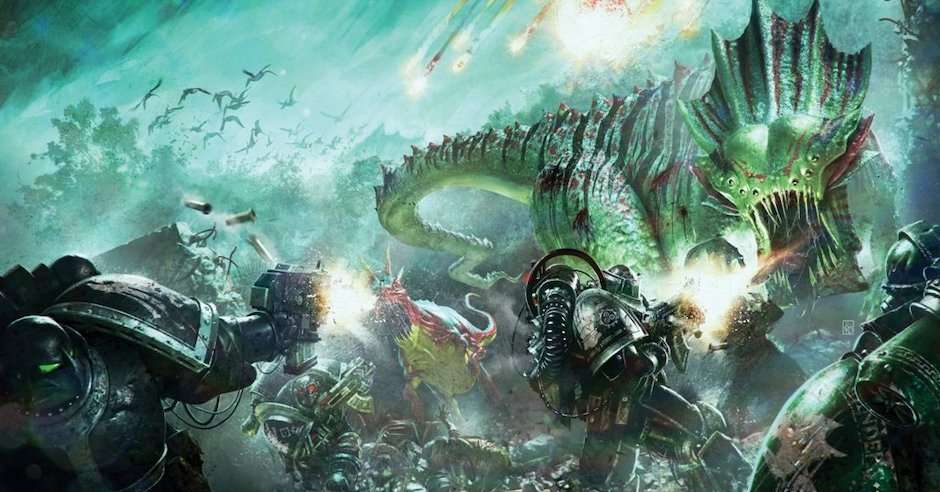 The Damnation of Pythos is the story of a small part of three broken legions trying to find a way forward. Treachery has destroyed them. Their differences in creed—Iron Hands considering the flesh and humanity to be weak; the Salamanders protecting people at all costs, and the Raven Guard assassins from the shadows—drive them apart as they try to figure out how to survive and how to strike back against Warmaster Horus and the corrupted legions of fellow space marines they once called brothers. 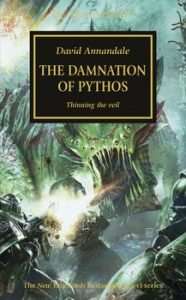 Galba is a sergeant standing between the anger of his mostly-machine captain (who left last of his humanity on the blood soaked fields of the Istvaan Dropsite Massacre) and the surviving leaders of the Salamanders and the Raven Guard, trying to broker a peaceful way forward between brothers so that they may wage war together.

Jerune is a Galba’s human serf. He works away in their ship, completing mechanical duties and cleaning Galba’s quarters. He sees fellow serfs beginning to go against the Emperor’s teachings and falling to—a concerning change in the shattered mess of humanity’s Great Crusade across the stars.

Atticus, captain of the Veritas Ferrum and leaders of the Iron Hands survivors from Istvaan aboard his ship, needs to not only save his legion as his progenitor and primarch lays dead upon Istvaan, but also needs to hunt traitors and get on the front foot. They are behind enemy lines.  Atticus is going to kick off a guerilla War.

Rhydia is a astropath, a long distance communicator whose signals leave reality to travel vast distances through the warp. She believes in the secular universe. A universe without gods. But the warp is whispering to her. A name. A place. Pythos.

In a bit of a break from the standard space opera and military SF fare of the Horus Heresy series, The Damnation of Pythos is a military SF horror where the planet and its inhabitants are the foe of the mighty Iron Hands, Raven Guard, and Salamanders. Traitor marines are few and far between in this story as Annandale explores the growing impact of insidious Chaos revealed on the atheist troops of The Imperium of Man.

As with each of these books, The Damnation of Pythos  has a distinct purpose in terms of explaining how we went from the Imperium in its Great Crusade Glory days to the Imperium represented in the board game and books 10,000 years later—but you’ll have to read the book to find out what. The question just really becomes, was the point of this book already covered off by other books? In my opinion—and there is a chance I’ve missed something important in this 50 book behemoth of a series—I don’t think it was. On the surface, the books tells the story of the Imperial bureaucracy drastically contributing to its own downfall, and I feel that the committed series reader already has a pretty solid grasp of that by this point.

So, in the end, while The Damnation of Pythos can be appreciated as a nature-horror-based-kind-of military SF, as a series reader 30 books deep into the series, this entry in the magnificent and grandiose Horus Heresy could have been skipped pretty easily. Will the happenings impact future books? I don’t know. It’s not really clear. I hope so, otherwise this read feels like something I didn’t need to continue to build my love of this series.

Read The Damnation of Pythos by David Annandale