I received a review copy of The Devil’s Blade in exchange for an honest review. I would like to thank Mark Alder and Gollancz for the opportunity.

This is the first time that I have read anything by Mark Alder. When Gollancz e-mailed me asking if I would be interested in reviewing The Devil’s Blade I was won over completely by the striking cover and the intriguing premise so I opted to check the book out. I have started reading more historical fiction recently so this novel ticked the box for me to continue that trend. I knew nothing about The Devil’s Blade’s protagonist (Julie D’Aubigny), whose real life this story is loosely based on, so I decided this novel would be an interesting entry point to find out about her. 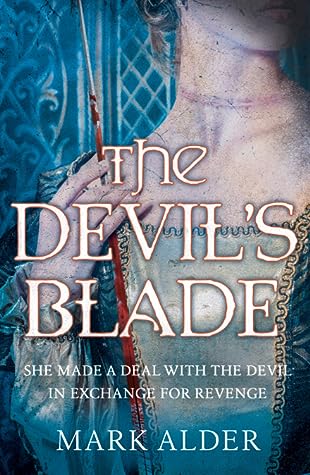 Set in 17th-century Paris, The Devil’s Blade begins when Julie is invited to sing on All Hallows Eve in a foggy wood for thirteen masked men of influence who call themselves the Tredecim. She sings beautifully for the gentlemen with notes so pure, clear and delicious. At the conclusion of her performance, it transpires that she was invited by the group to be a sacrifice. They wished to spill the blood of a lady pure and beautiful so that they could call forth the Devil to do their bidding. Unfortunately, Julie is not a virgin, and after heated exchanges with the gentleman, her friend Paval is murdered and her throat is pierced by a rapier. Whilst Julie is lurking at death’s door and about to pass, the Devil arrives at the scene as they were summoned. At this point, the men have left and because of their arrogance in raising them from the underworld, the Devil is a bit pissed off. Julie makes a deal with the Devil that if she lives she will murder the thirteen men, sending their souls to Lucifer. As some of the Tredecim will be notoriously difficult to kill, such as a three-fingered gentleman who is the self-proclaimed greatest swordsman in France, the Devil promises that in return for each soul they claim, they will reward Julie with one fencing lesson. If she is unable to present all thirteen souls to the Devil within one year then they will return and take her to Hell still living.

Written in the third-person present tense, The Devil’s Blade follows Julie D’Aubigny through three acts and numerous scenes. Being written in this manner makes the reader think that they are part of the play, that events are happening in real-time, and it connects us closely with Julie through the year’s events and the emotions that she feels. Each scene takes about ten to fifteen minutes to read so it is extremely easy to read just one more chapter.

I liked Julie’s character quite a lot. After the ordeal at the beginning, she loses her beautiful singing voice and one of her only friends in Paval, so I sympathised with her a fair amount, even when she was plotting the demise of those that had wronged her. She is clever, crude, sweary, not afraid to use her sexuality to get what she wants, and is a master of disguise. Lucifer granted her ghost sight which is a useful ability, and after delivering one soul she is given a fox scarf called Furie who can come to life. She was an able fencer to begin with yet as the Devil teaches her moves and techniques when she crosses identities off her list, she becomes an excellent swordswoman, causing havoc around Paris and building up quite a reputation. A reputation that earns her the moniker The Devil’s Blade.

“She will practise for the performance ahead, practise song, the art of life and the blade, the art of death.”

The plot of the novel is straightforward in how Julie moves from one target to the next but I didn’t find this tedious or repetitive. Some of the assassinations are excellently executed by the author (no pun intended) and thrilling to read. There isn’t that much to distinguish the thirteen gentlemen from each other, they are just names on her list after all, and we don’t find out that much about the majority of these characters other than that they are wealthy scumbags.

I always enjoyed the scenes where Lucifer popped up on the page. He/she/they are beautiful, charming, mischievous and notorious too. Other characters I enjoyed reading about were Julie’s highborn love interest Charlotte-Marie who is kooky and out-there, and her father’s sword-master Sérannes who is infatuated with Julie.

The Devil’s Blade steadily builds up to a fitting, fulfilling and exciting culmination. Alder wraps up everything nicely and makes it clear that this is only one period in Julie’s life and it would be easy for him to return to this imagined 17th-century France to detail more of her escapades. If he does, I am pretty certain I will check it out. At 370-pages this was a novel that I savoured rather than raced through, perhaps reading about the build-up to and then the act of one or two murders before then putting it down for a day or so before continuing. To conclude, I would describe The Devil’s Blade as a fine revenge-driven historical fiction adventure that features a strong and intriguing female lead. It’s full of love, infatuation, duels, deceit, disguise, murder, devilishness, and music with a lovingly crafted picturesque 17th-century Paris as the backdrop. The Devil’s Blade isn’t a perfect novel but I had a pleasant and entertaining time reading it and I give it a pretty solid 7/10.