There’s a febrile, hallucinatory quality to The Doloriad by Missouri Williams. It’s hard to quantify because it is so singularly non-linear, and that it seemingly isn’t actually about anything. 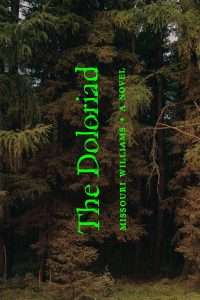 But maybe that’s incorrect. The Doloriad is, perhaps, an experiential exercise. It is, in fact, about experiencing the frenetically feverish narrative. About ingesting the sometimes delightfully, absurdly profound prose. There are, without a doubt, moments of truly inspired wordplay at work within the sometimes claustrophobic confines of The Doloriad’s pages. Moments that are evocative, that do more than simply create any kind of atmosphere but awaken vivid imagery within the mind’s eye that plays upon all the senses. Missouri Williams constructs passages that are equally mystifying and confounding; passages that left me staring after something a million miles in the distance like the titular, moon-eyed figure of Dolores.

For all of that, as inspired as the prose is, it is the wordplay and structure of The Doloriad that are also some of its biggest weaknesses. The perspective, a detached omniscient observer, moves without warning from one point to the next, jumps from one character to the next, without warning. Sometimes in the middle of a single paragraph you’ll find yourself inhabiting the headspace of two or three individuals—which is compounded by the fact that Williams pours everything into long, winding blocks of text that verge on the edge of rambling. Sometimes it almost feels as if The Doloriad is spilling in a heated rush from the mouth of a semi-delusional oracle, struck by inspiration and desperate to vacate their skull of a flood of words they can scarcely contain. It creates a tidal rush that pounds on and on, moving endlessly at a breathless pace that can occasionally be bewildering.

More than that, though, The Doloriad has a distinctly nihilistic lean to it. It exists in a fatalistic world somewhere on the other side of an enigmatic apocalypse that has all but annihilated humanity, leaving behind a handful of survivors to eke out something that could only generously be considered an existence. A cabal of family members who spend their days in the shattered hulk of a city ensconced in a labyrinthine forest who wile away their days in interminable nonsense and melodramas. It is in the observation of this family we discover that The Doloriad is about nothing so much as observing the—at times awful—activities of this family and its members as they crawl and clash and claw their way through an indecipherable stretch of time. Are they truly the last vestiges of mankind? Does it even matter? Are they all, to a one, utterly awful as if with the fall of civilization everything even resembling humanity itself has been obliterated from the survivors? Do they exist in a state of nature bordering on the primal where the only thing that matters is the satiation of urges? Does it even matter?

It doesn’t. In The Doloriad the only thing that matters is moving from the beginning that isn’t really even a beginning to the ending that can hardly be considered an end. The Doloriad is about the experience. A colossal moment built out of lesser moments that congeal to create something more, something less, something ultimately other. It’s not for everyone, not by a long shot, but it sits solidly with three stars as something truly unique that left me wondering about not so much the point of life but whether or not a thing even needs a point to begin with. The Doloriad is the debut novel of Missouri Williams and the breakout of a unique voice that maybe needs to be experienced.

Read The Doloriad by Missouri Williams