The Dread Wyrm is my favourite of the Traitor Son Cycle so far. It is a phenomenal book with epic pacing and some scenes that I will never forget. If you like books inspired by Arthurian Romance, with fearsome knights, horrific monsters and magic that will blow your mind, this series is the one for you.

“Those who have known pain should have mercy on others.” 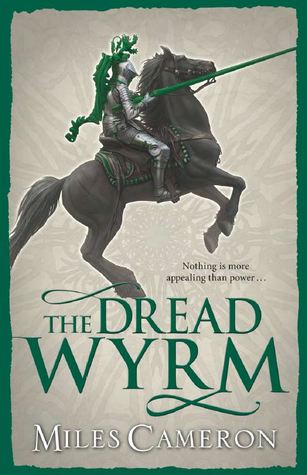 Number 3 in the Traitor Son Cycle, The Dread Wyrm picks up where The Fell Sword left off. It begins with our favourite characters such as Red Knight in a tavern giving a run down of the events so far. This beginning gave an excellent recap of what has happened in this medieval land and ensures that the reader is up to date with the players and the plot. Without delving into the plot I’ll just say there is a big tournament, intense politicking, almighty battles, an unlikely alliance and one of the greatest duels I have ever read.

“But all you have to do is lie. If enough people lie, all the time, then there isn’t enough truth for law to work. That’s how I see it.”

We follow our favourite characters like Gabriel, Sir Gavin, Bad Tom, Sauce and Michael as they move ever more into danger and make a play for something far more daring than they’ve ever done before. There are new faces and old and each storyline begins to merge in this book, the strands finally coming together making the first two novels completely understandable. From the large cast we are able to see many different personalities and their lives and we are able to enjoy the vast world that Miles Cameron has created.

“War is food and drink and disease and patience and anger and hate and cold and stealth and terror as well as sweet silver and bitter iron and the glitter of arms in the sun or under the moon.”

This is medieval fantasy at it’s finest – especially as it really feels medieval. From the bright, tight clothes to the deadly weapons and shining ‘white’ armour to the way the characters speak, everything is inspired straight from the 14th-century world. Just with dragons and other terrible beasts. The creatures in The Dread Wyrm have a large part to play and they as always shined in each and every scene.

“My da—” Diccon looked at the ground. “… my da calls me ‘Bent.’”
Robin smiled. “No. Sorry, Diccon. It’s a good name, but a master archer had it and it died with him. Got another?”
“My mother calls me a God-Damned Fool,” Diccon said with a smile.
“Good, you’ll fit right in.”

With any Christian / Miles Cameron book, there is a highlight on the combat. The intricate sword plays, jousts and even magical battles are written terrifically. They are able to be exhilarating and informing all at the same time, The Dread Wyrm ramps up the action and is written in brutally efficient set pieces. I will also add that also the subtle details of clothing and life are written so well, that I found myself wanting the combat to hold on for just a second so I could read more lines about how the tournament was organised, or how a doublet was worn.

“A battle was a situation where two commanders each thought they had a decisive superiority and one was wrong.”

5/5 – I loved this book so much it has cemented this series so far as one of my favourites to date. There are the big epic clashes, the intense plans and masterful dialogue, along with intricate details that add a whole lot to the world building. The Dread Wyrm is a five star read!